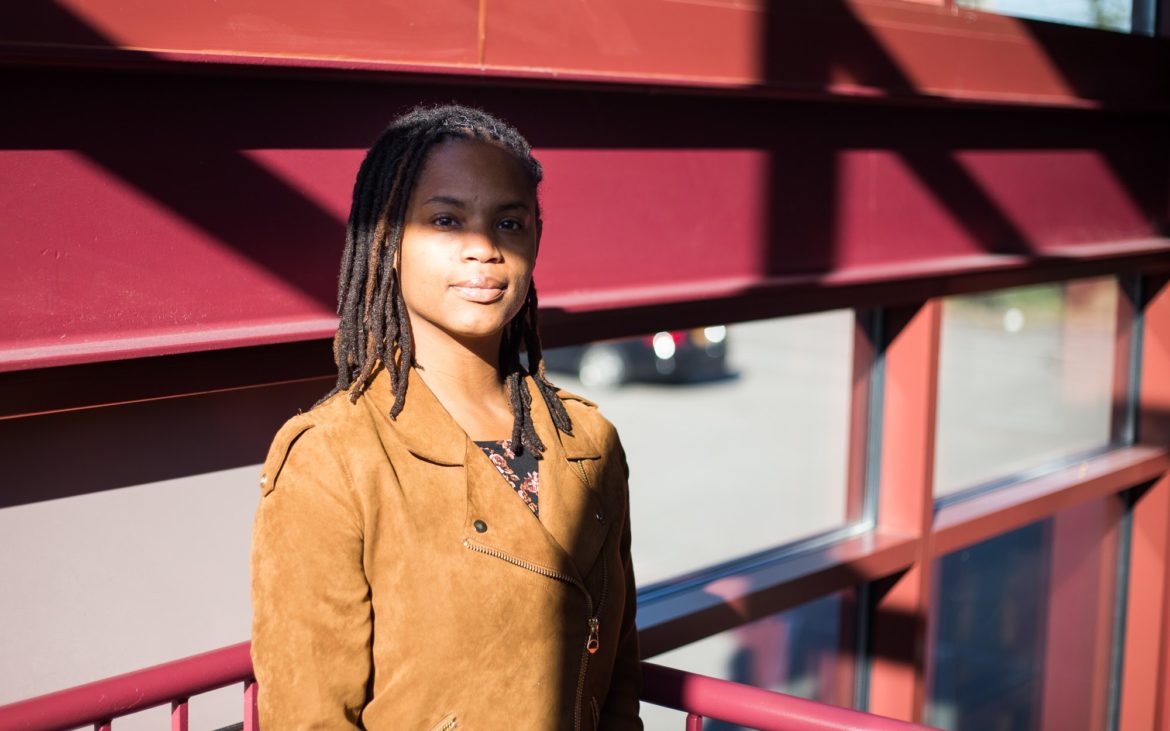 Shanon Williams, director of community education at CeaseFirePA, poses for a photo at the Jeron X Grayson Community Center in the Hill District. Williams was hired to lead the group's effort to trace the origins of illegal guns in Pittsburgh. (Photo by John Hamilton/PublicSource)

Pittsburgh has a tough time coming clean on illegal guns.

Despite promises of transparency and an embrace of data-driven policing, the city has for years resisted telling the public almost anything about sources of illegal guns.

According to Pittsburgh police: Releasing information on the sources of illegal guns is either banned by federal law. Or state law. Or it simply isn’t compiled.

However, PublicSource learned the bureau does routinely compile information on guns that will be traced, and we were able to obtain firearms seizure data from five other Pennsylvania police departments.

In Pittsburgh, police collect troves of data that would paint a vivid picture of firearms trafficking in the region, if only they took a deeper look.

“It’s just in a report somewhere,” said Shanon Williams of CeaseFirePA. “So what we did was we went to the police, ‘Look, we can run that information.’” Assault rifles with scopes and extra clips for ammunition are among the guns that an area ATF agent is attempting to trace after being recovered by law enforcement. They are kept in an evidence vault in a downtown Pittsburgh field office. (Photo by Guy Wathen/PublicSource)

In 2013, Williams had an ambitious goal of taking a murky web of data on seized firearms and translating it into an easy-to-read report on the origin of illegal guns. It didn’t go smoothly.

Pittsburgh police cooperated at first, providing a half-year of firearm seizure data for 2014. It didn’t reveal anything more than zip code and census tract, but that’s more information than Pittsburgh police had previously given out publicly.

“There was some really, really interesting things in that report that I was freaking out about, like, ‘Look, look, look,’” Williams explained.

Pittsburgh Mayor Bill Peduto loved the project, Williams said, contributing added muscle from his office to expand the effort. But the report fizzled when a city analyst discovered that police wrongly included data on perfectly legal guns, rather than illegal weapons the report intended to isolate.

Suddenly the data — which police did not correct for CeaseFirePA — was worthless.

The project remained stalled through the entire tenure of Chief Cameron McLay, a champion of both data and police transparency. When asked for comment on the project, the mayor’s office initially referred PublicSource to CeaseFirePA.

"It’s not like anybody’s paying attention and adding up in their head all these traces."

When asked about the gun tracing program Thursday, Peduto said he had not received an update from city police on it in “over a year” but that he supports making gun trace information public.

“It should be,” Peduto said. “It was always the intent to be able to track source of purchase and then to use that data in order to be able to lobby the state for common-sense reforms.”

A police official authorized to discuss the project said on Sept. 28 that he needed to learn more about it before speaking in detail. “I know that attorneys have changed over,” said Deputy Chief Thomas Stangrecki, referring to the city-employed lawyers. “Leadership has changed over as well.”

On Thursday, Stangrecki returned a phone call seeking additional information and said he would still need to look into the matter.

After months of back and forth with the current slate of city attorneys and police leadership, PublicSource was able to uncover new information: Since 2012, Pittsburgh police seized roughly 3,600 guns from suspects. About 2,600 of those appear to be illegally carried, based on a PublicSource analysis of charging data provided by the bureau. While this database gives a first-time look at the prevalence of illegal firearms in Pittsburgh, it gives no information on the origin of firearms.

Meanwhile, Chicago and New York state issued robust reports on illegal firearms, far beyond even what Pittsburgh’s initial data would have shown.

Chicago’s report, published in May 2014, maps the sources of roughly 18,000 traceable guns used in crime over a five-year period, going so far as to single out specific gun stores responsible for the sale of disproportionate numbers of illegal guns.

Chicago tracked the origin of guns used in crimes that were recovered in the city and then publicly released the results. Previously, police had hunches, but not a deep dive into their data, said Max Kapustin, research director at Urban Labs.

“It’s not like anybody’s paying attention and adding up in their head all these traces,” Kapustin said.

The Chicago Police Department (CPD) gave the Crime Lab access to their crime data, including information on shootings and the origin of guns. Through the partnership, the public can see the links between illegal guns and violence and police have access to in-depth, recurring analysis.

“Direct your local [police] to contact CPD and ask if it’s beneficial,” Kapustin said, of the Crime Lab’s work. “I’m willing to bet they will say yes.”

New York’s attorney general went even bigger, publishing an interactive report on the sources of 53,000 guns used in crimes between 2010 and 2015.

The state has some of the country’s tightest handgun restrictions, and the office wanted to find out how so many New Yorkers were still dying in gun violence.

The New York Attorney General's office lists Pennsylvania as one of its top sources of trafficked firearms. The office, using data provided by the Bureau of Alcohol, Tobacco, Firearms and Explosives [ATF], created an algorithm to judge when recovered firearms seem to be illegally trafficked and it named Pennsylvania among the “Iron Pipeline” of states supplying trafficked guns to New York.

Is anyone keeping track?

In the meantime, journalists have repeatedly tried to get any kind of data from Pittsburgh to explain how guns are getting to crime scenes or into the hands of children.

Pittsburgh City Paper last year wrote about the roadblocks it faced in trying to learn trace information for weapons recovered in 2015, along with the CeaseFirePA’s ordeal.

PublicSource made similar inquiries and were told that even basic totals of the number of guns traced could not be released due to ATF restrictions. The ATF confirmed that Pittsburgh was bound by an agreement not to release trace data, though summary data has been released by others, including the ATF itself.

Meanwhile, the Pennsylvania State Police told us they had processed 946 handgun traces for Pittsburgh in 2016.

A state police spokesman said that while specific information from sales name – for instance a gun buyer’s name – can’t be released, he wasn’t aware of a ban on anonymized information.

Why didn’t Pittsburgh provide this information itself? Rob Conroy, director of organizing for CeaseFirePA, attends a vigil held at the City-County Building on Oct. 3, 2017, in response to the Las Vegas shooting. (Photo by Ryan Loew/PublicSource)

PublicSource later learned that detectives in the unit regularly receive a spreadsheet of details on recently recovered firearms, which the bureau will trace. This fact was not mentioned during the interview or in numerous attempts this year to learn how the bureau may be compiling or analyzing this data.

Philadelphia, for instance, provided a spreadsheet of 3,800 firearms traced by the ATF in 2016.

Since 2014, Wilkinsburg police seized at least 160 illegally carried firearms, based on data that identifies violations of the state’s Uniform Firearms Act.

PublicSource asked Pittsburgh in July for a clarification on the data it did provide. It was then that a city lawyer realized that information the city deems non-public was mistakenly released. PublicSource was instructed to destroy the database and instead use a revised version, which omitted even the most basic information on the guns recovered.

After PublicSource posed additional questions, the bureau in late September provided a case-by-case listing of guns seized and recovered in recent years — essentially restoring the information they previously asked us to destroy.

Additionally, the data shows only when guns were thought to be illegal from the outset — for instance if they’re carried by a minor or a known felon — and could be missing many more guns that police later learned are owned by someone other than the individual carrying it.

To date, the most conclusive information we have on the prevalence of illegal guns locally comes from a study last year from the University of Pittsburgh. But it’s only a single year of data. So we know that in cases from 2008, nearly 80 percent of guns recovered from suspects were owned by someone other than that person.

To come to that conclusion, researchers compiled data from hundreds of paper records, according to study author Anthony Fabio, an epidemiologist at the university.

The study itself is both simple and groundbreaking because it used hard numbers to quantify how often guns seized by Pittsburgh police are found to be illegal.

Fabio said police provided the data he asked for, but now that the study wrapped, the open question is if anyone else is keeping track.

“Given that it was so simple and such basic information, but yet it was never done and it was unprecedented is a scary thought,” Fabio said shortly after his study was published last year.