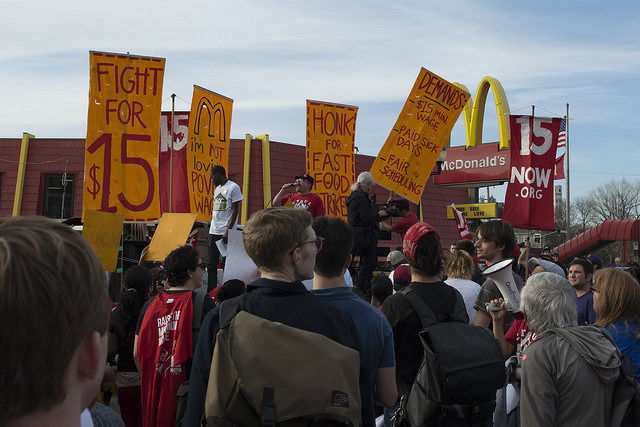 Protestors outside of a McDonalds in Minnesota

Pittsburgh Mayor Bill Peduto issued an executive order Tuesday that will incrementally increase the minimum wage for full-time city workers to $15 an hour by 2021.

Workers earning $15 an hour would make $31,200 before taxes, compared with $15,080 for current minimum-wage workers who earn the state and federal minimum wage of $7.25 an hour.

Boosting wages to $12.50 an hour will cost the city an additional $150,000, according to the city. No other cost estimates were given by city officials.

The city said the change would affect about 300 employees, according to its press release. That’s about 10 percent of the city’s workforce.

According to 2012 and 2013 city salary data previously obtained by PublicSource, the move would affect roughly 100 crossing guards, who are listed as full-time city employees in the data provided by the city, more than 70 clerical positions and some 40 to 50 garbage truck drivers.

However, if each city employee was given a 1 percent raise every year for the next six years, slightly more than half of those 300 employees would reach the $31,200 threshold by 2021 anyway.

The city may also consider legislation next year to require city contractors to pay their employees at least $15 an hour.

The push for a $15 minimum wage among fast-food workers came to Pittsburgh on the same day as the mayor’s announcement. Workers at a McDonald’s restaurant on Stanwix Street downtown went on strike at 6 a.m. as a part of strikes that were planned in 270 cities on Tuesday, according to the Pittsburgh City Paper.

According to the City Paper:

Later in the afternoon, more than 300 supporters joined the fast-food workers and marched through Downtown streets calling for a $15 wage and the right to form a union, an ongoing battle for many service workers.

Democratic presidential candidate Hillary Clinton tweeted her support of the protestors in advance of Tuesday’s strikes.