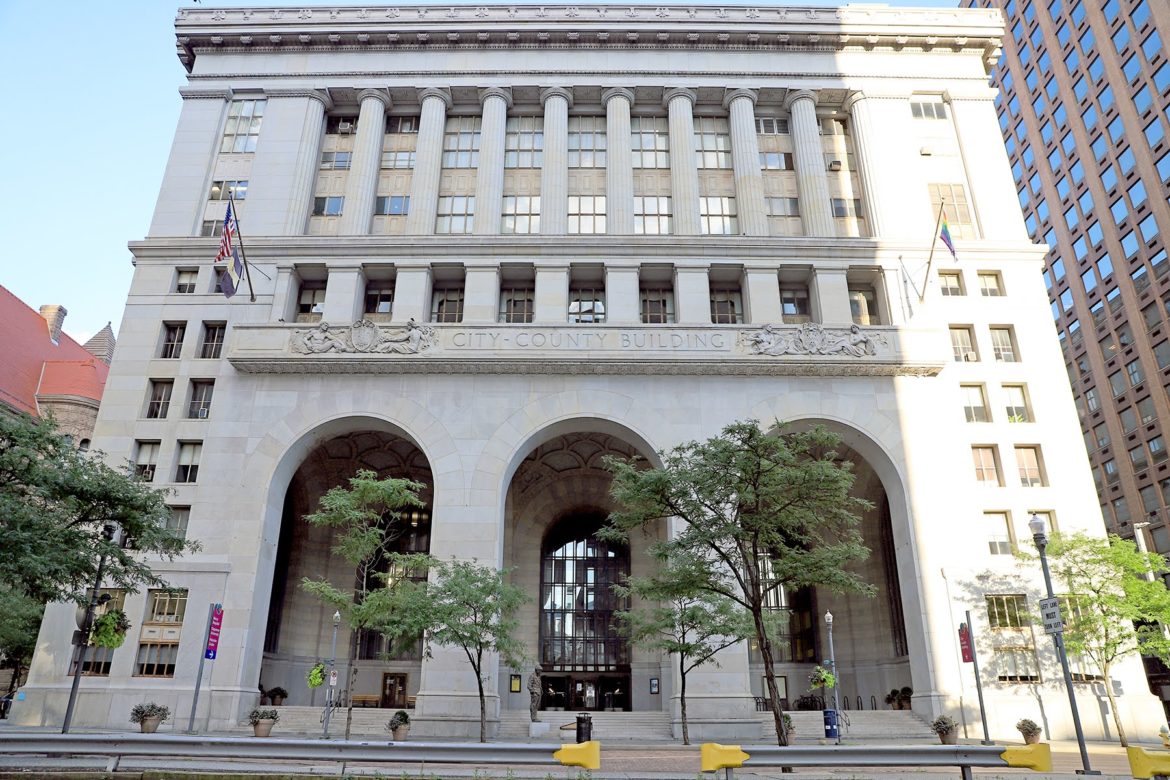 The City-County Building in Pittsburgh. (Photo by Jay Manning/PublicSource)

Pittsburgh City Council extended its COVID-19 sick leave ordinance last month, requiring all employers of 50 or more people in the city to give employees paid time off if they contract COVID-19 or need to care for someone who has. Workers employed by Allegheny County within city limits, though, are receiving no such allowance.

The county ordered all of its employees back to in-person work in July. Internal emails and interviews with multiple employees showed that county employees must use their accrued benefit time to stay home due to a COVID-19 infection, but the law states that employers must offer additional paid leave beyond existing accrued sick leave.

County employees may have less than two weeks of benefit time if they were hired recently or if they used some before becoming infected. The county’s thousands of employees, many of whom worked remotely during the pandemic until July, are now forbidden from working from home, including those with active COVID-19 infections.

Several county employees confirmed that the policy has remained consistent more than six weeks after the return-to-office mandate as the Delta variant has continued to drive case counts up.

Joshua Lamonde, a business compliance specialist in the mayor’s Office of Equity, said the county’s Pittsburgh-based employees should be covered by the ordinance, and they should be afforded up to 80 hours of paid leave if they test positive or meet other criteria outlined in the law. He said he has done outreach to certain county departments, though, and that “there has been confusion” over whether the county as an employer is exempt. There are no exemptions written in the ordinance.

“They are conferring with their legal teams as we speak,” Lamonde said last week when asked how the county views the situation. Lamonde said his talks with county departments were informal outreach, not part of an audit.

County spokesperson Amie Downs did not answer questions about how the county views the city ordinance but said, "Throughout the pandemic, the county has balanced the safety of its employees with the need of county residents to receive ongoing services and support."

She said the county offered 10 days of paid leave for affected employees through July, a benefit that had previously been required by federal law. Downs said the county has made policy adjustments to make accrued leave more flexible for employees to use and encouraged employees to contact supervisors and human resources in order to "navigate those options available to them."

Lamonde said the city can’t proactively force the county — or any other employer — to comply with the ordinance but would react to complaints filed by employees with the Office of Equity.

Multiple county employees told PublicSource they have filed such complaints recently, though Lamonde could not confirm or deny having received any. He said if a complaint is filed, the office would conduct an audit, trying to be “as fair as possible to both the employee and the employer.” After the audit, the office could find an employer noncompliant and begin penalizing them $100 per violation.

City Councilman Bobby Wilson, who sponsored the city’s ordinance, said he’s not aware of any exemption for county employees but would not comment directly on the situation.

“The law clearly says that any employer with 50 or more employees would be required to provide this type of leave,” Wilson said.

Councilwoman Deb Gross criticized the county’s policy, though she said she’d need to review the law further before commenting on its application.

“It’s unfortunate, and the county should reconsider their stance,” Gross said. “We have high community spread in Allegheny County right now. It’s for the public’s benefit that workers are able to take that time off.”

Several county employees told PublicSource they fear the lack of COVID-19 sick leave will incentivize employees to come into crowded workplaces despite showing symptoms or even testing positive.

The dispute comes while Allegheny County Council is considering a new paid sick leave bill proposed by County Executive Rich Fitzgerald that would require employers of 26 or more people to give workers at least one hour of paid sick leave for every 35 hours worked. Fitzgerald vetoed a similar bill in March, citing process concerns at the time.

Pittsburgh City Council passed the COVID-19 sick leave ordinance in December 2020 and extended it in July 2021 for another year.