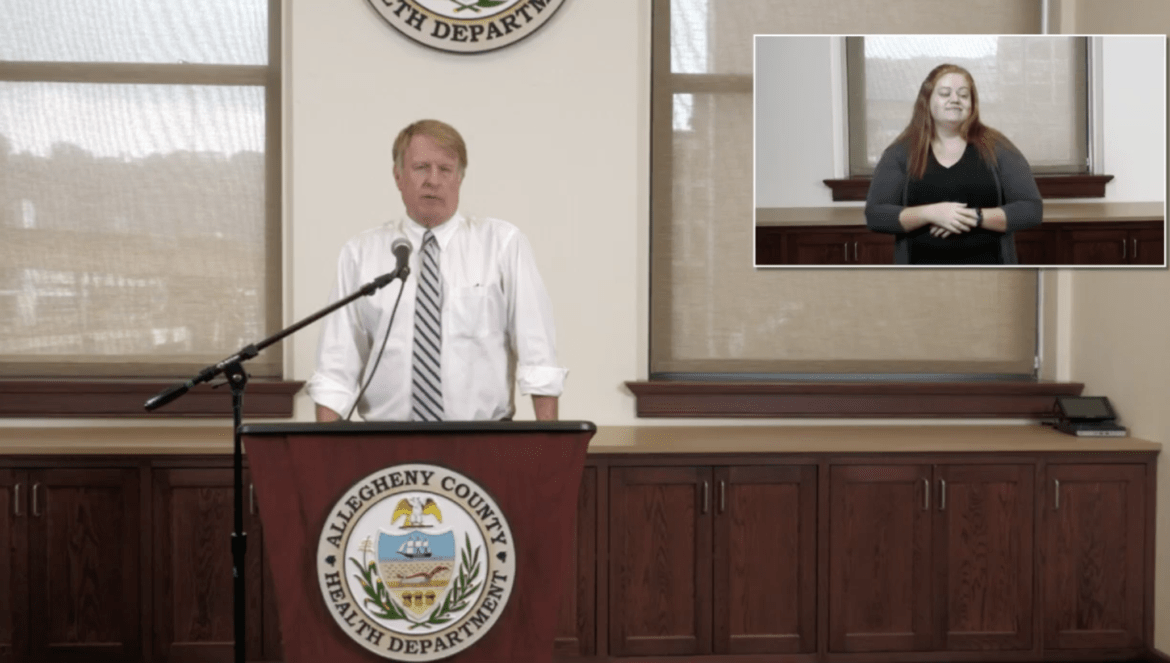 Screenshot of Allegheny County Executive Rich Fitzgerald speaking during a press briefing on COVID-19 on Aug. 4.

Update (8/5/2021): Allegheny County announced on Thursday that new hires would be required to be vaccinated, while existing unvaccinated employees will face a mask mandate and virus testing at least once per week.

After the county ordered all of its workers back to offices in July, employees describe a workplace without mask or vaccine requirements, where people crowd into cubicles as before the pandemic while the Delta variant drives case counts up again. The county moved back into the “substantial” category of transmission Monday, one week after the full return to in-person work.

A July 12 email from County Manager William McKain came as a shock to some: All employees would be required to return to full-time in-person work on July 26. After a year and a half with no concrete return-to-office plan, employees had two weeks to make arrangements such as securing child care.

Nine county employees spoke to PublicSource about the transition back to the office, speaking under the condition of anonymity because they are not authorized to talk to reporters and they feared they could lose their jobs by speaking on the record.

They said while the county vaguely spoke of a return to the office in previous months, the July 12 email was a surprise. The policy was rigid, leaving employees to weigh health risks to themselves and their family members.

County spokesperson Amie Downs told PublicSource last week that employees were told to plan for a return to the office “going back several months” and that most county employees had already returned to in-person work, or had never left. But employees told PublicSource that until the July 12 email, there was no indication the remaining remote workers would return in July. Some said agency leaders gave them the impression it would happen sometime after the start of the school year.

They also sounded alarms over a lack of flexibility for immunocompromised employees and the county’s quarantine policy. According to the employees and internal emails obtained by PublicSource, employees who test positive for COVID-19 or are exposed to somebody with COVID-19 cannot work from home and have to use accrued paid time off to quarantine.

Multiple employees told PublicSource it feels like the county has ceased all COVID mitigation efforts in its offices.

“There is not really a plan,” one employee said. “Their key phrasing is that this is business as usual. The mask is optional, there’s no vaccine requirement.”

An email sent to county employees July 23, detailing new policies. Part of this section was cropped to omit an email address.

Downs wrote in a July 30 email that frequent handwashing and physical distancing is recommended and cleaning protocols remain in place. She did not provide answers by publication time to more specific questions about the concerns raised by employees. The questions also went unanswered in the county’s weekly COVID-19 press conference Wednesday.

People with medical conditions that put them at an increased risk for COVID-19 complications can request a formal ADA accomodation to continue working from home, but the process can take weeks and the county is requiring such people to work in person or use benefit time until approval, the employees said.

“I know a lot of immunocompromised people who are out of benefit time so they have to go into the office and risk dying of COVID,” another employee said.

The employees told PublicSource that their agency leaders made it clear these policies originated solely from county leadership — County Executive Rich Fitzgerald and County Manager McKain.

Fitzgerald in a news conference last week praised President Joe Biden for requiring federal employees to either be vaccinated or take frequent COVID-19 tests. He complimented organizations like the NFL for doing the same and cited vaccines as a key reason he thinks workers can return to offices in the county. But the county’s return-to-office plan includes no testing and no vaccine mandate.

The county’s move back into offices comes with a backdrop of uncertainty over where the pandemic is headed. The Centers for Disease Control and Prevention is urging new vigilance against the Delta variant, saying that it’s far more contagious than previous forms. Case counts are up significantly in Allegheny County and nationwide, and the county was moved back into the ‘substantial’ transmission category on Monday. The CDC last week reinstated some of its masking guidance, saying people in areas with substantial transmission should resume wearing masks in indoor public settings, even if they’re vaccinated.

In his July 12 email about returning to the office, McKain wrote: “I am happy to report that the conditions in the county have greatly improved from those early days of the pandemic, with over 73% of residents at least partially vaccinated and positivity rates continuing to fall.” (As of Aug. 3, CDC data shows that 67% of county residents are at least partially vaccinated.)

The pandemic’s trend has taken a pronounced turn since early July. The county’s positivity rate is no longer continuing to fall: After bottoming out around 1% in June, it’s more than 3% now (it peaked above 10% in late 2020). The county has seen an increased number of cases each week since the start of July.

“With the changing variants,” one employee said, “I’m getting more and more concerned every day about passing it on to my son,” who is too young to be vaccinated.

Another employee said some staff meetings are still held virtually, despite everyone being in the building, because people don’t feel it would be safe to gather in one room.

“With the county executive’s decision to remove all flexibility, a lot of people are questioning whether they want to work here.”

Beyond the immediate safety concerns, employees described a state of confusion and disillusionment with their employer.

“We have been applauded by leadership for what we accomplished at home the last year and a half, and it feels like a slap in the face to say you can’t do this anymore and you have to go back,” one employee said.

Another said there was a sense that the county gave great respect to its workers early in the pandemic, but that has shifted now.

“It’s not that we don’t want to work,” said another employee. “We’ve been doing intense work for a year. We want to do this work where we feel safe.

“With the county executive’s decision to remove all flexibility, a lot of people are questioning whether they want to work here.”