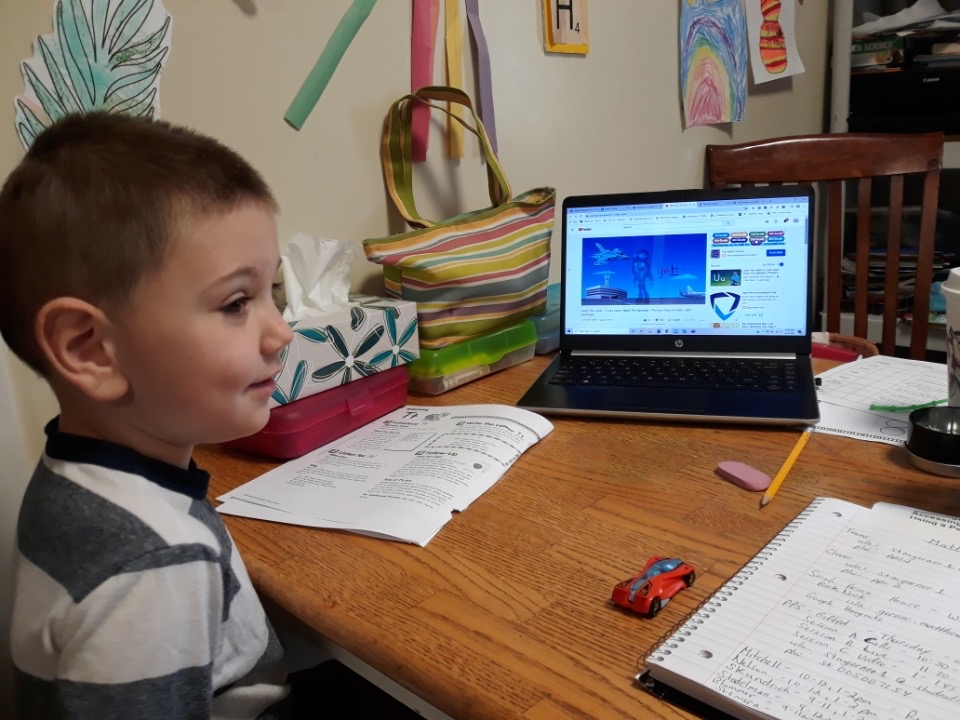 Carol Gerner's son Jacob, 3, at the table where Gerner tried to create a "school atmosphere" in the spring. (Courtesy photo)

The scramble to get Pittsburgh Public students back to learning in the spring led to at least one costly and now locally infamous stopgap.

The printed instructional packets distributed to students and described by several parents as "a complete failure" and "just a mess" cost the district more than $1 million to print and assemble.

The district printed 60,000-plus instructional packets as it attempted to quickly move its 23,000 students online in the wake of the COVID-19 pandemic. They were to serve as a needed resource to continue learning for all students, especially those without access to technology or the internet, but the packets drew swift criticism from families for being inconsistent, dense and illegible at points.

When Melanie Tedesco, mother to three students in the district, reflects on the instructional packets, she sighs. Then, she rattles off a list of reasons to explain why she thought “they were terrible.” Tedesco wasn’t alone in this thought. She spoke to at least eight other families and said, “I don’t know any family that ended up liking them at all.” 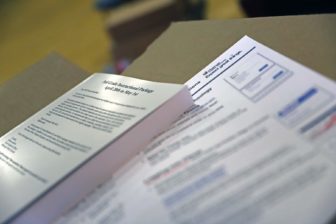 School work packets for distribution at Pittsburgh Obama 6-12 during the COVID-19 shutdown. (Photo by Jay Manning/PublicSource)

The instructional packets from the spring illustrate the tip of the iceberg in unprecedented, increased spending districts statewide will face in the months and possibly years to come as they grapple with the best solutions to keep students learning and families and staff safe.

School funding experts predict a massive blow to public school district budgets as a result of the economic downturn caused by the pandemic. At the same time schools will compete against legislative budget priorities such as emergency public health, they also face increased costs including access to technology and costs related to students’ social and emotional needs.

Pittsburgh Public Schools [PPS] is estimated to experience between a $9 million and $10 million reduction in local revenue in the 2020-21 year, by the PA Association of School Business Officials [PASBO].

Though we can’t fully grasp it in this challenging and messy moment, this is “probably a really pivotal moment in public education,” said Assistant Executive Director Hannah Barrick of PASBO.

Barrick said “there’s a lot of opportunities on the other side” of the pandemic “to kind of redefine and rethink” how schools should look and function to be “adaptable and flexible.” She said the challenging situation highlights significant issues for school systems and hopes this moment will lead to those issues being addressed.

Barrick said many districts had to “be really innovative and creative” when the pandemic struck.

Each district faced unique spending based on their specific student populations and reopening plans, but many have begun to spend money on immediate and unforeseen needs, including device technology, protective equipment, disinfectant and cleaning supplies and additional staff.

Despite the unparalleled challenges, many parents felt the packets fell short of its obligation to give students high-quality education.

Shortly after PPS closed in mid-March, district leaders sought to find a way to continue learning for its students, both with and without technology. The district began remote instruction on April 22.

For students without technology or access to the internet, they turned to paper instructional packets as a solution. By July, the school board approved more than $1 million to print and assemble packets. From March 16 to May 15, the district spent $624,473.72 on 63,500 packets. The school board approved an additional $469,318 at the July legislative meeting to pay for the cost of printing and assembling packets.

Ebony Pugh, the district’s spokeswoman, wrote in an email that the spending “was unprecedented and in direct response to the sudden shut down of schools due to COVID-19.”

Carol Gerner stood in her Brighton Heights home a few days after PPS shut its doors in March, searching for a way to create a “school atmosphere” at her tables. She hoped to keep her two sons, ages 3 and 8, engaged in their schoolwork. She swiftly realized the problems stretched beyond the atmosphere.

For her two sons at Allegheny PreK-5, the packets “were a complete failure.” 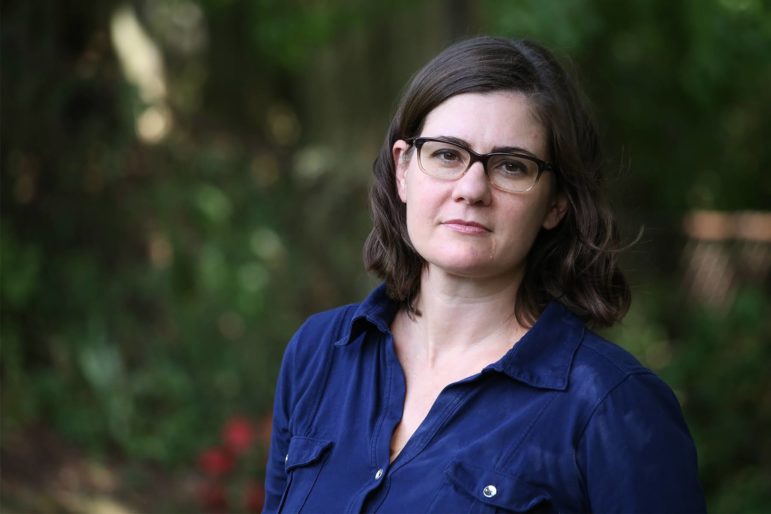 Jody Handley, photographed outside her home in Squirrel Hill on August 17, 2020. (Photo by Ryan Loew/PublicSource)

“The district kind of fumbled the ball and just kind of hurried up and got something together because they don’t have the resources to get everybody a computer,” she said. Packets didn’t get submitted for grades. Pages didn’t align with computer assignments. Other pages were fuzzy or unreadable. Some lacked clear instructions.

It was “just a complete mess,” she said.

As a public school supporter, Jody Handley knows the district faces a myriad of new challenges and that shifting a district to virtual learning in the spring was “a huge undertaking.”

She even understands the choice for packets was “because they were just unprepared … to create an equitable distribution of learning materials, like they really didn't have a lot of options with such a short amount of time.”

Still, Handley said for her and her two daughters who attend schools in the district, the spring experience “was so stressful.”

Handley said her home has the makings of a successful virtual learning experience: devices and internet access for each child, reliable transportation, a printer and she works from home most of the year, so she’s able to be hands-on with their studies.

“We should have had the easiest approach to this,” Handley said, “and it was still frustrating.”

She worried about families with fewer or no resources.

Throughout the spring, Tedesco delivered packets to eight families who couldn’t go themselves and, “we all agreed that none of us liked it.”

They experienced similar difficulties. One family gave up on packets completely, the mother telling Tedesco that her child wasn’t “learning anything in any way.”

Another mother Tedesco dropped off packets to worked full-time and wasn’t able to help her kids work through their packets until she returned home from work at night. “And at that point, the boys were like, ‘We don’t want to do this,’ because they were out of their routine,” she said.

Beyond the physical packet challenges, Tedesco said, “unless you went in to your Microsoft Teams and actually did a live meeting with one of your teachers, there was no explaining how to do things,” which left her children confused on many assignments.

Teachers helped when they could, she said, but at a point, “we were all kinda like working with each other, trying to figure things out because none of us really knew.”

Experts who spoke with PublicSource said the district’s spending on packets is in line with the many schools who had to find creative ways to provide for all students, especially the most marginalized and under-resourced.

Districts “without resources were the ones furthest behind,” when the pandemic struck, “so they had the largest expenditures to try and catch up, because they had no choice,” said Jay Himes, leadership adviser at PASBO. Until 2019, Himes spent 23 years as PASBO’s executive director.

“The technology field is one in which people had to scramble to try and get up to speed in a big hurry because of the dilemma of their school finance picture…” Himes went on, “It was a massive scramble.”

For schools, this unique moment is “fraught with big, big question marks,” with answers that will only come in time, Himes said. We won’t know the immediate effects, he said for example, of transportation costs or the growth of tuition payments. 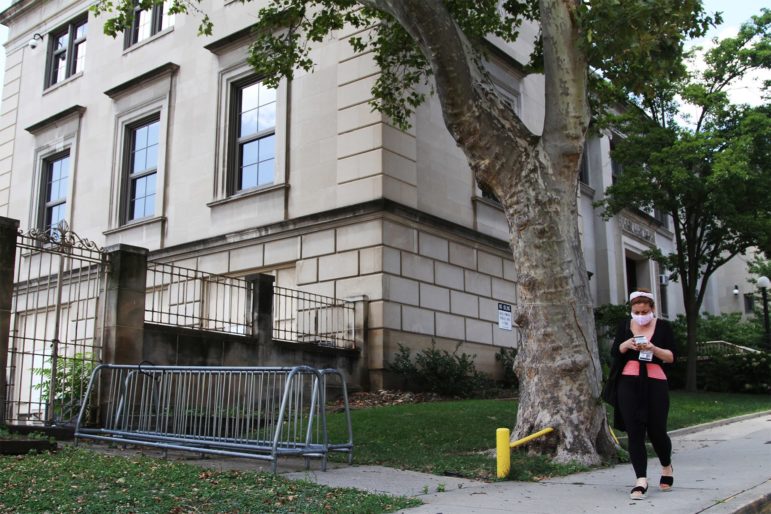 A person walks past the Pittsburgh Science and Technology Academy in Oakland. (Photo by Ryan Loew/PublicSource)

Contributing to financial uncertainty and strain, school districts “have no relief on charter tuition costs and special education required services, and those mandated costs will continue to increase regardless of the economic downturn,” according to PASBO.

Past crises have often shaped and reshaped school systems. Himes said PASBO looked to the Great Recession as a North Star or guide, “for what happens to school budgets when you have a national economic calamity.”

“The difference, when we did look at it,” Himes said, “the Great Recession was sort of this slow and dreadful pain over a period of time. [COVID-19] was everything all at once. But we knew the effects would be the same,” including the effect wages and unemployment would have on property taxes.

Federal funds this year, “help us out significantly and maybe make up for any losses in either property taxes or income taxes as a result of the economic situation, and make up for any of the additional expenses they may have” Himes said.  “But when the plug gets pulled on the federal dollars and we have a continued decline in our local revenues, we have a big hole to fill for the next budget.”