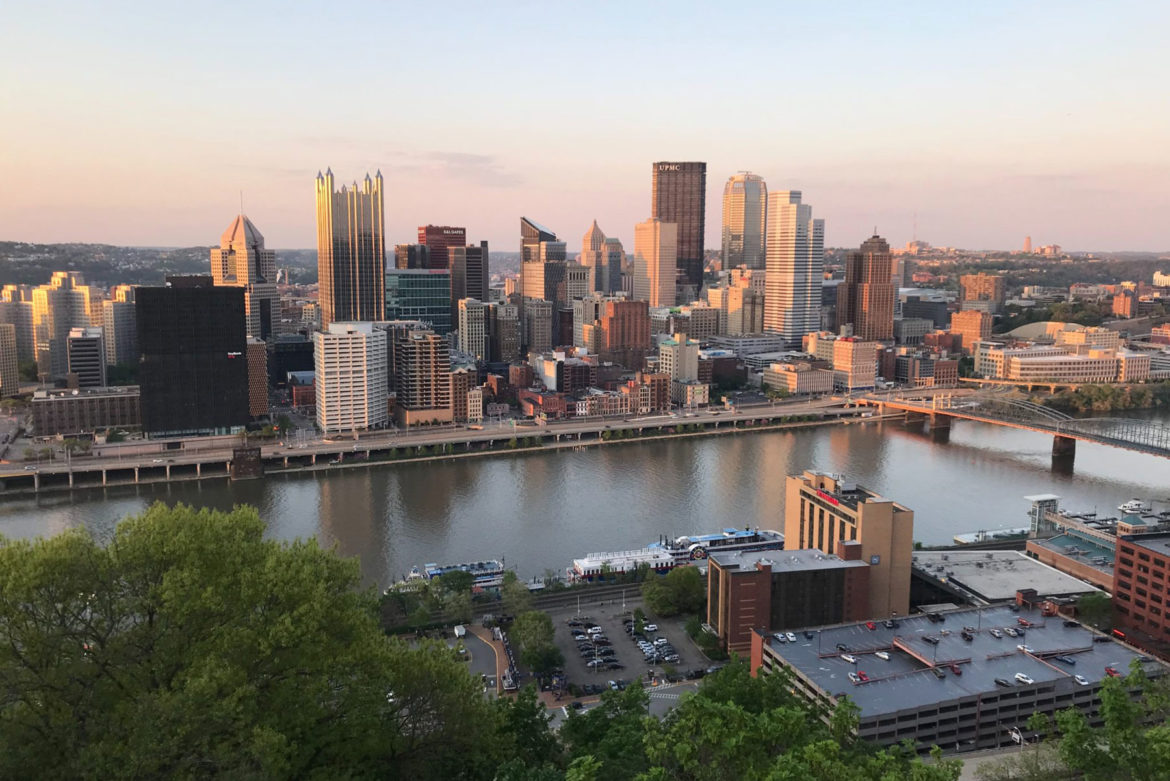 The federal Paycheck Protection Program [PPP] awarded more than $1.5 billion to 10,675 small businesses and nonprofits in the Pittsburgh area during the spring and summer, according to data released in December by the Small Business Administration.

But the size of the loans was based on 2019 payroll data and the program was not designed to evaluate which businesses were most in need — potentially exacerbating some of the local economy’s existing inequalities.

This money supported at least 125,000 jobs at businesses with Pittsburgh mailing addresses, which includes several nearby suburbs. But the actual number of jobs supported could be significantly higher because a quarter of the companies didn’t report their job totals. There were just under 300,000 jobs in the city of Pittsburgh in 2019, according to census data.

To dive into the data and see who received a PPP loan near you, click here to check out our data page.

RYCON Construction Inc., a construction company, and Sargent Electric Company, an electrical contractor, were the only two local companies to receive the maximum loan amount of $10 million. Sargent’s projects were shut down during the pandemic, according to an emailed statement from its president, Rob Smith, though he said non-disclosure agreements prevented him from going into more detail.

“The PPP program allowed companies such as Sargent to be ready to support our customers as they gradually recovered their ability to continue their projects,” Smith wrote. “Today, we have some significant programs that are still delayed due to our customers’ economic situation, though most of our projects have resumed and are proceeding.”

The third-largest recipient was TeleTracking Technologies Inc., a healthcare IT company that was embroiled in controversy over the Trump administration’s decision to pay it $10 million to track national COVID-19 hospital data instead of tracking it through the Centers for Disease Control and Prevention. TeleTracking received $9.7 million in PPP funds. TeleTracking didn’t respond to an interview request. 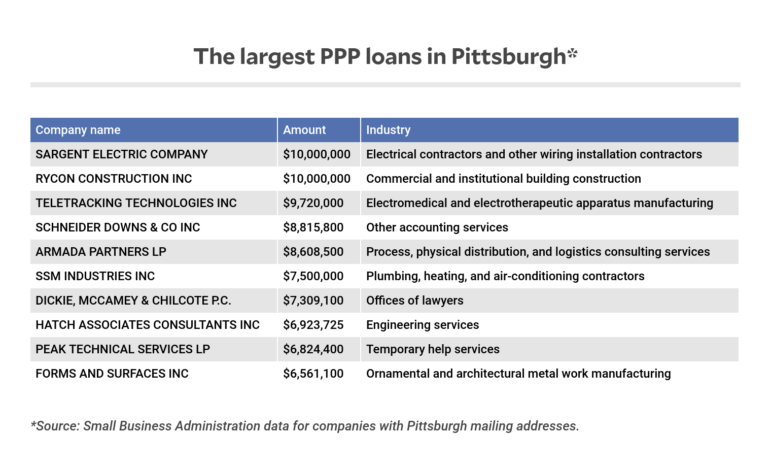 Although the majority of companies didn’t list the demographics of their ownership, those that did showed businesses owned by white men benefited most from the PPP. Of the nearly 2,000 businesses that listed an owner’s gender, four times as many were owned by men than by women.

And of those that listed a race, 22 times more businesses listed white ownership than Black ownership. There were around 25,000 businesses counted in the city of Pittsburgh in a 2012 census estimate, but as of 2018 only 380 businesses had been certified as a minority or female-owned business in all of Allegheny County.

PPP loans were given out based on 2019 salary data, so the new data also sheds light on the payrolls of thousands of privately held city businesses that otherwise aren’t required to publicly share their payroll data. Financial analysts can estimate the size of the largest privately held companies.

But the majority of the small and medium-sized businesses who received PPP loans are not required to publish financial statements and only privately send tax information to the Internal Revenue Service. So the PPP loans are the first widely shared financial information about private businesses in the country.

Brian Webster, a senior manager at the accounting firm Schneider Downs & Co. Inc., said that, even though many of these private businesses are used to keeping their financial information private, his company was aware that freedom of information laws would make information on the loans public, and it advised clients accordingly.

Schneider Downs received more than $8.8 million in PPP loans, the fourth highest in the area, but didn’t respond to a request for comment on its own loan. Webster said that “Anecdotally, most companies probably did take the maximum that was permitted based on their own calculation.” 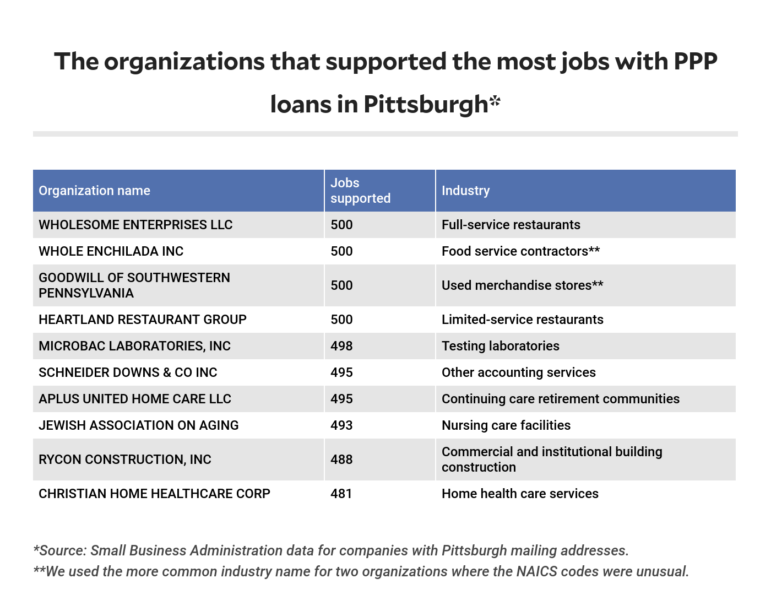 As Congress continues to discuss a new bailout, the leading bipartisan proposal includes nearly $300 billion in additional PPP money. But the data from the first round of PPP also shows that many of the businesses that suffered most during the pandemic, didn’t benefit the most as Congress rushed to get money into the economy.

David Rohm, a co-owner of Wild Excellence Films with his wife, received the third smallest PPP loan with a Pittsburgh address, just $475. He says small businesses like his could use a more targeted approach to get through the continued economic downturn.

“Can we just get a little bit to get us through this?” he said. “Because everyone knows damn well we are not through this economically, not even close.” 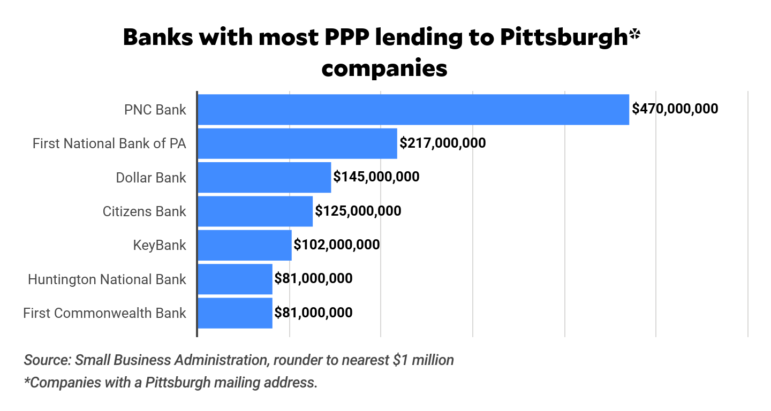 The data released by the Small Business Administration on Dec. 1 revealed exactly how much each business received across the country. Previously, the agency only shared a range of how much companies received above $150,000. The program issued more than 5 million loans, totaling $525 billion across the country.

PublicSource* pulled the PPP data for any business that listed “Pennsylvania” as its state and  “Pittsburgh” as its city, including 23 different spellings, such as “pgh” and “Pittsburg.” The largest disbursement in Pittsburgh was $10 million and the smallest was $100.

Law offices in Pittsburgh received more than $80 million, the largest payout of any industry locally. Dickie, McCamey and Chilcote received $7.3 million, the most of any law firm with a PIttsburgh mailing address.

“The legal industry is not immune to the significant impact of the shutdown of non-essential businesses,” said Jeffrey T. Wiley, managing director and chief operating officer of Dickie, McCamey and Chilcot, in a statement emailed to PublicSource. “Despite court closures and a downturn in business, we have avoided lay-offs and other measures and as a result have maintained our pre-COVID level of employment, for which all of us here at Dickie McCamey are grateful.”

Restaurants, which have suffered from shutdown orders and regulations limiting capacity for far longer than many businesses, received more than $60 million, the second most of any industry. The company that runs Dunkin’ Donuts in Pittsburgh, the Heartland Restaurant Group, received more than $3.5 million. Heartland didn’t respond to an interview request.

The company that runs Five Guys and Choolah in the Pittsburgh area, Wholesome Enterprises LLC, received $1.7 million, the most of any “full service” restaurant company. The email listed as the contact information on Wholesome’s website didn’t work.

Whole Enchilada Inc., which runs under the name Big Burrito Restaurant Group and operates the Mad Max restaurant chain and six other restaurants, received $5.6 million but it’s industry was listed as “Professional, Scientific, and Technical Services.” A representative for Big Burrito passed on the email address of its president, Bill Fuller, who didn’t respond.

Large fast food chains that received the funds were criticized for taking funds that were intended to go to small businesses. Shake Shack returned its $10 million award after the controversy. But many individual and regional franchise owners across the country accepted the funds.

The PPP data also underscores the narrative that technology and medical sectors are driving the local economy. The two sectors that received the most PPP funds were the “Professional, Scientific and Technical Services” and “Health Care and Social Assistance” sectors, which together made up more than a third of the total PPP funds distributed.

The largest educational organizations in the city, such as Pittsburgh Public Schools and most of its universities, have more than 500 employees and were not eligible for the PPP program, though they received other COVID-19 assistance. And the largest medical providers, like UPMC and Allegheny Health Network, received COVID assistance through a different CARES Act program. 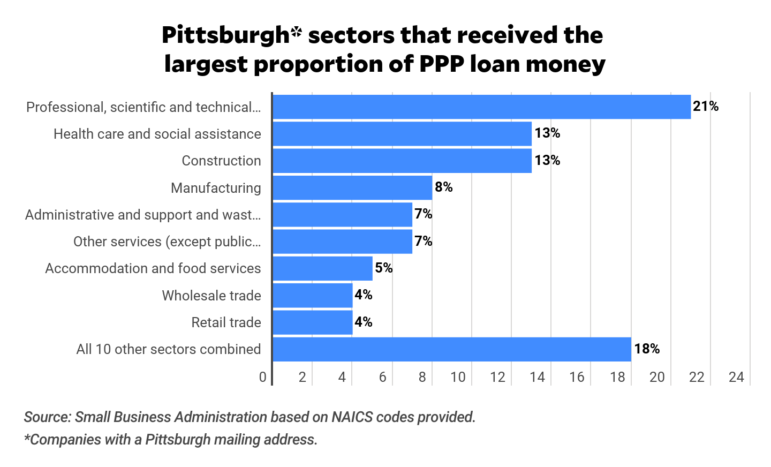 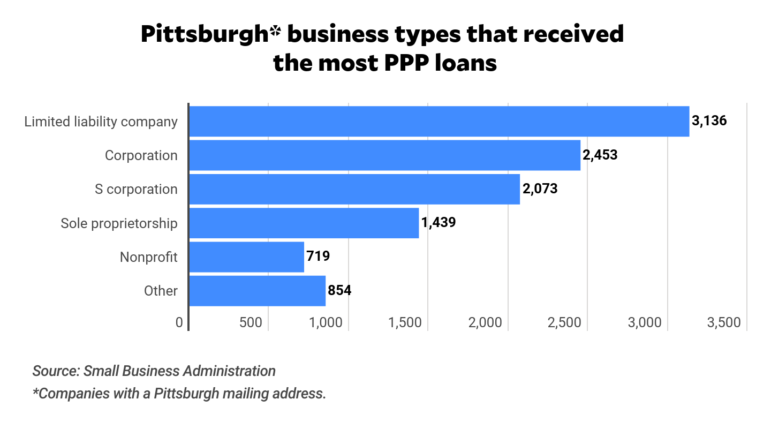 More than 70% of the organizations that received funding didn’t have an obligation to report its payroll information, including limited liability companies, S corporations, sole proprietorships, partnerships, limited liability partnerships and some contractors and self-employed individuals.

The amount of their PPP loans, however, can be used to estimate 2019 payroll for these companies. For example, Living Independence for the Elderly Pittsburgh received $4.7 million in PPP funds, the largest payout for any nonprofit in the city. That money represented almost exactly 2.5 months worth of the salary and compensation that the nonprofit reported publicly for 2019.

In theory, he should’ve received $2,475 in PPP loans, but $2,000 first went to pay off part of an advance he received from another government loan: $10,000 in Economic Injury Disaster Loans [EIDL], a low-interest, 30-year loan that has to be paid back. He used the EIDL money to pay off camera equipment he’d purchased on company credit cards.

He tried to get his PPP loan amount increased, he said, but “that’s a fight I’m not going to win.”

Each business has to fill out a form in order to have their PPP loan forgiven. On Tuesday morning this week Rohm’s bank told him by email that his initial PPP loan calculation was off, and he would have to repay the $475, according to the program’s formula, which he didn’t fully understand.

“Your guess is as good as mine,” he wrote in an email. “But we got a fair deal, it’s just confusing.”