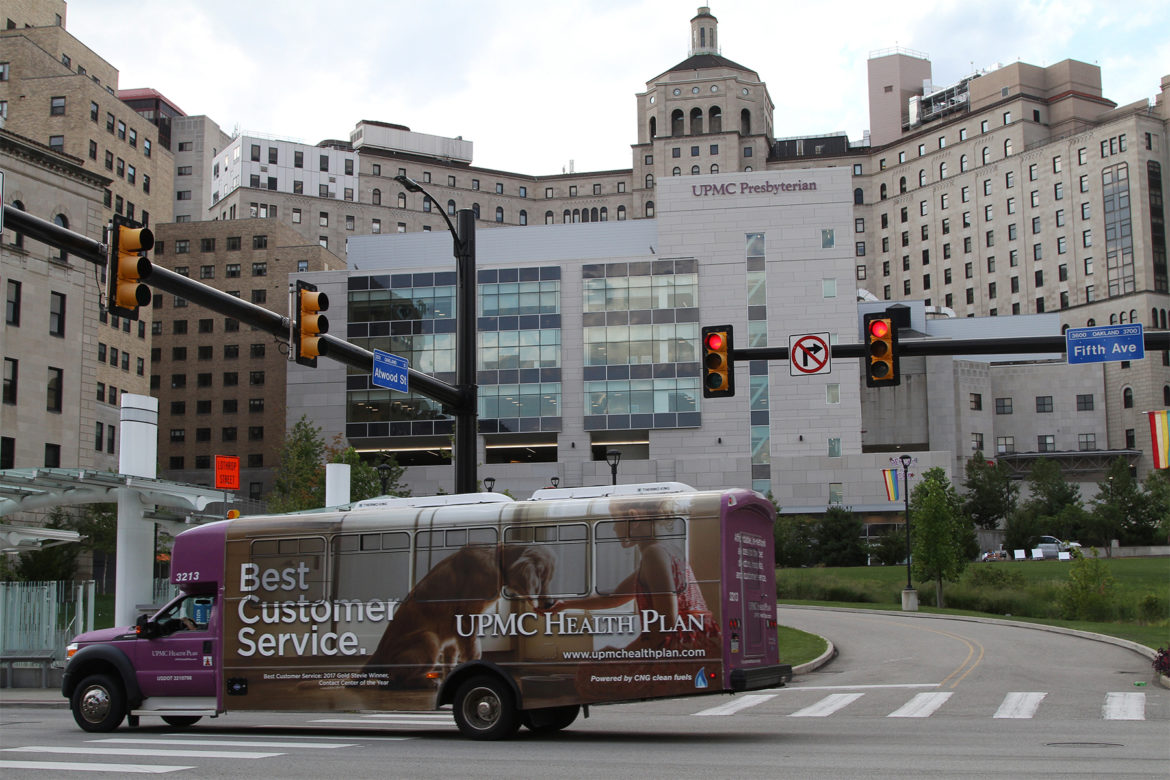 UPMC Presbyterian Shadyside received the most federal aid of any location in the UPMC system. (Photo by Ryan Loew/PublicSource)

UPMC, the largest healthcare provider in the Pittsburgh region, says it lost $150 million in patient revenue in the final two weeks of March before receiving one of the country’s largest COVID-19 aid packages.

Patient volumes dropped “in response to directives from various elected officials to attempt to quell the spread of the disease,” the healthcare giant reported in its most recent quarterly report on May 29.

To blunt the impact of COVID-19 on healthcare providers, the federal government awarded Pittsburgh’s largest employer more than $1.1 billion in grants and loans. UPMC was one of only 25 organizations nationwide to receive more than $1 billion in aid. The aid included $363 million in grant money from the Provider Relief Fund and nearly $800 million in loans that UPMC will have to pay back by the end of next year.

But some critics say that the money was awarded in accordance with a formula favoring  providers that least needed the aid. They say the money should’ve been prioritizing facilities that would struggle to stay open without help and providers serving residents most likely to be impacted by the pandemic.

The federal government awarded the money to healthcare organizations across the country based on how much money each had generated from Medicare patients, in particular, and in part based on their revenue from all sources in 2018. The aid worked out to about $130,000 per hospital bed in the UPMC system and about 5% of their operating revenue last year.

This aid package UPMC received was one of the largest of any business or nonprofit, in any industry. Across the country, 25 healthcare providers received more direct grant funding, and about half of those were in New York and New Jersey, which were the hardest hit by COVID-19 early on, and some of which were eligible for additional funding. Most of the others were national providers with locations spanning between six and 22 states.

Only nine non-healthcare organizations received more grant funding than UPMC, including a handful of the country’s largest airlines, airports and universities. The funding for these loans and grants came from different programs in the CARES Act and the funding for the loans for healthcare providers came from a program that is normally used to provide advanced payment to disaster victims from the Centers for Medicare & Medicaid Services.

Neil Mahoney, a professor of economics at Stanford University who studies health care, said that healthcare funding hasn’t received the same level of scrutiny as funding for unemployment, for example. “This is money that goes to these large institutions, and the dollar value is huge so I do think it’s important that [we’re] paying attention to this,” he said.

Initially, Congress required recipients of this healthcare aid to report how it spent this money quarterly, but the U.S. Department of Health and Human Services has since said the recipients don’t have to report how they spent the money until February. On Aug. 27, UPMC will release financial information about how the company was able to weather the downturn between April 1 and June 30. A spokesperson didn’t answer a question about whether it will explain in detail how it’s spent the more than $1.1 billion in federal funding.

If UPMC’s finances are like other local providers, next week’s financial statement could have some bad news. The Allegheny Health Network, the second largest provider in the region, has already reported losing $116 million the first six months of the year due to lost revenue from COVID-19.

UPMC did not make anyone available for an interview for this article. Susan Manko, the vice president of public relations for UPMC, responded by email to a list of 15 questions about UPMC’s finances by referring to its quarterly report released in May. Manko responded to only one of those questions directly, an inquiry about whether UPMC had instituted any layoffs, cutbacks or adjusted executive pay.

“UPMC did not and does not plan to institute any pay cuts, furloughs or staffing reductions related to COVID-19,” Manko wrote. “Flexible work arrangements and alternate assignments have been put in place where possible.”

Why did UPMC receive so much aid?

The federal government has allocated $175 billion in grants to help healthcare providers and has already spent more than $100 billion of it.

In the past couple of years, UPMC providers received nearly two-thirds of their revenue from the government-run healthcare programs, Medicare and Medicaid.

An analysis by the Kaiser Health Foundation showed that the initial formula used to distribute the aid meant hospitals with the highest rates of private insurance revenue, actually received more funding. At UPMC that means the largest share of grant money went to UPMC Presbyterian, UPMC Mercy and UPMC Pinnacle in central Pennsylvania.

Although the money was broadly intended to go toward COVID-19 efforts, it’s not clear how it was distributed. Allison Hydzik, a spokesperson for UPMC, said the hospital chain has 750 ICU beds and could potentially double that amount if needed. UPMC has conducted over 146,000 COVID-19 tests, including 7,300 positive tests, Hydzik wrote in an email. She said UPMC has served those patients who tested positive directly in person or through outpatient video visits, but she didn’t have data on the total number of COVID-19 patients UPMC has served in its hospitals.

Did it need the money?

Mahoney, the economist at Stanford, said that large hospital systems like UPMC didn’t really need the government funding to withstand the pandemic because they have so much money already. UPMC touted in a May press release that its “$7 billion cash and investments provide for long-term sustainability.”

But according to some federal officials at the time, organizations like UPMC were in danger because they were delaying so many non-essential procedures.

“Healthcare providers are making massive financial sacrifices to care for the influx of coronavirus patients,” said Seema Verma, the administrator of the Centers for Medicare and Medicaid Services, when the loan funds were distributed in April. “They shouldn’t be penalized for doing the right thing. Amid a public health storm of unprecedented fury, these payments are helping providers and suppliers — so critical to defeating this terrible virus — stay afloat.”

In addition to its own financial reserves, UPMC was able to draw on more than $2.3 billion in private financing to help its cash flow during the pandemic, according to its most recent financial statements.

“The private lenders are not going to lend to somebody who is going to go under,” Mahoney said. “So the fact that [UMPC] can get a large amount of funding on the private market means they aren’t at any serious risk of closure.”

Encompass Health Corporation, by contrast, which operates facilities in 37 states, returned the $237 million it received from the CARES Act because its CEO said it had enough private funding and sources of capital, and it was worried about the requirements that might come with the funds.

Mahoney thinks that the federal money should be focused on helping healthcare providers most at risk of going under. In its most recent disbursements, the government spent more than $11 billion on rural facilities, which is a step in the right direction, he said.

UPMC has another reason it may not be as severely impacted as other providers: It sells health insurance to nearly 4 million people, and health insurance providers have been posting record profits during the pandemic. That’s because many of the patients’ insurers thought they would have to pay claims for never showing up for the procedures. UPMC said it wouldn’t release its data until next week.

Highmark Health, for example, reported more than $600 million in profits for the first half of 2020, so much money that it legally is required to send back more than $100 million of it to customers. The Allegheny Health Network received around $300 million in grants and loans through CARES Act and Centers for Medicare and Medicaid programs.

During the first three months of the year, UPMC reported that its insurance profits had actually gone down compared to last year because it was paying out more money in claims than usual. That report, however, only included two weeks of post-lockdown life.

UPMC has also received funding for a number of research trials and is developing a couple of potential vaccines that could prove lucrative if they work out. One of UPMC’s vaccines in development has had some initial success producing antibodies, but it isn’t one of the vaccines that the federal government has already paid billions of dollars in advance for supplies.

UPMC has been preparing for the possibility of losses. “The final cumulative impact of COVID-19 is not known and will most likely be material to UPMC,” UPMC wrote in its last quarterly statement.

Marshall Chin, a professor of healthcare ethics at the University of Chicago, said the initial Provider Relief Fund payments were lacking for another reason: It didn’t require the fund to prioritize groups that are most impacted by the virus, including racial and ethnic minorities, people in poverty and the elderly in nursing homes. He wants to know whether UPMC and other healthcare organizations have prioritized those groups in the money they received.

Since then, he noted some money has been set aside for providers that target vulnerable residents. In the second round of funding, $15 billion was targeted to organizations that serve low-income residents and uninsured children.

Chin thinks any additional funding should address the underlying systemic issues driving COVID-19 inequities, to change the incentives for UPMC and others. He says providers need to more fully address the holistic needs of vulnerable patients, such as their housing and nutritional needs. Even nonprofits like UPMC are not doing this enough now, he said.

“They have to maintain financial solvency and are playing by the rules that are set up and the current financing mechanisms and what they incentivize,” he said. “And as a whole, they largely incentivize medical care that doesn’t address the social factors that impact patients.”