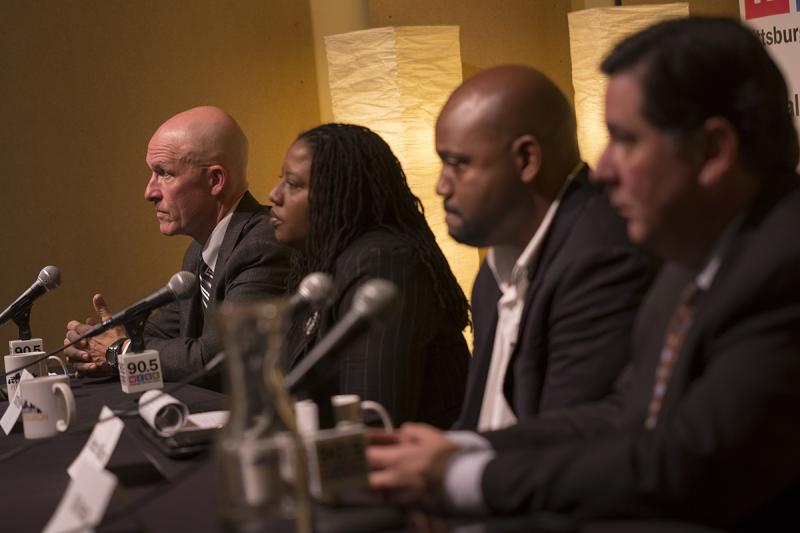 Examples of tension between Pittsburgh police and the city’s black community weren’t hard to find Wednesday at a community forum with Mayor Bill Peduto and Acting Police Chief Cameron McLay.

Leon Ford Jr., a Pittsburgh man paralyzed by police in a November 2012 traffic stop, sat in his wheelchair in the front row at WESA’s community center. His father asked why there had been no accountability for his son’s injury and prosecution.

“We still have the police officers on the force that put my son in his wheelchair,” Leon Ford Sr. said in the forum broadcast by 90.5 WESA, a PublicSource partner.

Peduto said he couldn’t speak to the details of the case but vowed internal reform.

“I can’t imagine what it’s like,” the mayor said, adding that he thinks about the case often.

Ford, who is paralyzed from the waist down, was shot several times after struggling with police, who were concerned that he was lying about his identity and carrying a gun. He was unarmed.

Ford was then prosecuted for assault and trying to flee the scene. A jury found him not guilty in September of the most serious charges, but was deadlocked on the other charges. A judge this week refused to acquit Ford of the remaining charges.

Brandi Fisher from the Alliance for Police Accountability said the case shows why the public trust of police is so low.

“There definitely is a lack of trust,” Fisher said to start the forum. “We’ve had several cases that have shown and proven people being beaten, brutalized and shot with zero accountability.”

Fisher said that while police leadership can’t control individuals, they can control their response to the behavior.

McLay, who took his post as acting chief in September, said he is working to fix breakdowns in “the integrity of leadership” within the Bureau of Police.

The acting chief, who was previously a captain in Madison, Wisc., said that the department has a large number of good officers, but needs to rebuild its relationship with minority communities.

“We exist to reduce crime, fear and disorder,” McLay said.

Training will be the key, McLay said, to making sure officers act properly in contentious situations with the public. Former police officers Sheldon Williams, who also was part of the  forum, said training is crucial, though some officers lack basic proficiency in skills like firing their weapons.

The bureau has been criticized for not disciplining officers for internal political reasons, and, even when problem officers are fired, they can be reinstated through an arbitration process.

McLay said that both rank-and-file officers and leadership in the Fraternal Order of Police are anxious for positive change – something he is heartened, but surprised to hear.

McLay said that he is making it clear to the rank and file that they must treat members of the community with respect, not aggression.