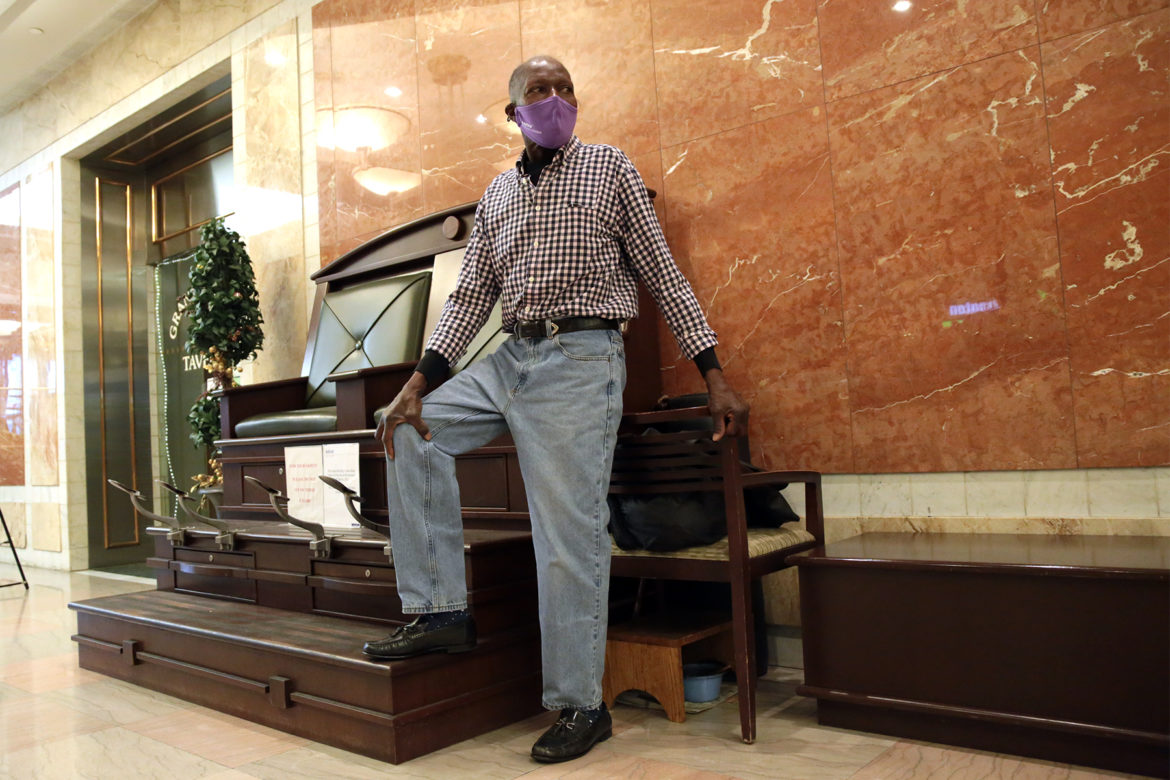 Arnie Newsome, 67, stands at his shoeshine station in the Grant Building. He is one of the few shoeshiners remaining Downtown. (Photo by Ryan Loew/PublicSource)

I remember the day in late May when my neighbor Arnie went Downtown for the first time since the pandemic hit the U.S. in March. “It’s a ghost town,” he said.

For the past 27 years, Arnie has operated a shoeshine station in the Grant Building in Downtown Pittsburgh.

“All of my customers are working from home. The shops where I get my supplies are closed,” he said. “ I don’t know what I’m going to do.”

Arnie Newsome, 67, is one of the few shoeshiners remaining Downtown. Even before the pandemic, this was an industry on its way out, but his business remained steady. Over nearly three decades, he built his success from the sole up. Judges, lawyers and executives in Pittsburgh flocked to his stand for a shine.

“On a typical day, I’d go in, open up a chest the size of a coffin where I kept storage, and it would be filled with shoes that people left for me, even before I got myself set up and had anybody on the stand,” he said. “Other times, people would follow me in on the street. They’d say, ‘Arnie, are you going to work? I’m following you!’

After his May visit Downtown, he thought about throwing in the towel. Until the calls started coming in. “I got calls from my customers saying ‘Arnie, you can’t leave!’” This was a difficult decision to make. “I’ve had too many hospital stays to take unnecessary risks. Under the circumstances, I’d rather just be safe at home.”

“It is such a beautiful experience. To hear, over the years, people talk about their loves, their losses, their pains, their successes ... and I’m just there doing what I do.”

While Arnie doesn’t see a return to his Downtown stand anytime soon, he decided not to call it quits just yet. Instead, he said that his stand is “closed until further notice.” The phrase was full of grief but tinged with hope. “It feels good to know that I can go back when things are safe again.”

While talking to him about the loss of his business, it became clear that his customers come to him for more than just a shoeshine.

Arnie and I live next door in a historic building on the North Side. We got through the toughest days of the pandemic together. We’d meet on his stoop for a (socially distant) daily chat — sometimes with coffee, other times with a cocktail — to exchange stories, worries about the world and reminders of things that make us thankful.

More than once, he said to me: “You’re the only human I’ve seen today!”

Aside from my boyfriend, whom I live with, Arnie was often the only other person I’d see, too. It made me think about how difficult this time was for him. For the past 27 years, Arnie’s shoeshine station served as a social center, a constant turnstile of customers wanting to break up their day with a seat in his chair.

But what struck me most about his relationships with his customers is just how much they appreciate him, and he them.

Arnie said one of his customers brought his son to get his shoes shined on his first day of law school. “I’ve been shining his shoes ever since,” he said. “The father and his son.”

Over the years, he has gotten to know a lot about his customers and has even met many of their kids. “They come in one day and they are in their father or mother’s arms, and the next thing you know, they’re up to my waist.” he said. “They call me Mr. Arnie.”

Arnie is skilled at his craft, but he is also a natural conversationalist. He likes being around people and brightening their day with a shine.

“It is such a beautiful experience,” he said. “To hear, over the years, people talk about their loves, their losses, their pains, their successes...and I’m just there doing what I do.”

At 21, he graduated from the University of Pittsburgh and enlisted in the Air Force Reserves. He served as an aeromedical evacuation technician and continued working his civilian job at the university as the executive secretary for the Department of International Affairs.

“I served for eight years, nine months and six days,” he said.

When he got laid off from the university, he decided to move to Florida, a place he visited often during his time in the Air Force. In 1980, he was working on a high-rise construction site in Orlando. He liked the work, but it didn’t work for him: Arnie was only in his 30s when he developed severe arthritis.

“I was doing a construction job for a bank building, and I saw shoeshine chairs in the lobby. It looked like a king’s throne, and I said to myself, I should do something like that. Then I won’t be hurting myself all day.” 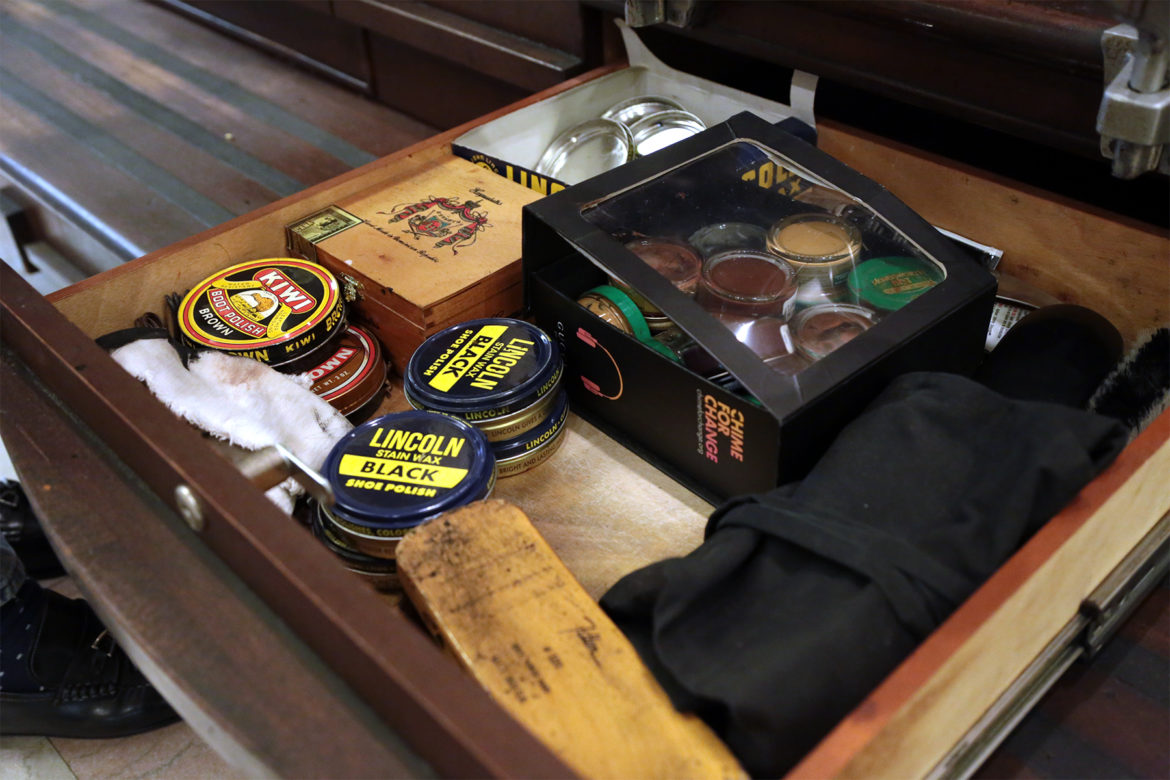 Supplies in a drawer at Arnie Newsome's shoeshine station in the Grant Building in Downtown Pittsburgh. (Photo by Ryan Loew/PublicSource)

Before he knew it, he had two days of training and a steady gig at a car wash. He picked up extra work shining shoes at country clubs on the weekends, and he even had a stand in a dance club.

“I was shining shoes 12 hours a day, seven days a week,” he said. “I wasn’t doing anything else. I was single and living in a trailer park with two dogs.”

For Arnie, the independence was key.

“I always wanted to be my own boss. I never wanted to punch a time clock,” he said. “I work my butt off as long as I see it’s worth it. But you know, if it’s for me, it’s always worth it.”

But when his mom got sick in the early ’90s, he knew it was time to come home. He took what he learned in Florida and searched for a spot to shine shoes in Pittsburgh. After making some calls, he learned they were looking for someone to set up in the Grant Building. The rest is history.

That same year, Arnie had his first orthopedic surgery. It wouldn’t be his last.

For many years, this job has served him well. Arnie doesn’t have to ask anyone to take off for a doctor’s appointment or a procedure. And as much as he misses his customers (and the extra income), he knows that it is just too risky to be working in-person right now.

For those with medical histories, the pandemic has been a challenging time. Arnie and I connected on this. He’s been cut open and stitched back together so many times, it’s a wonder he still gets around so well. And seven years ago, I was diagnosed with a brain tumor when I was just 17. On the days when things felt so out of control, Arnie grounded me with his wit and sincerity.

Arnie Newsome, photographed with the article's author Francesca Dabecco, outside the Grant Building in Downtown Pittsburgh. (Photo by Ryan Loew/PublicSource)

I laughed, but I can’t help thinking he’s right. Or at least hope so.

On one of the last warm days of the season, Arnie and I walked down to the corner store together. Even if he doesn’t go far, he still tries to get out at least once a day. That day, as his wooden cane engraved with his initials tapped along the brick sidewalk, he told me a story about a customer he had in his early days.

“He was an older gentleman. He sits up in my chair. I’m shining his shoes and he’s talking to me in a Southern drawl. He says to me, ‘I bet you got a story to tell.’ I said to him, ‘Did you come for a shoeshine or my life story?’ He said, “Both.’”

“And I replied, ‘I’m only selling shoeshines.’”

Arnie doesn’t share his story with just anybody, and I’m lucky that, over the course of this wild year, I’ve gotten to know him a bit better. There are many things the pandemic is changing, and there’s no saying whether a business like Arnie’s will get left behind.

Francesca Dabecco is a freelance journalist based in Pittsburgh. She can be reached at francescadabecco@gmail.com.