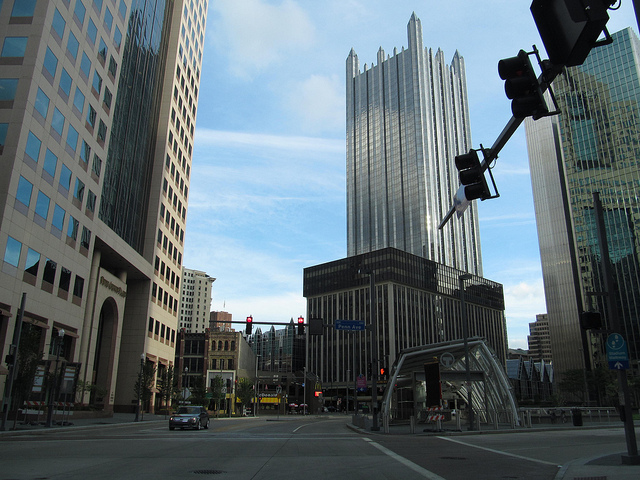 Pittsburgh is on a quest to become the country’s first “Smart City.”

The city got word over the weekend that Pittsburgh is among seven finalists advancing in the U.S. Department of Transportation’s Smart City Challenge to expand transportation performance by enhancing “safety, mobility, sustainability, economic vitality, and address climate change” according to the department [DOT].

“Smart Cities is not just about promoting the latest transportation and energy related technology,” Pittsburgh Mayor Bill Peduto said in a press release Tuesday. “It’s about applying those efforts to improve the lives of everyday Pittsburghers…”

Pittsburgh’s proposal highlights the establishment of “smart spines,” which the Pittsburgh Post-Gazette reports will assemble travel information to provide new services to the city.

Pittsburgh would act as a pilot for “smart spines,” situating the city as a “testbed for future transportation technologies,” according to the city press release.

A PublicSource article last month explored the advances Pittsburgh has already made in the transportation business, highlighting autonomous cars being developed and researched in the city through a partnership between Uber and CMU.

If self-driving cars were to become the norm, the city would likely need to upgrade and standardize traffic signals and redesign intersections to allow for streamlined performance by the cars.

Peduto, making mention of these technology advancements by CMU, said that even if Pittsburgh is not chosen in the challenge, the city will continue to move forward with these developments, according to the Post-Gazette.

Pittsburgh was joined by Austin, Columbus, Denver, Kansas City, Portland and San Francisco as the finalists.

The seven finalist cities have been awarded $100,000 to fine-tune their proposals, which are due in in April. The winner will be chosen in June. The winner will receive not only the $40 million in funding from the DOT, but also $10 million from Microsoft co-founder Paul G. Allen’s investment company, Vulcan, and $1 million in credits from Amazon Web Services to be used in its cloud and professional Services.

“This is where the world is going,” Peduto said, according to the Post-Gazette. “The question is, will Pittsburgh be a leader?”