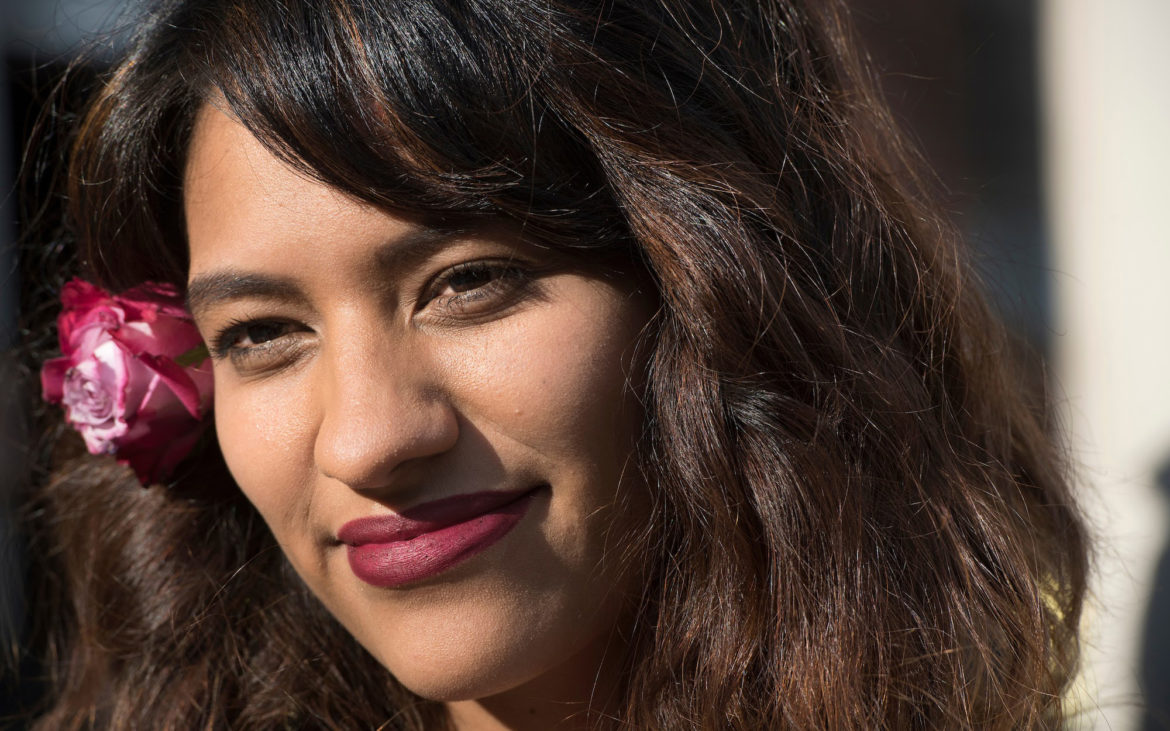 Maria Duarte, a DACA recipient who graduated from Chatham University on Sunday, April 30. Duarte came to the United States as an undocumented child with her mother when she was 5. They joined her father who was working in Georgia. (Photo by Martha Rial/PublicSource)

The labor movement, as we know it, is dying. In Pittsburgh, like in many metropolitan areas, unions are seeing a decline in their membership rolls and an aging workforce.

The future of labor may be in Pittsburgh’s smallest immigrant community.

“We need to focus on how we are going to diversify Pittsburgh more effectively,” said Dr. James Craft, a professor of business administration in the Joseph M. Katz Graduate School of Business at the University of Pittsburgh.

It is predicted that one out of two entrants into the United States workforce in 2050 will be Latino. “If unions are smart, they are going to be refocusing on this fast-growing worker population,” said Craft, who has studied labor and Latin America.

For May Day (International Workers’ Day), we talked with Guillermo Perez and Maria Duarte, both Latinos who are organizing for the betterment of Pittsburgh and their smaller communities. While Guillermo represents an older generation of Latinos and knows how organized labor can create a path to the American dream, Maria is a “Dreamer,” looking to make contributions as an advocate for the undocumented and marginalized. Here are their stories.

Guillermo Perez calls himself a student of labor. Standing in the lobby of United Steelworkers, surrounded by the stern-looking busts of past USW leaders — all men — he recites the leaders’ contributions to organized labor from memory. “Labor history has lessons to teach all of us,” he said.

His parents were among the many middle-class Cubans who fled Cuba in 1959 and settled in Florida during the chaotic early days of Fidel Castro’s revolution. Perez was born in Miami a few years later. “We were never questioned whether we belonged here,” he said. Although there was pressure to assimilate, he felt supported. His experiences inspired him to help other immigrants. Guillermo Perez, a labor educator (center) with the United Steelworkers, leads marchers down Sidney Street on the South Side at the May Day March for Immigrant Rights on Monday, May 1. (Photo by Martha Rial/PublicSource)

Perez graduated with honors from the University of Chicago with a degree in English literature in the early 1980s. The economy was in recession. The bachelor’s degree was not enough to find teaching work. “I had to face the reality of the working poor,” Perez said. “It had a radicalizing effect on me.” He discovered his life’s work when he met with struggling steelworkers on the South Side of Chicago while on assignment as a television producer.

When Perez, 54, moved to Pittsburgh six years ago to help found Pittsburgh’s Labor Council for Latin American Advancement (LCLAA) at the United Steelworkers, he expected the city to be more diverse for its size. Although the Latino community in Allegheny County has doubled since 2000, Perez said it is not growing at the same pace as other similar-sized cities in the United States. LCLAA was created in 1973 to advance the rights of Latinos by encouraging them to get involved in the organizing process. The council was one of the organizers of Monday’s Marcha por los Derechos de los Inmigrantes (the May Day March for Immigrant Rights) on the South Side.

Immigration has always been about labor for Perez.

As a labor educator, his job is to teach and develop leaders in the workplace to lead grassroots movements for social and economic justice.

In Perez’s previous job with an affiliate of AFSCME (the American Federation of State, County and Municipal Employees) in New York, he learned while serving as a bargaining agent for workers at a recycling plant how the fear of deportation and wage theft impacts undocumented workers. “The most important and meaningful thing I can do for them is advocate for immigration reform because their status is the biggest issue impacting them,” he said.

“Undocumented immigrants have almost all the same rights under the National Labor Relations Act as any other workers. They have the right to organize, to form and to join unions. And the unions they join have the legal obligation to represent them and advocate for them,” Perez said. Guillermo Perez speaks into a megaphone outside the ICE (Immigration Customs Enforcement) office on the South Side to denounce deportations on Monday as part of the May Day March for Immigrant Rights. (Photo by Martha Rial/PublicSource)

Undocumented workers in Pittsburgh are now asking him: Are they safe here in Pittsburgh? Should they move? His job has taken on a new urgency, educating the undocumented on how not to get deported.

“If we had an immigration policy that really worked,” Perez said, “people would have the opportunity to come here and be part of the American Dream... and help build a powerful and effective labor movement.”

Maria Duarte questions if the American Dream will ever become a reality for herself and for others of her generation.

There were many days growing up in rural Georgia, when the 23-year-old wondered if she would ever have the opportunity to go to college.

Duarte is a “Dreamer,” a term for an undocumented immigrant who arrived here as a child and attended school in the United States. She was 5 when she came to the United States with her mother from Durango, Mexico, to join her father who was already in Georgia.

“I had to live a hidden identity my whole life. If people found out about it, my family would be targeted because it was a very small town,” she said. Before she was born, her father had been working as a baker in the States, occasionally returning to Mexico to spend time with her mother. Maria Duarte holds the Sigo Falk Award for International Awareness and Citizenship she received at the closing convocation for Chatham University on April 20. (Photo by Martha Rial/PublicSource) Maria Duarte decorated her mortar board to pay tribute to her parents during Chatham University's graduation on Sunday at the David L. Lawrence Convention Center. Duarte, the first to graduate from college in her family, received a bachelor's degree in psychology. (Photo by Martha Rial/PublicSource)

Duarte was an exemplary student in high school, but she was not welcomed at Georgia’s top five universities because of her status.

She became a DACA [Deferred Action for Childhood Arrivals] recipient in 2012 when President Barack Obama announced his administration would stop deporting young undocumented immigrants who qualified under the DREAM Act. It was then she finally felt comfortable speaking out. “My activism is based on sharing my story. Most Pittsburghers don’t really know our experiences,” Duarte said.

She wondered how she was going to fit in as an immigrant and as a woman of color when she arrived on Chatham University’s Shadyside campus in 2015. A year passed before she found Pittsburgh’s Latino community.

She threw herself into organizing and activism on campus in addition to majoring in psychology and philosophy. She encouraged Chatham to divest from fossil fuels and volunteered with the Pennsylvania Student Power Network. She works with refugees as an intern at Jewish Family & Children’s Services and she also works part time at local law firm helping immigrants navigate paperwork.

Organizing for the Latino community is very important to Duarte. “I grew up watching my parents dedicate themselves to this country, only to be robbed of opportunity,” she said. Many of the undocumented workers in her hometown are farmers or work at chicken houses. “Nobody is going to come organize them,” she said. “They don’t want to come out of the shadows because it is not safe for them.”

Loneliness is a common obstacle for the undocumented because of the isolation and the culture of mistrust. Some days she feels selfish that she is not back home helping her parents. She has met other Mexican students in Pittsburgh, but they are here on student visas and the difference in statuses makes it hard to relate. When she has a rare free evening, Duarte will grab her best friend to go salsa and bachata dancing at the Los Sabrosos Dance Company in Garfield to combat her feelings of homesickness. The classes are held Mondays, Tuesdays and Wednesdays. Maria Duarte embraces her father with her 16-year-old brother, David (left), looking on. It was an emotional time for the family as Duarte became the first in the family to graduate college. (Photo by Martha Rial/PublicSource)

Ten days before her Chatham graduation, Duarte learned her grandmother in Mexico had suddenly passed away. “She was our anchor in the family,” said Duarte, who often craves her grandmother’s enchiladas dulces mole (a sweet mole sauce). Because her parents cannot have driver’s licenses, Duarte flew home following her final exam, so she could drive her parents and younger brother from Northern Georgia to Pittsburgh to witness her graduation on Sunday, April 30. Duarte had planned to participate in the May Day March yesterday, but instead had to drive the family another 10 hours back to Georgia, so they could mourn the loss of her grandmother.

Duarte plans to stay in Pittsburgh until she pursues her next dream of attending law school. She wants to help unaccompanied minors, immigrant children younger than 18 who do not have a parent or legal guardian in the United States to care for them.

“I want to challenge myself by finding what I can do for the community here,” she said. “A piece of paper does not make us valuable. Even though we don’t have a document that says we are legal citizens of this country, we still deserve all the respect and dignity everybody else does.”

Martha Rial is a Pittsburgh-based freelance journalist. She can be reached at martha@martharial.com.

Correction, May 3: An earlier version of the story  spelled the name of Dr. James Craft incorrectly. The mistake has been corrected.

One thought on “Is the future of Pittsburgh’s labor in its smallest immigrant communities?”