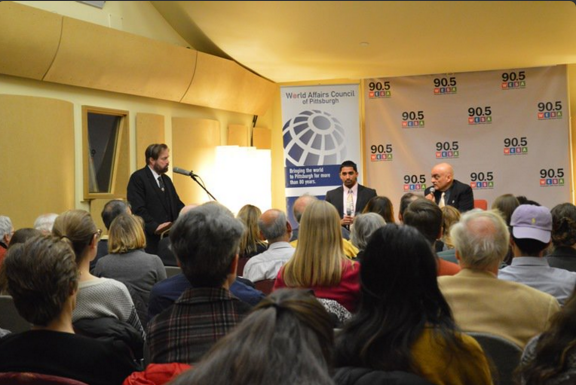 In December, shortly after the San Bernardino shooting, presidential hopeful Donald Trump called for a nationwide ban on all Muslims entering the country.

A February Pew poll showed that 40 percent of Americans now support blunt messages about Islam like Trump’s — even if that message is critical.

“People are going to look back in history and be embarrassed that this was a part of American history,” Wasi Mohamed, executive director of the Islamic Center of Pittsburgh, said Wednesday.

WESA’s Essential Pittsburgh program featured representatives from the Pittsburgh chapter of the Council on American-Islamic Relations (CAIR) and the Islamic Center of Pittsburgh (ICP) on Wednesday afternoon.

Mohamed, from the ICP, and Safdar Khwaja, from CAIR, answered questions from a live audience at the Community Broadcast Center about contemporary Islam and its role in Pittsburgh and the country. The World Affairs Council of Pittsburgh co-sponsored the broadcast.

“Most recently, there have been a lot of overseas conflicts and some of [those conflicts] have migrated into our homeland here — either through media or the internet,” Khwaja, the local CAIR president, said, “which has placed people in an inquisitive mode, in a, sort of, very concerned mode.”

The Islamic Center has taken a community approach to combating anti-Islamic rhetoric in Pittsburgh this year, hosting open dinners for people of all faiths and participating in public panels.

Since Mohamed became executive director last year, he said about 10,000 people have visited for outreach and information events and tours.

Mohamed said he doesn’t want to see Muslims retreat from the public.

“What we’d like as a center is to make sure we keep actively contributing,” Mohamed said, adding that becoming isolated is the worst thing the Islamic community can do.

According to the Pew poll, 14 percent of Americans think that about half of U.S. Muslims are anti-American.

Both Mohamed and Khwaja emphasized American values, including tolerance and acceptance of other religions, as important to Muslim Americans as well.

Khwaja, who has lived in Pittsburgh for more than 30 years, said he has always found acceptance in the city.

“This is the longest I’ve lived in an city my entire life,” Khwaja said. “I have never personally felt that I didn’t belong here.”

Grassroots, network-driven efforts are the best mode of creating interfaith networks, according to Khwaja. He said those efforts have continuously worked in Pittsburgh.

There were close to 6,000 Muslims in Allegheny County in 2010, according to The Association of Religion Data Archives.  Khwaja said there “needs to be a very active dialogue” among community members of all faiths.

Despite efforts in the city, including open communication between Pittsburgh Mayor Bill Peduto and the ICP, groups espousing anti-Islamic sentiment have cropped up.

In its most recent blog post, Act! Pittsburgh said an increase in refugees coming to PIttsburgh would result in violence. Previous posts accused all Muslims of “deception,” and claimed that CAIR banned Groundhog Day because the groundhog is a false idol.

A representative from CAIR in the audience on Wednesday laughingly denied that claim: “The groundhog is right 50 percent of the time,” he said.

In reference to Trump’s campaign pledges, promising to ban Muslims, audience members asked how the Islamic community in Pittsburgh would respond.

Mohamed said he would be angry if a politician tried to impose anti-Islamic laws in the city, but said he’s not worried because “Pittsburgh would never like that person.”