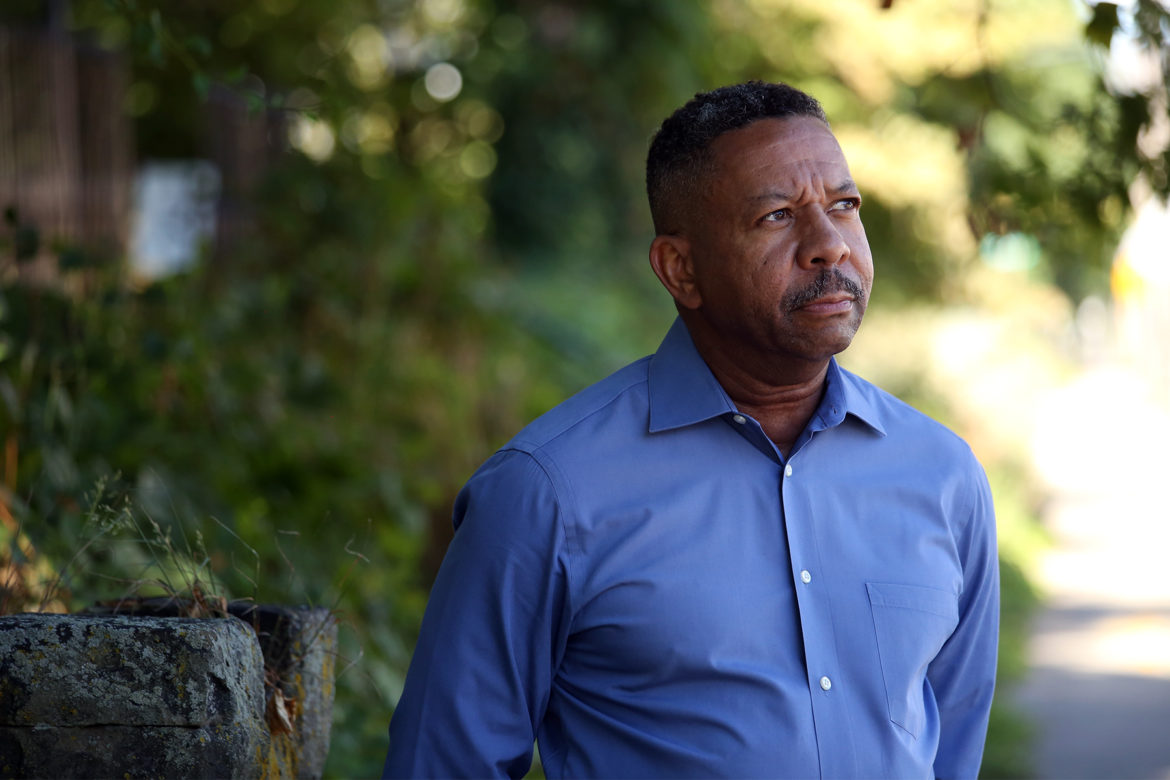 Jody Raeford is the executive director of the Foundation of HOPE, a nonprofit that works to prevent youth and young adults in the Northside from entering the criminal justice system for committing a low-level, first-time offense. (Photo by Ryan Loew/PublicSource)

At the Foundation of HOPE, Jody Raeford is looking to ensure community members aren’t arrested for behaviors rooted in unmet behavioral health needs.

The nonprofit works to prevent youth and young adults in the North Side from entering the criminal justice system for committing a low-level, first-time offense, such as theft. Through referrals from police officers, family members and other partners, the foundation connects residents ages 12 through 26 with mental health services or mentors as part of a voluntary program.

“We’re looking at systemic change,” said Raeford, the organization’s executive director. “We’re looking at, ‘how can we affect our local community so that people are not getting arrested for things that have nothing to do with criminality?’”

The diversion program lasts about six months, and charges are typically dropped afterward, Raeford said. Of the 54 residents who participated in the program in 2019, 53 did not reoffend within six months, an expectation of the program.

Now, the Foundation of HOPE is planning to expand its diversion services beyond youth. The city announced in late July that it will receive funding alongside the Congress of Neighboring Communities [CONNECT] to develop a pre-arrest diversion program for adults who commit low-level offenses. Zone 1 in the North Side will serve as the site of a pilot program, which the foundation will manage.

The city’s announcement comes amid residents’ continued calls for fundamental changes to policing following the killing of George Floyd in Minneapolis. Though diversion may address the harms of over-policing on Black and Brown communities and individuals with behavioral health needs, advocates and community members note that the success of these programs depends on implementation and buy-in from police and other stakeholders.

The pre-arrest diversion program is intended to eventually extend throughout Pittsburgh and, with CONNECT, into surrounding areas, the city stated in a press release July 20.

“When you think about homelessness, and you think about people with [substance use disorders] and food insecurity and mental health — those issues don’t know geographic boundaries,” Raeford said. “We really have to really be looking at this as a regional challenge.”

One model for diversion is law enforcement assisted diversion, or LEAD. As opposed to entering residents into the criminal justice system, police officers in LEAD programs redirect individuals to interventions meant to reduce harm, according to the LEAD National Support Bureau. Community members are connected with a trauma-informed intensive case management program that often includes supports such as housing and drug treatment.

The program that Pittsburgh and CONNECT are pursuing, which is focused on public health and harm reduction, will provide support to individuals who frequently come in contact with law enforcement specifically for low-level crimes related to poverty.

The LEAD National Support Bureau paid for a group of representatives from the Pittsburgh Bureau of Police, the Allegheny County Health Department [ACHD], Foundation of HOPE and CONNECT to attend the first LEAD National Learning Conference in January.

LEAD was primarily created to address the over-incarceration of Black and Brown people, as well as individuals experiencing homelessness and mental health and substance use disorders, said Najja Morris, director of the Seattle-based LEAD National Support Bureau.

Those who commit low-level offenses need someone to meet with them and understand their trauma, not “kidnap” or force them into treatment and programs, Morris said.

“It helps [prosecutors] to make a more informed, helpful and less harmful decision around what to do with participants, rather than just throwing the book at them everytime and keeping them incarcerated,” she said.

The county health department is allocating about $186,500 in federal grant funding to the city for creating a pre-arrest diversion program, allowing the Foundation of HOPE to hire at least three staff members this year, Raeford said. The funding comes from the Centers for Disease Control and Prevention’s Overdose Data to Action Grant.

ACHD is also planning to award Pittsburgh just over $397,000 for the second year of developing the program, said Otis Pitts, ACHD’s deputy director of public policy and community relations.

CONNECT is set to receive $250,000 for its first year of pursuing diversion, Pitts said. 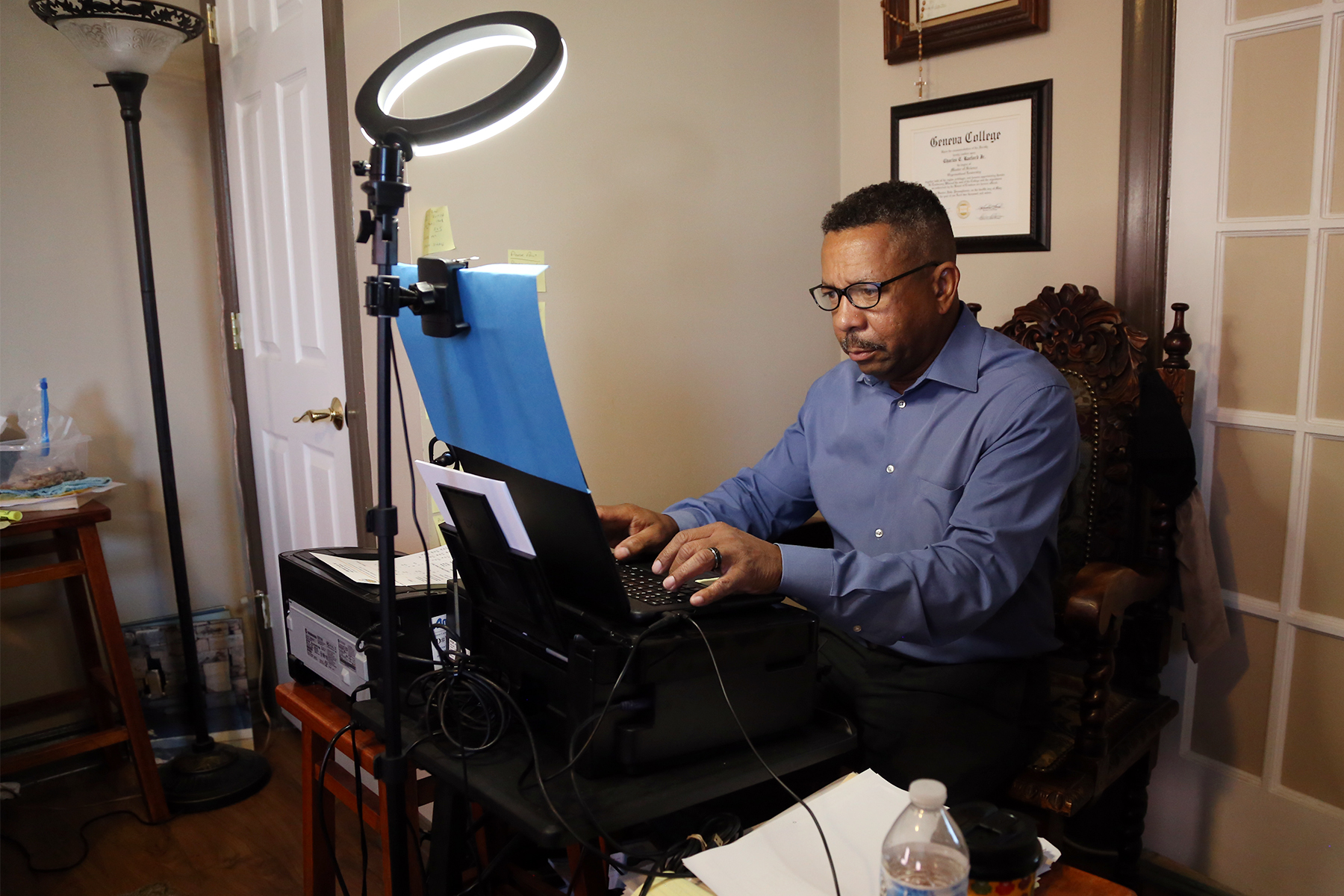 Jody Raeford, executive director of the Foundation of HOPE, works out of his home in Coraopolis. (Photo by Ryan Loew/PublicSource)

“People are not really aware of some of the underlying causes of substance use, so we’re trying to raise awareness around behavioral health issues and mental health issues,” Pitts said. “Rather than [having] people cycle through the justice system, we’re trying to create more pathways for people to engage in evidence-based care and treatment.”

ACHD is providing the city and CONNECT with data on the impacts of opioid and substance use disorders, which Pitts hopes will help inform how the diversion program is implemented.

Outside of Pittsburgh, the municipalities have “a lot of similarities for how many differences they do have,” said Lydia Morin, executive director of CONNECT.

“We can, over time, develop a support system that doesn't make 911 the first and last call for that individual.”

Allegheny County is divided into 130 municipalities, a number that results in more than 100 municipal police departments varying in resources, staffing and funding. Many municipalities surrounding Pittsburgh lack sufficient social services, she said, and housing, transportation and mental health are all needs in these areas.

In Pittsburgh, police officers respond to “a host” of calls that are more related to social services than crime, said Commander Christopher Ragland, of Zone 1. But when a need for social services isn’t  met, the problem can evolve into a criminal matter, he said.

The criminal justice system is not where mental health and substance use disorders are best addressed, Ragland said. With the pre-arrest diversion program, he aims to help community members.

“We can, over time, develop a support system that doesn't make 911 the first and last call for that individual,” he said.

For Fawn Walker-Montgomery, the pre-arrest diversion program is a good start for meeting the needs of the municipalities outside of Pittsburgh, but its effectiveness ultimately relies on its implementation. Born and raised in McKeesport, Walker-Montgomery is the co-founder and executive director of Take Action Mon Valley, an organization dedicated to addressing community violence.

She questioned what the breakdown would be between mental health workers and police officers in the program, what agencies would respond to calls, whether Black-led organizations would be involved and if culturally-competent training would be included.

“When you look at some of those programs you have to make sure they’re not cookie-cutter, or we’re not doing anything that we’ve already done that we’ve proven to be [ineffective],” Walker-Montgomery said. “How was this community even involved in the process, will the community be involved?” 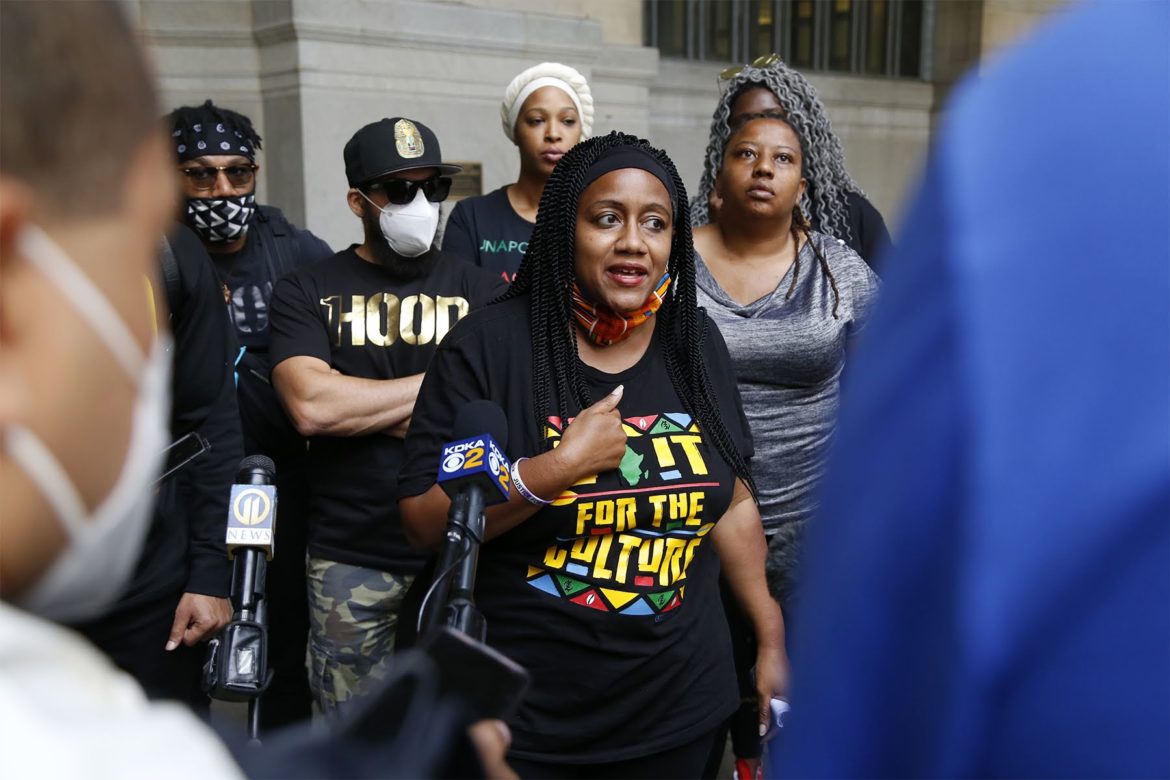 Fawn Walker-Montgomery, member of The Allegheny County Black Activist/Organizer Collective and co-founder of Take Action Mon Valley, addresses a crowd gathered at the City-County Building in Downtown on June 15. (Photo by Ryan Loew/PublicSource)

Walker-Montgomery is also a member of The Allegheny County Black Activist/Organizer Collective, a group that presented 12 demands to the city and county in June following Floyd’s killing by Minneapolis police. The collective’s demands include defunding and demilitarizing the police and investing in Black communities.

Defunding the police involves reallocating departments’ funding to social services and community-based supports. Police department budgets could be cut by more than 35% and invested into housing, transportation and education, and militarized equipment such as rubber bullets could also be taken away, Walker-Montgomery said.

For Morris, the goal of LEAD has always centered around the eventual recognition from police officers and jurisdictions that they should not be arresting or engaging with individuals experiencing poverty or behavioral health issues. Floyd’s killing has only accelerated the process of reaching that goal.

Looking ahead, CONNECT is seeking to establish a policy coordinating group to determine what pre-arrest diversion could look like for the county. The network also aims to launch community leadership teams this fall to provide an opportunity to residents, including those with lived experience, to share what they’d like in a program.

The pre-arrest diversion program must involve collaboration between the city, county and surrounding municipalities, Marsh said.

Changing the system requires understanding its structure, Walker-Montgomery said. The 130 municipalities in the county each have a different institutional structure, and the struggles of the suburbs outside of Pittsburgh are often left unrecognized. Communities like those in the Mon Valley are worthy of being listened to, she said.

“We deserve to be heard and recognized by name,” she said. “[We] want you to recognize our pain, say our names and then really help us over here get some effective change.”

Emma Folts is an intern with PublicSource, she can be reached at emma@publicsource.org.

This story as fact-checked by Emily Briselli.