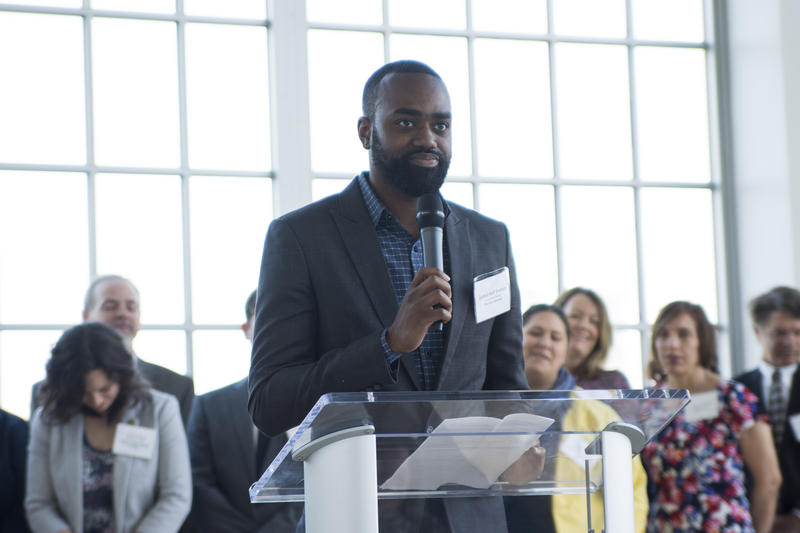 A candidate for Pittsburgh City Council who was accused of assaulting a woman and having non-consensual sex with her released a statement late Tuesday indicating that the district attorney has concluded an investigation and won’t be pursuing charges against him.

A spokesman for the Allegheny County District Attorney’s office said the office investigated the allegation and did not find evidence to meet the burden of proof needed to prosecute any criminal charges against council hopeful Quincy Kofi Swatson.

The allegation against Swatson appeared in a September court document in which the woman applied for a temporary protection-from-abuse [PFA] order; the judge granted the temporary PFA. PublicSource does not name victims of alleged abuse.

Swatson, a North Side native who is running for the District 1 city council seat, said in a statement emailed at 11:42 p.m. Tuesday that the district attorney’s office spent three months investigating the woman’s claims and has “enough evidence to not pursue charges against” him. The statement, released by Swatson’s campaign, said he had “cooperated fully with authorities” and gave investigators interviews, DNA samples and access to text messages. The statement quotes Swatson’s attorney Blaine Jones.

“We have been adamant about the dishonest nature of these allegations and [their] suspicious timing,” Jones said. “My client, Quincy Swatson, has been innocent from the start.”

Mike Manko, a spokesman for the DA, wrote in an email Wednesday morning: “Our office, along with the city police, thoroughly reviewed the complaint involving this woman and based on the information that she provided, we made the determination that we would not be able to sustain a burden of proof on any sort of criminal charge moving forward.”

The woman stands by her accusation.

“The weight of being a woman who has the courage to report a sexual assault and does not find any success with the legal system is one that is a very heavy weight to carry,” the woman said in a written response on Wednesday.

In a phone call Wednesday morning, Swatson reiterated that the accusations against him were false. However, he said, he cooperated with the investigation because he wants to support victims of assault and sexual violence.

“That’s why I remained silent and cooperated with investigators because I need to practice what I preach,” he said. “I know that I have never assaulted or abused anyone.”

Judge Hugh McGough issued a temporary PFA to the woman regarding Swatson on Sept. 20. Swatson announced in November that he was running for city council.

As PublicSource previously reported, another PFA was filed against Swatson and granted in 2014. That petition also referenced a 2012 incident in which a different woman said Swatson was arrested after allegedly throwing her out of a car. The woman in this case and Swatson said previously these matters were dismissed.

Another attorney for Swatson James Bogatay indicated in the campaign statement that, on behalf of Swatson, he planned to request that the news organization that published a story on the accusations against Swatson retract, apologize or correct the story. PublicSource published a story on Nov. 13 based on court records and interviews with Swatson and the accuser; it was the only story published on the matter. PublicSource had not received the request as of 2 p.m. Wednesday.

In his statement, Swatson said the past three months have been “difficult” but that he appreciates the DA’s “diligent investigation.” He added that he won’t name or pursue legal action against the woman who made the allegation and says he “will continue to fight for survivors and will not bring attention to the small number of false accusers.”

During the investigation, Swatson was asked to step down as executive director of The Door Campaign, a nonprofit he founded to help educate children about science, technology, engineering and math. Swatson was asked to take temporary leaves of absence from several boards he sat on, the statement said. His campaign also suffered setbacks as a result of the investigation, according to the statement.

Swatson was recently selected by Pittsburgh Magazine and PUMP as a 40 Under 40 honoree in October and by the Pittsburgh Business Times as a winner of the publication’s 30 Under 30 award in September.

On Monday, Swatson and three other candidates for the District 1 seat participated in a candidate forum with North Side voters. There, Swatson voiced support for community policing, reforms to the Pittsburgh Water and Sewer Authority to ensure all residents have clean drinking water and a commuter tax for non-residents who work in the city.

Swatson and the other candidates will meet again on Monday, March 11 at the BJ Event Center in the Woods Run neighborhood of the North Side. The Allegheny County Democratic primary will be held May 21.