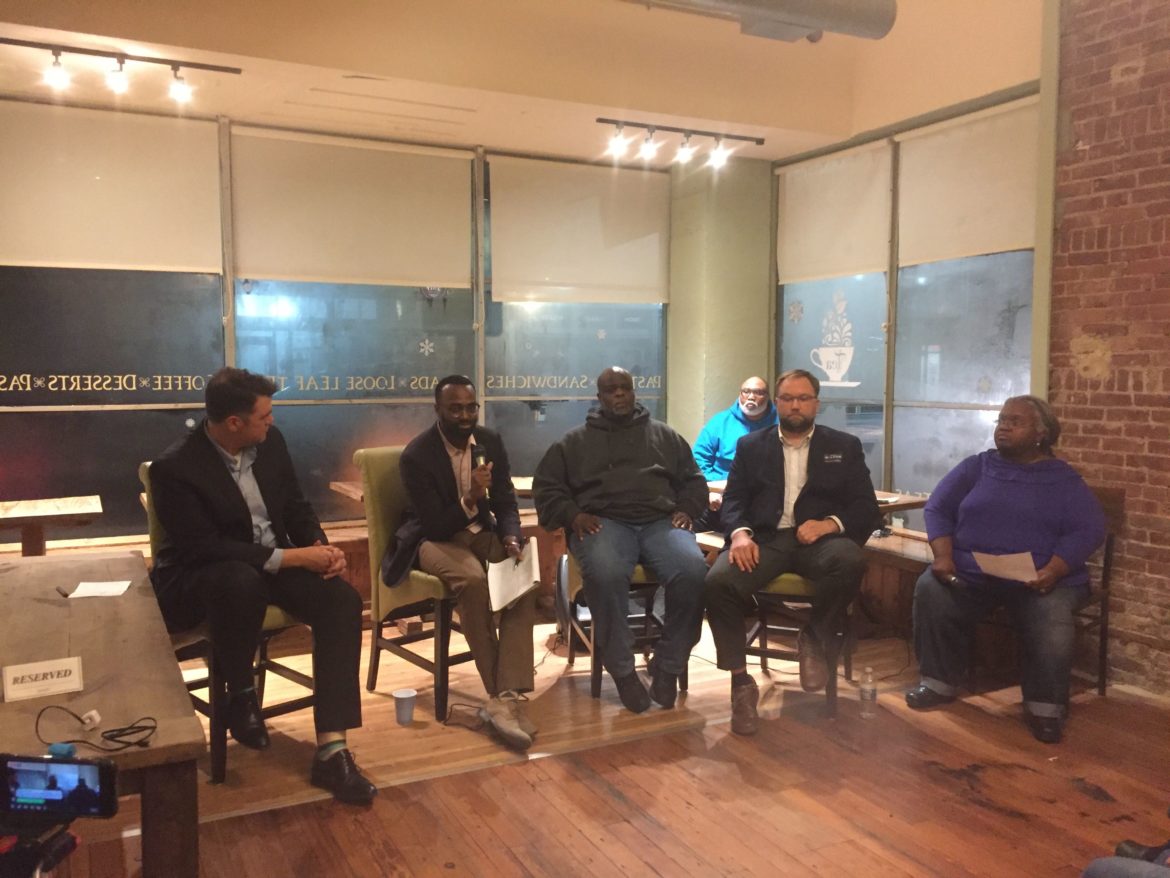 In a crowded field of Democratic candidates for Pittsburgh City Council’s North Side seat, one contender was notably absent from a Feb. 25 forum for all the candidates: the person who currently holds the position.

Before the forum at Arnold’s Tea began, rumors were swirling among organizers — Councilwoman Darlene Harris would be a no-show. Harris has held the seat for almost 13 years now, first getting elected in 2006 in a special election and holding onto the seat the following year in a Democratic primary.

“She was invited and confirmed and we found out today that she wouldn’t be here,” organizer Leeann Younger said when the forum commenced around 7 p.m.

The four candidates who did show up were Chris Rosselot, Quincy Kofi Swatson, Mark Brentley Sr. and Bobby Wilson. They used the event to call for reforms and fresh blood to represent the city’s North Side in Harris’ absence. All agreed that the Pittsburgh Water and Sewer Authority [PWSA] should remain a public entity and that clean drinking water is a top priority. They offered a variety of approaches related to public safety and neighborhood development.

The city’s Democratic primary elections will be held May 21. The deadline to register to vote is April 22. 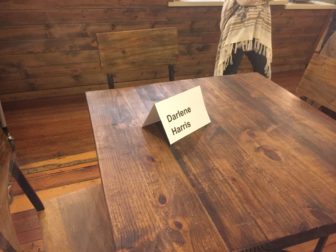 It’s a diverse field of candidates, from Rosselot, a former aide to Sen. Bob Casey, to Brentley, a laborer for the city’s water authority and a 16-year veteran of the Pittsburgh Public Schools board. The other candidates, Swatson and Wilson, are a former nonprofit leader and medical researcher, respectively. Candidates have until March 12 to file their paperwork and be placed on the ballot.

The event was organized by a group of North Side residents — who call themselves Proactive Citizens — as a way to demystify the city council political process and give residents opportunities to hear from candidates. The group set up tables for each candidate to interact with voters before and after the forum and also set up a table to register new voters. At least one person, 19-year-old Arnold’s Tea chef Keith Harris, took them them up on the registration opportunity.

It’s not entirely clear why Harris didn’t appear at the forum, organized so North Side voters could hear from everyone running for the District 1 seat. Though confirmed, organizers said Harris said she wasn’t planning to attend. A representative from Harris’ campaign said she simply double booked and couldn’t make it.

While Proactive Citizens has gone through several iterations and name changes since it formed in 2017, some of its leaders have expressed their displeasure with Harris on Facebook. However, Proactive Citizens’ organizers say they are not an anti-Darlene group.

“Most people think we're an anti-Darlene group. We're not,” said Danielle Graham Robinson, a Brighton Heights resident and Proactive Citizens organizer. “We want to make sure we're not leaning towards one candidate in anything we do as a group because we want to make sure people are deciding for themselves who is best to represent the North Side.” 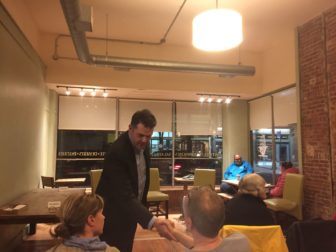 No candidate mentioned an allegation made against Swatson last year by a woman who described him forcing non-consensual sex in a court filing. The allegation was reported to police. He was not charged. While Swatson canceled an event to launch his campaign after that news broke, he showed no signs of slowing his race Monday night.

“[The allegations] didn’t come up because they are completely false,” Swatson said after the forum.

During the forum, candidates were allowed four minutes to give their “elevator speeches” and then asked a series of questions that organizers drafted after surveying potential voters. Debate focused on water quality and affordable housing, some of the biggest issues facing Pittsburgh overall.

Wilson, the chief technologist and project quality manager at the University of Pittsburgh’s Emphysema and COPD Research Center, said he wants to see development benefit North Side residents.

“With future development, let's make sure there are good-paying jobs here, that development that happens on the North Side brings opportunity for people,” Wilson said. “I think that's important.”

He also called for the city to increase the amount of money it’s putting into its Housing Opportunity Fund, which is currently $10 million per year.

“It shouldn't stop there. Right now, it's at $10 million; we should do 10 times that. We should do $100 million to really address these problems,” he said.

Brentley, who previously worked as a laborer for the city’s Public Works department and PWSA, called for more affordable housing and said that he’d like to dispel the “myth” that it’s only intended for people with low incomes.

“The elephant in the room on this issue is the issue of race, at times, because we still believe affordable housing can only sometimes mean poor or people of color,” he said. “How do we move past that myth and begin to discuss it? This North Side is big enough. We all can live together.”

Brentley, who noted that he grew up in the North Side and attended Perry High School, served on the board of the Pittsburgh Public Schools from 2000 to the end of 2015 when he stepped down. During his tenure, he was known to be outspoken and oppose many of the measures that came before the board.

Swatson said he’d like to see the North Side revitalize and become the “neighborhood of choice” for Pittsburghers and newcomers alike.

Swatson, however, differed on issues of policing with Wilson. Wilson called for more police on the streets to keep communities safer. Swatson, the who founded The Door Campaign, said instead he’d like to see a focus on community policing and have police officers move back into the city. Currently, officers can live up to 30 air-miles from the city.

“We need to focus on having police in our communities,” he said. “This is controversial, but I think police should live in the community or close to the community.” 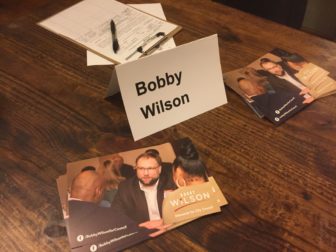 Wilson said he wanted at least 200 additional officers on the force to reduce the need for officers to work long shifts and make decisions while fatigued.

While all the candidates agreed that keeping PWSA public was important, they offered different approaches to ensure residents have clean water. From July 2012 to December 2015, the French company Veolia managed PWSA. The city has blamed the company for mismanagement and changing corrosion control chemicals, a move that’s been blamed for increasing levels of lead in the city’s drinking water. During the summer of 2017, the city briefly distributed free water filters to residents.

Brentley said if elected he’d launch an investigation into why the city stopped giving out the filters to residents.

“Where are the water filters?” Brentley asked. “Distribute them so when you and I get up in the morning we can at least have clean water while we discuss the political side of dealing with the issue.”

Rosselot said he wants to keep PWSA public so it’s easier to hold it accountable when issues arise.

“If I am representing you and you have water issues, sewer issues, I want to be able to bring representatives from PWSA to community meetings to hold them accountable,” he said. “That's critically important.”

Candidates also made a point to say they wanted to engage with voters who didn’t attend the forum.

Rosselot argued that as the manager of Casey’s Southwestern PA field office, he was working with and supporting people of all political stripes, especially those who didn’t vote for the senator. He said he’d take that same approach to city council.

For Keea Dorsey, a 28-year-old Observatory Hill resident who attended Monday night’s forum, seeing candidates and other voters engaging with one another was striking. She wants to use what she witnessed to help teach the students she works with at The Pittsburgh Project and encourage them to engage with their communities.

“It can be really easy to engage on social media, but not when it counts,” Dorsey said.