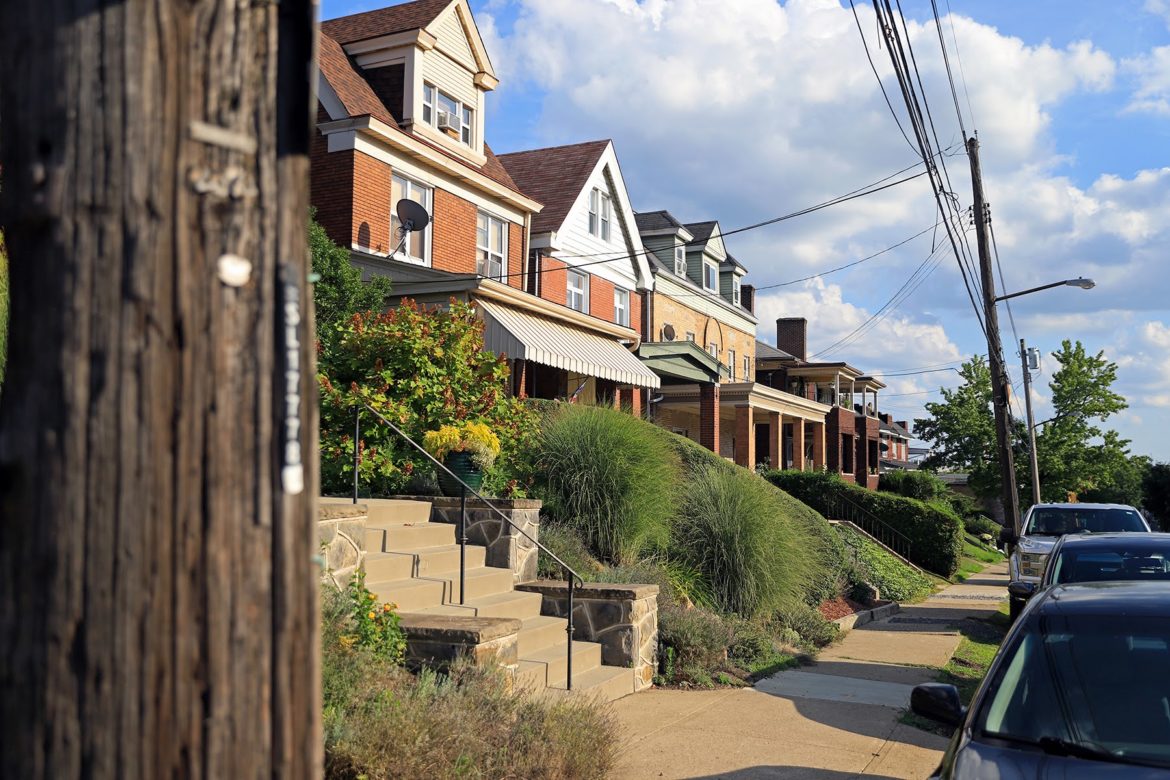 Millions of dollars in housing aid have been directed by state and local programs to stave off the threat of evictions and foreclosures. Some neighborhood advocates worry it won't be enough. (Photo by Jay Manning)

When Autumn Young-Dorsett lost her job as a life skills assistant teacher due to the COVID-19 pandemic, paying the bills became a lot more difficult. Her employer continued to pay her until mid-June, at which point she had to file for unemployment. Mortgage payments presented the biggest burden, but other expenses also added up.

She’s been getting guidance from the Bloomfield-Garfield Corporation, a community group that in 2012 sold her the home she currently lives in with her children. She’s since filed for housing assistance from the Pennsylvania Housing Finance Agency but has found the process confusing. In late July, she received a response by email from the agency. It asked her for proof of income, and since she hasn’t yet received any unemployment compensation, she wasn’t sure what to do next.

Residents like Young-Dorsett are facing unprecedented housing insecurity during the pandemic, and a slew of programs are available to help families in need. Among the programs are the Pandemic Mortgage Assistance Program available through the PHFA, the CARES Rent Relief Program administered by the PHFA and managed locally by Allegheny County and the Housing Stabilization Program from Pittsburgh’s Urban Redevelopment Authority [URA].

The programs appear to be helping. But even with the help, some local community advocates worry that help isn’t coming fast enough or is not big enough to stave off a bout of evictions and foreclosures they see on the horizon.

Director of Allegheny County Economic Development Lance Chimka notes that it’s extremely difficult to quantify the need for rent relief in the county. An analysis from earlier this year estimated the need to be between $25 million and $56 million, with a median of $40 million, for the period of March through December, according to Chimka. And this only covers the additional demand caused by the pandemic. 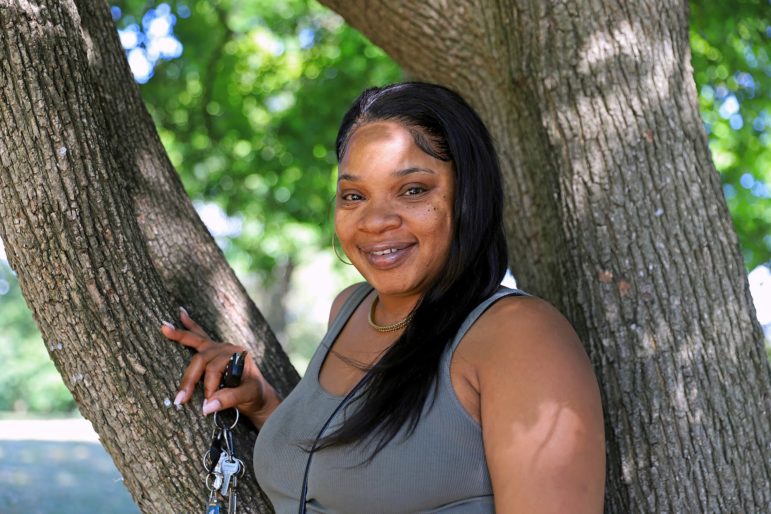 Autumn Young-Dorsett, pictured here in Mellon Park, bought her home in 2012 from the Bloomfield-Garfield Corporation. (Photo by Jay Manning/PublicSource)

While the federal government’s moratorium on evictions expired July 25, with rent due Aug. 1, Gov. Tom Wolf extended Pennsylvania’s moratorium through August. Across the country, about 21% of people living in rental units are at risk of being evicted by the end of September, according to the COVID-19 Eviction Defense Project. In Pennsylvania, 17% of its residents who live in rental properties, around 624,140 individuals, are at risk of eviction by the end of September.

For Young-Dorsett, the pandemic has forced her to seek help in providing for her family, which makes her feel like she’s done something wrong.

Below are some of the main programs available for residents looking for relief money to help pay for their rent or mortgage.

The URA’s Center for Housing Opportunities is also partnering with Neighborhood Legal Services to offer funds for legal assistance for Pittsburgh residents — up to $3,000 for renters at risk of eviction and up to $5,000 for homeowners looking to get a deed transferred. More information can be found here.

These programs have received a great deal of demand. The county received more than 2,600 applications for the Rent Relief Program as of July 29, according to spokesperson Amie Downs.

Pittsburgh’s URA screened more than 1,200 calls since Apr. 1 for its Housing Stabilization Program, according to spokesperson Gigi Saladna, and helped 235 households in a four-month period, with assistance for 500 more on the way. To compare, the URA assisted a total of 151 households in all of 2019.

As of Aug. 4, 181 homeowners in Allegheny County applied for mortgage relief through the PHFA, according to spokesperson Scott Elliot.

The programs for rent and mortgage relief are helping those who can get through, but there is an ever-mounting concern that these programs can only do so much to stop what looks to be a coming tide of evictions.

Hill District Consensus Group Co-Director Carol Hardeman has been helping residents all around the Pittsburgh area navigate the available rent and mortgage relief programs. She’s been taken aback by not just the volume of people looking for help but by the vast geography of where they’re from.

“People have been reaching out from outside of the areas that we’re used to, such as Monessen, Ford City, just all around,” Hardeman said.

The forms for these programs can be difficult to complete because of technology and language barriers for some applicants. It can also be a lot of reading.

Rick Swartz, the executive director for the Bloomfield-Garfield Corporation, said he believes housing relief programs work best when they’re localized because residents often are more familiar with local agencies and how to access them. In his view, the aid from the URA has been easier to access for folks than programs that stem from the PHFA, a state agency. 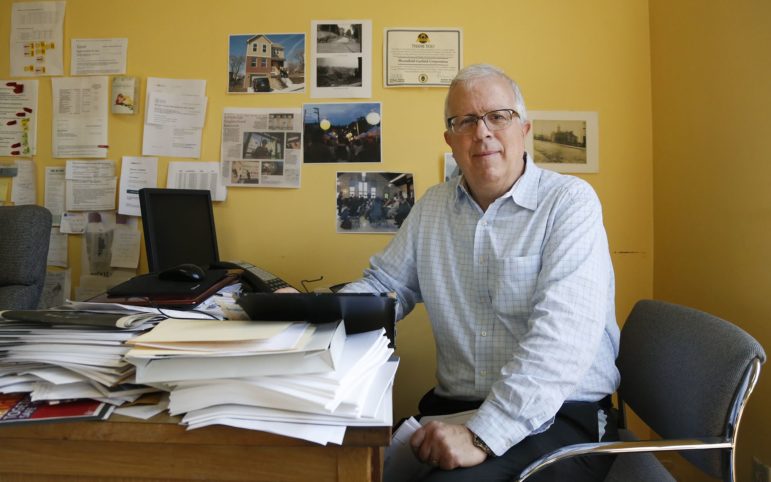 Rick Swartz is the executive director of the Bloomfield-Garfield Corporation. (Photo by Ryan Loew/PublicSource)

Swartz said the state lacked foresight in “centralizing a task that could have been much better implemented were it done in a decentralized manner.”

“It wasn’t too difficult for someone who’s looking for mortgage relief, but she had to come here in order for us to get it done,” Swartz said. “So that means that if I’m going to be of help to people, I’ve got to take time out of my day to do this. There’s no reimbursement from the state for the time that anybody spends helping people apply for these programs.”

He commends Pittsburgh for financing its own affordable housing fund back in 2017.

“There’s very little local funding, even from the county here in Allegheny County, that goes to this type of programming. The county council, the county executive have not emulated what the city has done” with an ongoing affordable housing fund, Swartz said. “They could, but they haven’t.”

Swartz said this means some Allegheny County residents, particularly those outside of the city, may not be able to get the help they need in the coming months, once the state and federal aid runs out.

“If you live in more depressed parts of the county, and you’re having trouble keeping up with your rent and you’re not able to get back to work, the county program courtesy of state money is all that they really have, and so that could get exhausted very quickly because that’s just a one-time infusion of money,” Swartz said.

Lawrenceville United Executive Director Dave Breingan said mass displacement and housing insecurity isn’t anything new in his neighborhood, but the pandemic has exacerbated the problem.

“Eviction moratoriums have staved off the court processes for now, but it’s just been kicking the can down the road,” Breingan said. “That back rent that is owed isn’t going anywhere for a lot of folks. So we are definitely seeing a huge increase in need and in threats of eviction or expectations of eviction.”

The relief programs currently available are absolutely helping,  but the funding will not be nearly enough to address the breadth of the problem, Breingan said. It’s unclear if more funding will be allocated in the future.

“There’s just so much uncertainty, and the people who are already facing a really difficult situation, it is really harrowing and difficult for them to navigate it,” Breingan said. “And just the patchwork of safety nets that have been created, it’s really complicated, and it’s not all obvious. Even to me, and I do this for a living.”

Many residents have been deeply struggling during the pandemic to pay their rent or mortgage. Young-Dorsett remains hopeful despite her adversity.

“It’s just a mess, but I’m keeping my hopes up,” Young-Dorsett said. “I believe in the Lord, and I have faith.”

Update (8/14/2020): This story was updated to include additional information on qualifications for the CARES Rent Relief Program.