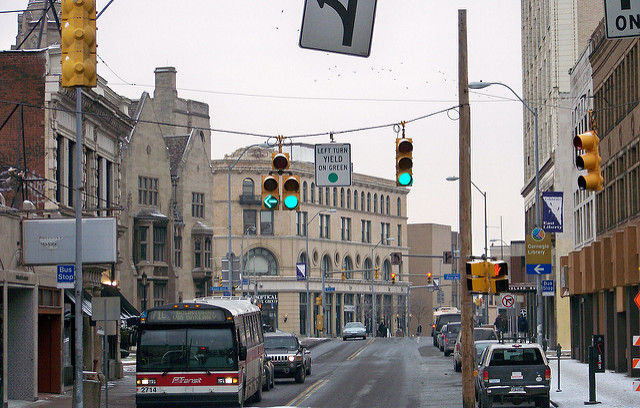 Can $10 million keep Pittsburgh from pushing out low-income residents?

Carmen Brown, president of Action United, is hopeful city voters will have a chance to consider a new Housing Opportunity Fund to increase affordable housing and to reduce blight.

As a resident of the East Liberty and Lincoln-Lemington area, she’s seen how rising rent has forced out community members who’ve grown up there but can’t afford to stay.

“They want to share also in the new Pittsburgh and not be excluded from it,” Brown said today at a press conference in Marshall-Shadeland.

This morning marked the start of a petition drive by Pittsburgh United and a coalition of other organizations, including Brown’s group, to put the fund up for a vote as a November ballot initiative.

Under the plan, roughly $10 million a year would be raised through a 1 percent increase to a point-of-sale realty transfer tax.

Details are still being developed, but supporters estimate that the fund could raise new money each year to rehabilitate 270 homes for renters, to create 234 new affordable homes and to provide 180 families with rental assistance.

As Pittsburgh continues to garner national accolades for its redevelopment, many fear that some residents are being left behind or forced to leave.

According to a report by the city’s Affordable Housing Task Force, Pittsburgh has a shortage of some 17,000 housing units that would be affordable to families at 50 percent and below the city’s median household income.

A housing trust fund is a key recommendation of that report, which was completed in May, and underscores the need for stable housing in neighborhoods that have seen significant investment for the first time in decades.

The report mentions a transfer tax increase as one of several possible ways to pay for the fund. According to that document, a 1 percent increase could bring in $9 million annually, though totals depend on the market for the year.

Mark Masterson, who was on the housing task force and serves as executive director of the North Side Community Development fund, said he drives through redeveloped areas like Lawrenceville and East Liberty and hardly recognizes them.

That creates development challenges, and he said some city neighborhoods are not benefitting from redevelopment. Having a local source of funds is crucial, he said this morning.

Details of the fund are still being worked out, but, if approved, it would allow community nonprofits to submit projects to a community advisory board and then a housing trust fund board, which would decide how money is distributed.

Jennifer Rafanan Kennedy, director of strategic campaigns at Pittsburgh United, said the fund could help developers bridge the gap between what’s needed to create a market rate unit and one that would be affordable housing.

Funds could also be used to rehab blighted property.

In front of a house under renovation in on Woodland Avenue, Brightwood Civic Group President Angel Gober said an area revitalization group has been running for nearly 10 years, and progress has been slow.

Money is limited, and more resources would mean faster progress.

“Right now, we are contributing to the blight in this community because of the lack of funds,” Gober said this morning.

The groups are hoping to gather 15,000 signatures over seven weeks to put the measure on November’s ballot.