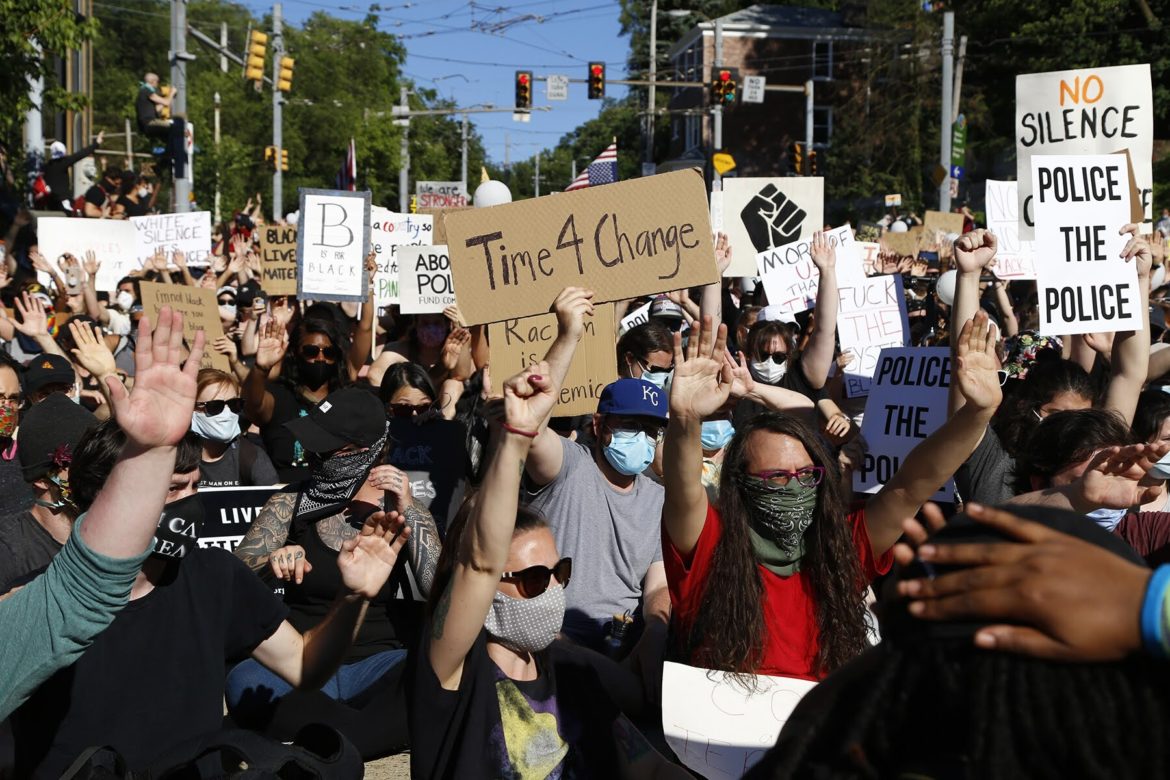 As calls for police reform continue, local organizations and community members in Pittsburgh have been getting together since January, coalescing around a new vision for public safety.

The Coalition to Reimagine Public Safety is set to release a report next week with recommendations on how to make residents safer by reducing police interactions, especially in Black communities.

Headed by 1Hood Media and the Alliance for Police Accountability, the Community Vision report is expected to list more than 20 recommendations broken into four categories: community violence, homelessness, mental health and drug use. Coalition members felt that police intervention is not needed in these areas and that funds should be diverted from law enforcement to local organizations already working within and with the community.

Allegheny County boasts more than 100 police departments, and the report aims to be a new take on law enforcement at a time when George Floyd’s death at the hands of Minneapolis police officer Derek Chauvin has spurred both city and county conversations about new approaches to public safety. Funded by The Pittsburgh Foundation and the Staunton Farm Foundation*, the coalition brought resources and paid staff to an issue that has often been the province of volunteers and activists.

“We're really talking about making some steep cuts to the policing budgets,” said Brandi Fisher, president and CEO of the Alliance for Police Accountability. “Take the money that we're putting into the policing budget to respond to people who are experiencing these things and put that money into institutions and community organizations that already exist, that are helping these people, but are greatly under-resourced.”

‘We're the ones that you're targeting’

Among the criticisms surrounding those recommendations: They came from a 15-member task force, picked by Peduto, that largely left out advocates that had led last year's protests or had recent experience with the police. Fisher was originally named as one of the members of the mayor’s task force but later declined to serve on it.

Mayoral spokesman Timothy McNulty wrote in response to PublicSource’s questions that the task force included "ex-offenders, protestors, academics, and members of immigrant and refugee communities" who worked for months to examine policing, and "should be lauded, not attacked."

Coalition members, though, wanted an open dialogue that was community-led and centering the people who are directly impacted. 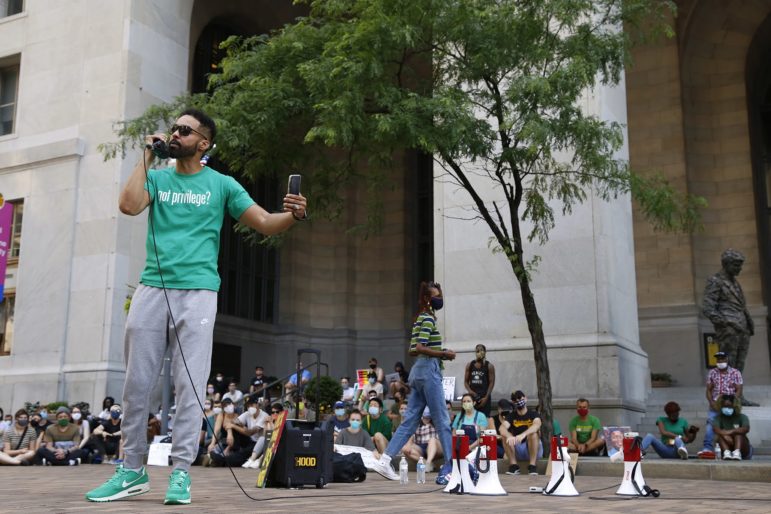 In preparing the report, the group held meetings open to anyone to attend and add input. Fisher said coalition organizers allowed attendees to go into the draft report, see what was being written and add comments based on their own experiences and knowledge.

“This is a public safety movement,” Fisher said. “And we are doing it centering the people who are directly impacted by this incarceral system.”

The coalition's main thrust is for police to be de-centered from the lives of Black residents and for community organizations to be able to take the lead and answer public health and mental health crises instead.

“The overwhelming theme was that there are already people in these communities who are helping with these issues,” said Dolly Prabhu, a staff attorney and Equal Justice Works Fellow at the Abolitionist Law Center, which was part of the coalition. Individuals and organizations that have been acting as “peacekeepers” need to be supported, she said.

“We've been providing services to people who are actively using drugs for 26 years. We probably see easily, an average of 125 or 150 people a week,” Bell said. “We have never had a situation where we needed to call the police for anything.”

The report’s authors were conscious of the words used throughout the document, using words like “drug use” as opposed to “drug addicted.” 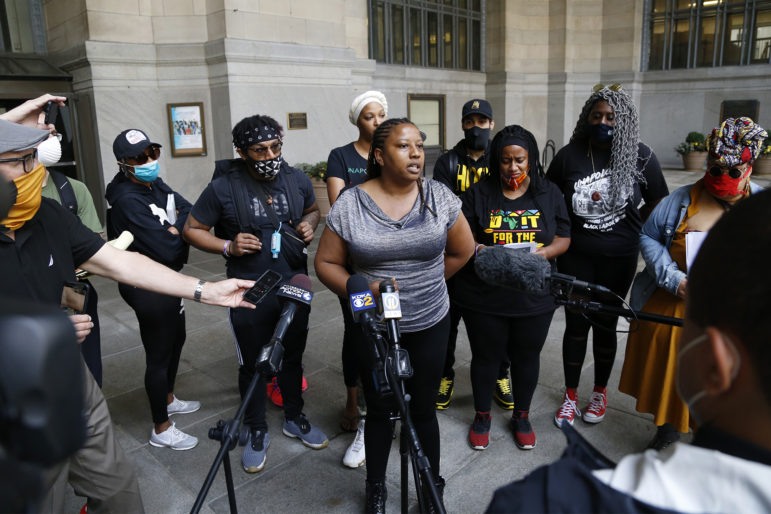 Brandi Fisher, president and CEO of the Alliance for Police Accountability, speaks at a press conference on the portico of the City-County Building on June 15, 2020. (Photo by Ryan Loew/PublicSource)

The recommendations also call for the development of a system that would divert people during a crisis from the police. Instead of calling 911 and having the police arrive, the call would instead go to an organization or individual that is trained to respond.

Allegheny County already has a call center to handle mental health crises. resolve Crisis Services is a unit of UPMC hired by the county to send in mental health professionals instead of, or alongside, police. Slow response times have limited resolve’s involvement with police.

The report’s recommendations call for cuts to the police budget. Funding that would have been spent on training police officers on issues like addressing homelessness would instead go toward organizations already doing that work.

“There are so many organizations and folks that are doing the work on the ground, with little to no resources,” said Jasiri X. “What would happen if those organizations and groups were resourced to the level that we should be? How could that impact and change the reality for us in our community here in Pittsburgh?”

Preparing for change and pushback

While creating the report, the coalition has been in contact with the Allegheny Department of Human Services, according to Fisher. The department, which has been quietly exploring public safety responses to behavioral health problems, declined comment, other than saying it was not part of the coalition.

After the release of the report, the coalition plans to continue that relationship and is hoping to start working with city officials in Pittsburgh, according to Fisher and Jasiri X.

McNulty wrote that the Peduto administration would review any "good faith efforts" to improve public safety and well-being. He said the city's Bureau of Police has received information requests from the coalition but that it has not otherwise interacted with the administration.

McNulty added that the administration is working to reimagine — though not to reduce — policing at a time when local efforts to emphasize social services coincide with a nationwide increase in crime. "There is not a single Pittsburgh neighborhood asking for a smaller police presence," he wrote.

The coalition disagrees, citing protests calling for the police to be defunded and for reduced police presence in communities of color.

"We've been spending the past year to six months calling for the police to be defunded and these resources to be brought into our community," said Jasiri X.

Fisher said the coalition is hopeful that the report's recommendations will be able to be implemented in some capacity, intends to keep pushing for change, and understands that there is going to be pushback by people in power.

“Pushback doesn't mean that what we are pushing for is wrong,” said Fisher. “It means the exact opposite.”

*PublicSource receives funding from The Pittsburgh Foundation and the Staunton Farm Foundation.

Danielle Cruz was a PublicSource editorial intern for the spring semester. She can be reached at danielle@publicsource.org.