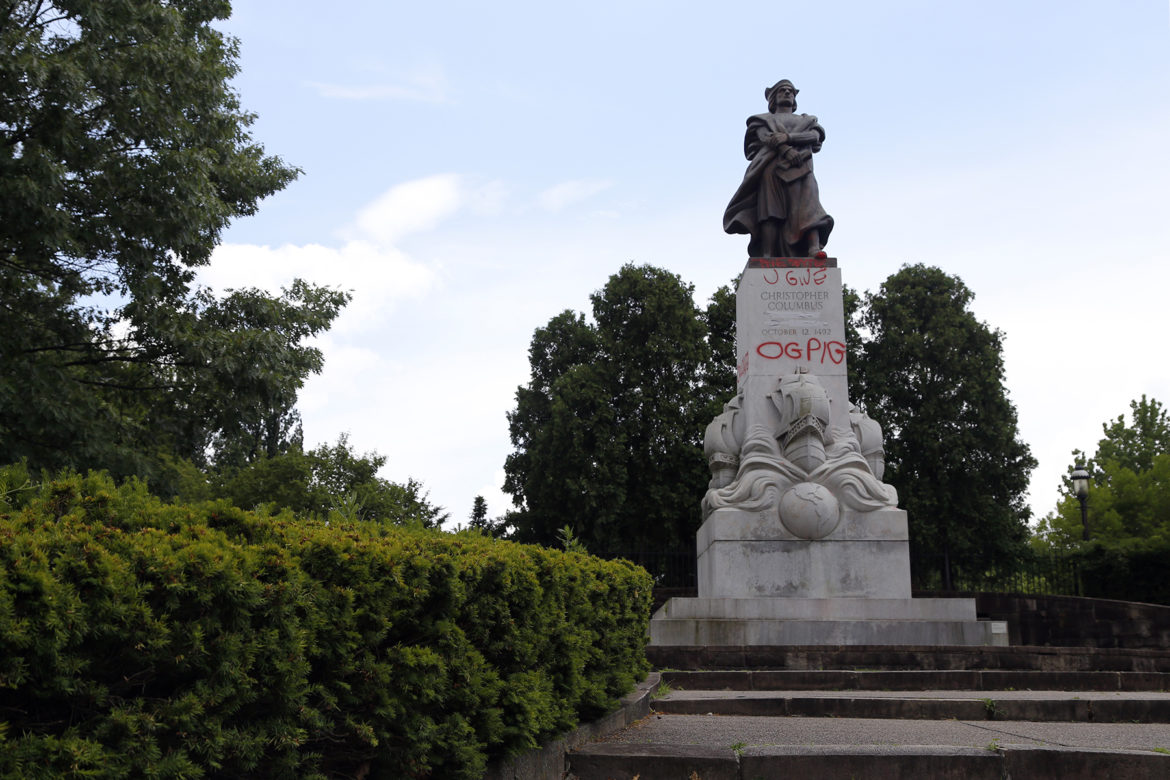 More than 300 Pittsburgh residents reached out to the Art Commission at or before a virtual meeting Wednesday to discuss the controversial Christopher Columbus statue in Schenley Park and calls for its removal.

And, after three hours and disagreement over whether the six-member commission or Mayor Bill Peduto had the final call on the statue’s fate, the commissioners voted unanimously to hold a public hearing on the statue’s future on a future date to be determined.

For some people, Christopher Columbus is a figure who represents Italian pride and the promise of a better life in America. For others, however, the man and his likeness in the form of a statue in Schenley Park ignore his violence toward Indigenous populations and sugarcoat a racist legacy.

“This is not about cancel culture; this is about bettering our community,” Rachel Williams, a Pittsburgh resident, said. “We have an opportunity to recognize the pain and the suffering of the Taíno people at the hands of Columbus. We have an opportunity to join Philadelphia in recognizing that the Columbus statue is a problematic and outdated symbol of American pride.”

Either through citizen efforts or local government decrees, Christopher Columbus statues have been coming down in areas throughout the United States.

In Pittsburgh, following a summer of protests, a petition with roughly 14,000 signatures in favor of the statue's removal and years of criticism, the city’s Art Commission convened to discuss the matter and allow the public to weigh in.

While 27 residents appeared on video to testify at the meeting, the commission reported that it had received 162 emails in favor of keeping the city-owned statue and 132 calling for its removal as of noon Tuesday.

Who has the power to decide?

Rivaling the public’s debate on the statue’s appropriateness is a disagreement over who holds the authority to decide on not only the Columbus statue but also city art in general.

According to a letter to Peduto from Art Commission Chair Robert Indovina on Aug. 3, the commission feels the city’s bylaws give them the power to decide if city art is removed or relocated. Peduto wrote in a public statement: “I wish to turn to the Art

Commission, as my art advisory body, to make a recommendation about how I should proceed."

In hopes of clearing up the confusion, Assistant City Solicitor Lorraine Mackler attended the meeting. It became a tense conversation, and her comments appeared to have left the commission with more questions than answers.

Members of the commission were concerned that Mackler’s interpretation of the bylaws rendered them powerless. Commissioners cited their vote to remove the Stephen Foster statue as a precedent for their decision-making ability. Mackler interjected, saying that the mayor was simply asking for their assistance on the complex issue of the Columbus statue.

“The city’s interpretation is that the Art Commission is linked to the mayor and is the mayor’s art advisory group,” Mackler said.

“The way we understand it now is that the mayor must make a decision and then refer a decision to the commission for ratification,” Mackler explained. “It seems unlikely having asked for your recommendation he would disregard it. If he makes a decision you are not happy with, you can reject.”

Commissioner Kilolo Luckett rejected that description of the commission and raised questions about accountability.

“You are making things up here,” Luckett said. “This is misleading.”

Indovina questioned if other commissions within the city had similar limits.

Mayoral spokesman Tim McNulty wrote in an email to PublicSource during the meeting that the commission “has the ultimate decision-making power.”

He continued: “[B]ut typically they ask for direction from the Mayor ... It's exactly the same as their deliberations on the Foster statue a couple years back.”

The testimony given about whether the Columbus statue should stay or go was similarly tense.

From the perspective of residents who feel removing the statue is a long-overdue move, the consensus was that allowing the statue to stay condones Columbus’s actions, spreads misinformation about the kind of man he was, and disrespects the suffering of Native people.

Leah Humms, a local social studies teacher, testified that kids would actually learn less as opposed to more from the statue’s presence.

“I cannot for the life of me understand what my students would actually learn by looking at it,” Humms asserted. “To start, it shows Columbus in a very heroic stance and making them think that this was a man that lived a great life and that they should emulate somebody like him in any way.”

From theft to committing sexual violence, Humms added that Columbus represents the antithesis of the values society should aim to teach children. She said her students were often “appalled” when they learned the truth about Columbus.

Speakers in favor of keeping the statue hold a much different view. Basil Russo, president of the Italian Sons and Daughters of America, testified that his organization stands firmly for preserving both Columbus Day and statues of Columbus around the country. Furthermore, he said individuals that associate Columbus with genocide and colonizing are misinformed.

“Today you’ve heard slavery, genocide and hostility used to describe Columbus,” Russo said “None of these allegations are based on primary source material.”

“Up until a few years ago, Columbus was a symbol of inclusion who initiated 500 years of immigration..."

Russo added that in the 1920s, the Ku Klux Klan attacked Columbus as a figure because Columbus "wasn't a bigot.” Ultimately, Russo argued that Columbus was an important figure in American history.

“Up until a few years ago, Columbus was a symbol of inclusion who initiated 500 years of immigration from people throughout the world seeking a better life for their families,” Russo said. “That is what we believe Columbus Day and Columbus statues stand for and that’s the legacy that we are fighting to preserve.”

Some in favor of keeping the statue did acknowledge Columbus’s checkered history. Ed Kress compared Columbus to the likes of Alexander the Great and believes that Columbus’s actions should be viewed in their historical context and that Columbus is ultimately a “great person” who earned a place in history.

“When I look at the statue it’s a beautiful piece of artwork and a symbol that needs to stand,” he said. “As a country that has many different ethnic groups and religions, I think we have to show some tolerance of many different people’s backgrounds.”

"...we're asking if it’s fair for that murderer to be on a pedestal.”

Although many speakers in favor of the statue's removal condemned Columbus as a “genocidal maniac,” some such as Miguel Sague, himself a descendent of the Taíno, stated that he wasn’t without sympathy for the xenophobia that Italian-American immigrants experienced. Yet, he recalled feeling hurt by the statue’s presence as a child.

“I walked past the Columbus statue because I’m from Pittsburgh and I would walk with my parents and ask why a man like that would be on the statue and they would tell me life wasn’t fair,” Sague explained. “Well now we're asking if it’s fair for that murderer to be on a pedestal.”

He believes a way to honor the suffering of Italian-American immigrants and Indigenous populations Columbus harmed would be to erect a statue of a different, “heroic” Italian-American figure from Pittsburgh’s own history.

“They were suffering, too, in a lot of the same ways the Latinos are suffering now, so I do think there should be an Italian there,” he said. “But there are heroic Italians from this city. We have so many options. I’d like to give the opportunity to Italians to find a better spokesperson.”