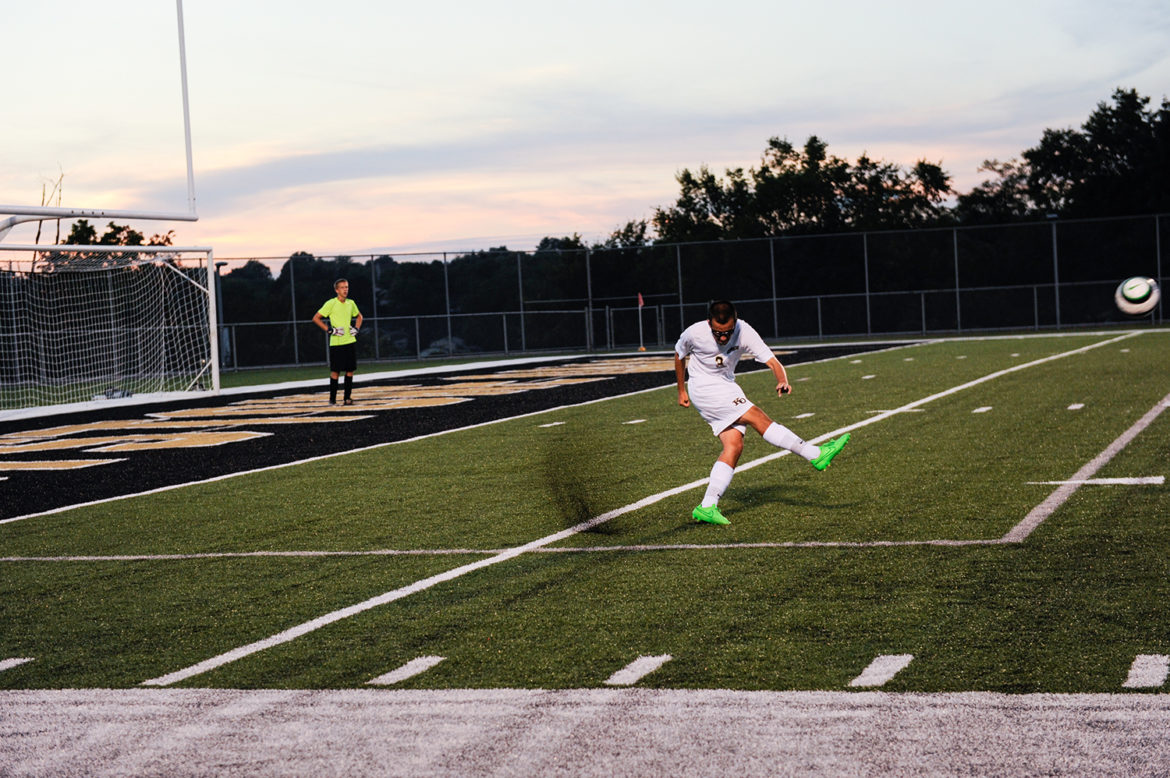 Dominic Kimmerle dives and slides across the field. Anything to prevent the other team from scoring against his Golden Eagles. He stops the soccer ball. He kicks it back to his teammates. Black pellets spray from the goalie’s cleats.

The pellets stick to his skin and clothes. When he changes from his Keystone Oaks uniform, they scatter to the floor.

Lately, those tiny rubber bits are getting big attention.

A federal inquiry into the safety of what’s called ‘crumb rubber’ launched in February because of concerns that the product may be endangering the health of young athletes.

What could be wrong with crumb rubber? Crumb rubber is made up of old tires. It’s been used as infill for artificial turf fields for decades. It cushions the turf, softening falls. It was seen as an alternative to burning tires, which emits carcinogens.

Instead it’s fragmented and poured over fake shards of grass, where under the burning sun it can simmer and cause a stench. People living near a Mt. Lebanon community field complained about the smell in their neighborhood. Dominic's mother, Jennifer Kimmerle, also talked about "that awful rubber smell” on hot days.

The pellets saturate school and community athletic fields throughout the region and about 11,000 fields nationwide.

Crumb rubber turf already existed at some local school district properties. Fox Chapel has three other crumb rubber fields at its high school, and Bethel Park has two more in addition to what was just installed. Pittsburgh Public Schools has one crumb rubber field at Cupples Stadium on the South Side and a district spokeswoman said some play areas may also have it.

The concerns that prompted the federal study arise largely from a list of about 200 young athletes — mostly soccer goalies — who have been diagnosed with Hodgkin’s lymphoma after playing for years on crumb rubber fields.

A preliminary report from the feds is scheduled to be completed later this year.

The federal probe to study the health questions about crumb rubber is a joint action plan represented by U.S. Environmental Protection Agency [EPA], the Centers for Disease Control and Prevention and the U.S. Consumer Product Safety Commission. It came as a result of two U.S. senators asking President Barack Obama in January to push for a comprehensive look at the health risks.

Jennifer Kimmerle, is aware of the federal probe and worries for her son’s health. But she said there is no way for her son to get away from the rubber crumbs if he’s going to play soccer.

“When they play for school, it’s always on turf,” she said. “You can see (the rubber crumbs) when they run. There is black dust behind their feet.” 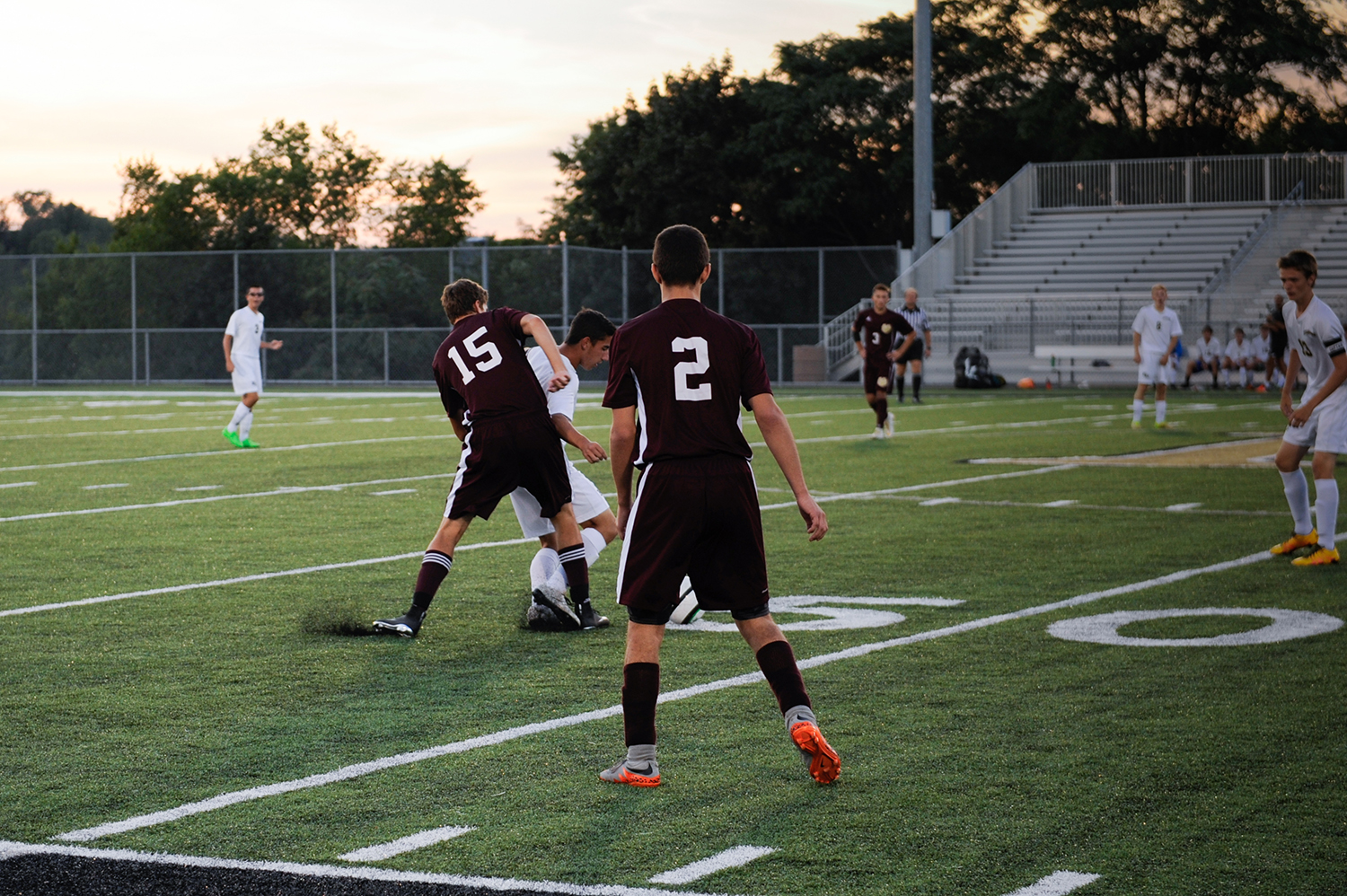 As soccer players fight for the ball at the Keystone Oaks High School field, clouds of black pellets trail their cleats. (Photo by Sarah Collins/PublicSource) 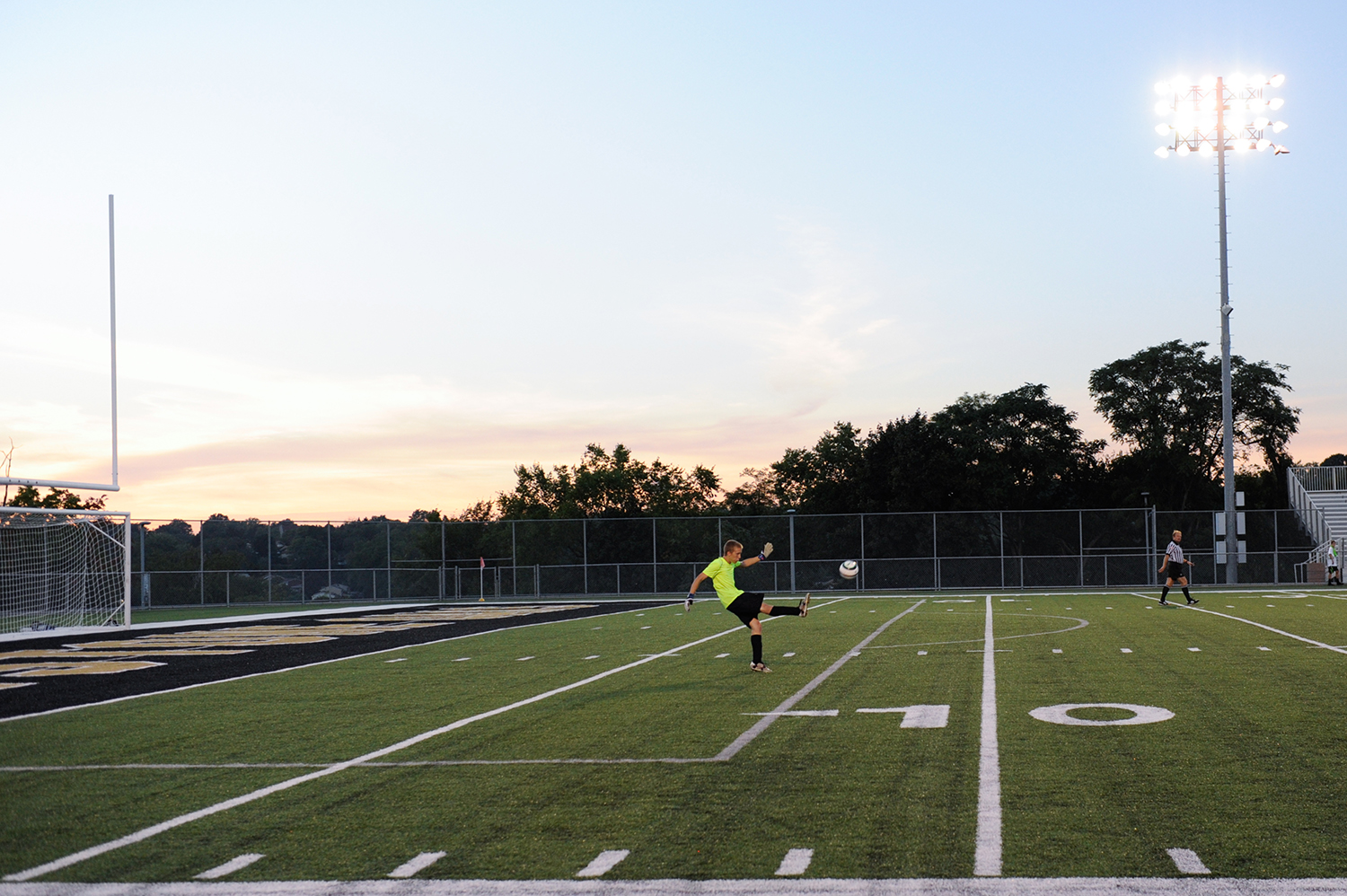 Keystone Oaks’ goalie Dominic Kimmerle, 15, is covered in the rubber pellets when he comes home from soccer games and practice, his mother says. (Photo by Sarah Collins/PublicSource) 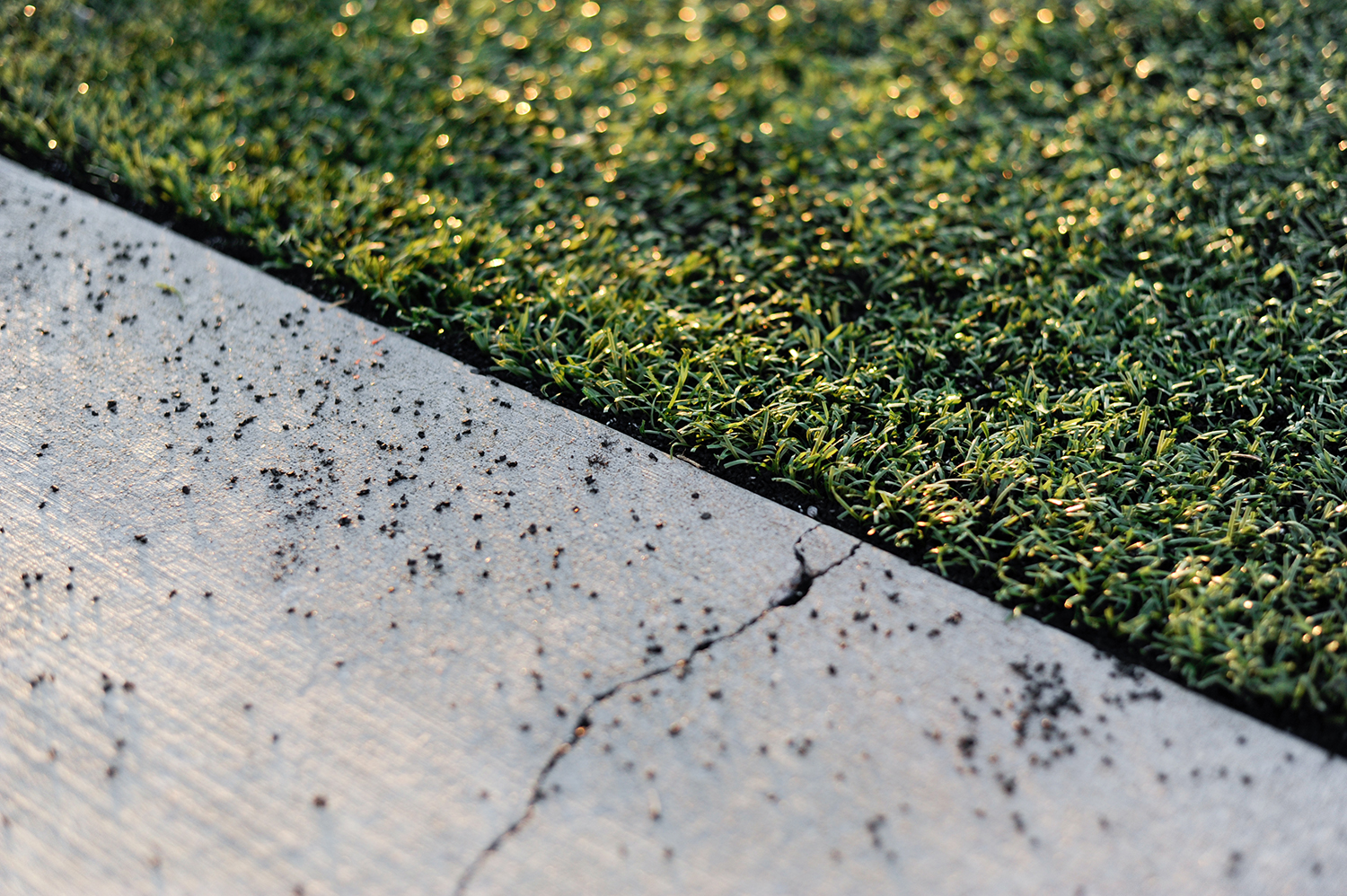 Rubber pellets tracked out of the field. (Photo by Sarah Collins/PublicSource) 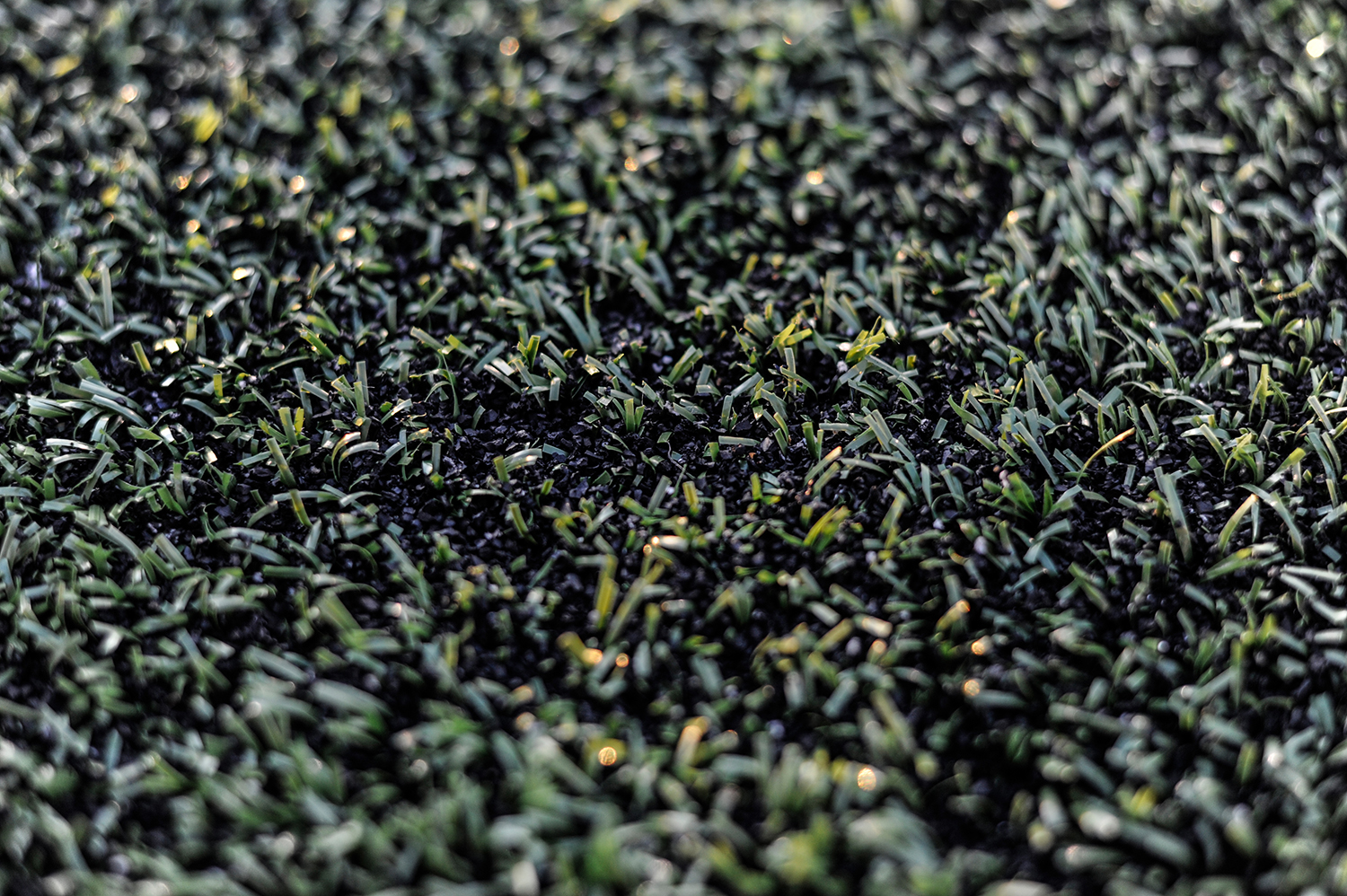 The rubber pellets in the turf look to outnumber the blades of artificial grass. (Photo by Sarah Collins/PublicSource)

Officials in Keystone Oaks, Bethel Park, Upper St. Clair and Fox Chapel said no one in their communities expressed health concerns about the recent installation of crumb rubber turf.

Matt Mellinger, in his position as Upper St. Clair Athletic Director, said in a Sept. 8 email that he has “received great reviews from the community and teams that use the stadium.” The high school fired Mellinger on Sept. 21 for reasons that have not been made clear to the public.

North Allegheny Athletic Director Bob Bozzuto said he reviewed the available information on crumb rubber along with the district’s landscape architect and decided there is no real health threat from the crumb rubber.

“I’ve been here for 28 years and I can tell you that argument has been used year after year and there is nothing to it,” Bozzuto said.

But in the Chartiers Valley School District, concerns about the health effects of crumb rubber prompted the board there to choose “virgin” rubber pellets for the infill in its new field. Virgin  rubber has never been used in tires and does not contain the chemicals in tire rubber, said Superintendent Brian White.

White said a resident brought concerns about crumb rubber to his attention and he shared those concerns with the board. As a result, the board watched an ESPN video about anecdotal links between crumb rubber and cancer.

The board then decided it would be wise to look into alternatives.

When initial proposals came in around $265,000 in addition to the $389,400 base cost for the field, the board was hesitant about going with an alternative. But when a $16,000 proposal came, they readily voted in favor of the alternate rubber.

Similar deliberations took place in the Shaler school district, where the board chose to pay $55,502 extra, for a total cost of $429,314, to install a field with cryogenic rubber fill at its Titan Stadium, said spokeswoman Bethany Baker. The first football game will be played at the stadium tomorrow night.

Cryogenic pellets, according to the website of the firm FieldTurf, are “the cleanest, highest grade of rubber granule” made from ground-up recycled tires that are “cryogenically frozen then shattered into small, smooth-edged particles.”

“You always want to do what’s best for the students and the community when you are installing something new,” Baker said. “I know our board and administration spent a lot of time doing their due diligence to make sure the product that was approved was the best product for our district.”

Are these substitutes truly safe? Hard to say. There is little to no evidence on the safety of alternative rubbers or organic fill substitutes, such as cork or coconut husks.

Pittsburgh-area schools have spent a lot on crumb rubber

Some residents and Commissioner Kelly Fraasch raised health concerns about installing crumb rubber turf at the Wildcat and Middle fields along Cedar Boulevard.

The majority of the commission, however, voted in favor of installing the turf, and it was installed in summer 2015. The fields are used by community soccer leagues as well as the high school baseball and lacrosse teams.

“I wanted to wait to research alternatives,” Fraasch said. “But there was a movement among the majority of the commission to get this done.”

The commission, at the urging of community sports leagues, planned the switch from grass to turf so that the field use could be increased.  After it rains, drainage and mud on grass fields create problems. Repeated use also wears down a grass field faster, said David Donnellan, director of recreation for Mt. Lebanon.

In response to the concerns, the municipality sent a sample of each bag of crumb rubber pellets that were ordered to be used at the fields for testing at a private laboratory to see if the level of chemicals met EPA standards.

“They met the EPA standards for the chemicals in the pellets at the time,” Donnellan said. “If new information becomes available down the road we will rethink what we are doing.”

Could chemicals from recycled tire rubber enter through nasal passages and wounds and cause health problems for young athletes?

Critics of the crumb rubber product believe it could. But at this point the evidence is anecdotal, and there are no definitive studies that prove or disprove any connection between crumb rubber and cancer or other illnesses.

The recycling of tires into pellets for cushioning in turf was an effort that was initially promoted by the EPA as an effective way of reusing tire rubber, said Nancy Alderman, president of Connecticut-based Environment and Human Health, Inc.

“But they didn’t study them first. They didn’t analyze the material,” said Alderman, who is referred to by the Synthetic Turf Council as the “primary antagonist” in “false claims” that crumb rubber is unsafe.

Her organization has pushed for analysis of the chemicals in crumb rubber and its possible health effects since 2006 when parents around Greenwich, Conn., contacted her organization about concerns they had about the rubber pellets on their children’s playing fields.

“When they play for school, it’s always on turf. You can see (the rubber crumbs) when they run. There is black dust behind their feet.”

That was several years before University of Washington Associate Soccer Coach Amy Griffin started to keep her list of athletes who became ill after playing on crumb rubber fields.

Griffin initially noticed that a handful of goalies she knew were diagnosed with Hodgkin's lymphoma. She started asking around and the list of players, mostly goalies, diagnosed with lymphoma or leukemia grew. After she took it to the media, other players contacted her to tell of their diagnoses.

Those, like Alderman, who believe there is a connection between the rubber pellets and cancer say goalies would be particularly at risk because of the amount of time they spent diving into the turf.

Environmental toxicologist Dr. Bernard Goldstein said he understands why the EPA would launch a study on the crumb rubber pellets.

Given the anecdotal evidence and that children are involved, “it's appropriate for them to decide they are going to use resources to do this,” said Goldstein, a former assistant administrator for the EPA research and development.

“Sometimes there is a real relationship, and it shows up first as a cluster. Unless you do the epidemiological studies, we just don’t know,” Goldstein said, adding that such clusters can occur in nature without a common cause.

It’s far too early to assume any connection between crumb rubber and lymphoma, he said. As a hematologist who has studied lymphoma, Goldstein said he doesn’t know of any compounds being released by crumb rubber that are known to cause the cancer.

“I think the chance that this will turn out to be something is very small, but it’s not zero,” he said.

The Synthetic Turf Council has a video on its website supporting the safety of crumb rubber.

Back at the Keystone Oaks soccer field, Jason Lykens of Castle Shannon looked on at his 14-year-old son, Nicholas, playing forward amid the questionable black dust.

“Can you imagine if they do find a problem?” he asks, referring to the federal inquiry. “It will be a huge problem.  Everyone will have to change their fields because everyone is using it.”

In the meantime, athletes don’t have to recuse themselves from the turf, said Goldstein, former dean of the University of Pittsburgh Graduate School of Public Health.

“But it is wise to take off athletic gear and shower right away,” he said. “There are certain kinds of preventive approaches which come at no cost. That’s one of them. Wipe off, go ahead.”