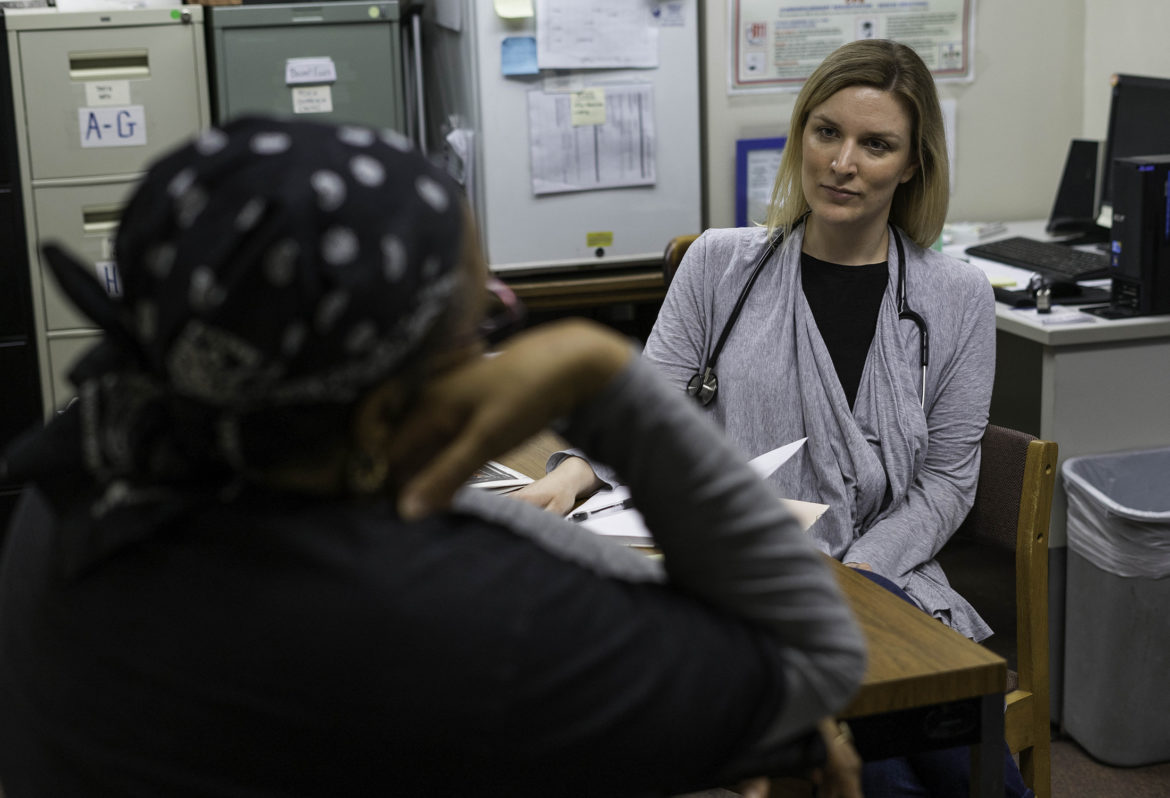 Katie Leslie, a health outreach nurse for the Community Human Services Corporation, meets with patient Michele Henry, 60, on Friday, Feb. 24, 2017. Leslie worries about what may happen to her patients if the Affordable Care Act is repealed. (Photo by Aaron Warnick/PublicSource)

Katie Leslie vividly remembers a patient who was diagnosed with colon cancer. The cancer was already in an advanced stage.

He had no health insurance. She helped him to apply for Medicaid. As he got sicker, he kept waiting for a response. Finally, he got approved. But it was too late. By the time he could get treated, his outlook was bleak. He passed away.

Leslie, a health outreach nurse for the Community Human Services Corporation, thinks about him often. She thinks if he had insurance earlier, he may have sought preventative care, and that could have saved his life.

Now she worries about another patient of hers. He has diabetes, hypertension and a congenital kidney disease. His income is unpredictable, so he has trouble affording even the meager $1 to $5 copays for his blood pressure medicine.

“Even with insurance, he rations his medicine. I can help voucher the money for his copay, but there’s still a lot of pride that keeps [him] from asking for help,” Leslie said.

Most of the clients she sees are living on low incomes and are uninsured or underinsured. Leslie and others who work at the Oakland nurse-based community clinic, the CHS Health Station, serve as a resource to clients for their healthcare needs, insurance or referrals.

As Congress frantically moves toward repealing the Affordable Care Act [ACA], widely known as Obamacare, the health care of Leslie’s patients and others like them is at stake. Directors of area community health centers are expecting their funding to be cut and that they’ll have to turn patients away and cut health services.

While most local health centers foresee deficits, there is at least one bracing for an influx of uninsured patients.  Its leadership plans to hire more nurses and market the center. Most of the clients Katie Leslie sees are living on low incomes and are uninsured or underinsured. (Photo by Aaron Warnick/PublicSource)

Community health centers are community-based organizations meant to provide affordable and quality care for uninsured or underinsured people, regardless of income. There are 23 federally qualified health centers in Allegheny County that provide health care for medically underserved populations.

The ACA provided additional funding to community health centers by establishing an $11 billion trust fund to support the growth and development of new health centers around the country. It also gave an additional $1.5 billion to the National Health Service Corps to help recruit clinical staff for the health centers.

The act that keeps that funding going expires in September, according to Cheri Rinehart, president and CEO of the Pennsylvania Association of Community Health Centers. If Congress doesn't reauthorize the act by Sept. 30, health centers could lose as much as 70 percent of their funding.

“[Health centers] are the only place in the healthcare system that provide care to all people,” Rinehart said. “[They] are on the front lines. We were helping with HIV, and now we have become part of the solution.”

Predicting the effect of an ACA repeal

In a vote on Jan. 12, the Republican-led Congress set the stage to repeal the ACA and begin the replacement process over the next two to three years. If the ACA is not immediately replaced, 18 million people could potentially lose their insurance — including up to 956,000 residents in Pennsylvania.

Because of the ACA, community health centers were able to serve more patients and expand their services. Susan Friedberg Kalson, CEO of the Squirrel Hill Health Center, said the funding allowed her to open another clinic in Brentwood. Many refugees who resettle in South Hills’ suburbs, are patients of the center, and Brentwood is more accessible location for them.

In 2009, half of the Squirrel Hill Health Center’s patients were uninsured and it was costly for the center. The number of patients on Medicaid doubled from 30 percent to 60 percent since the ACA. In 2016, they served about 6,000 patients in about 25,000 in-person visits — a 25 percent increase over the previous year.

“My hope is that the elements that helped our patients will remain and that the Medicaid expansion will continue to be safeguards for our patients,” Kalson said. “We may have to turn away 1,500 patients and cut the behavioral services program if funding changes.” According to the Allegheny County Health Department, 93 percent of adults (18 to 64) living in the county had health insurance coverage in 2015, up from 88 percent in 2010, when the ACA was enacted.

The Pennsylvania Association of Community Health Centers reported that 45,707 patients visited health centers in Allegheny County last year, with 7,995 people who were uninsured.

With the potential repeal, Hopkins is expecting thousands of community members to come back to the health centers. There are 10 PCHS locations in the Pittsburgh area that he oversees.

“We are developing a marketing and outreach program to prepare for the increase of patients using our services,” Hopkins said.

He is also preparing to hire more nurse practitioners and physician’s assistants to accommodate the higher demand. They may also begin to allow walk-ins.

Despite the increase in insured patients, high premiums and deductibles deterred many patients from signing up for the ACA, with some patients choosing to pay the penalty fee rather than the premiums.

Pittsburgh Mercy, a certified community behavioral health center, has served many patients who did not benefit from the ACA exchanges.

“People were so poor they could not afford to pay for these deductibles,” Pittsburgh Mercy COO Raymond L. Wolfe said. “If someone making $11,000 a year has a $3,000 deductible, that’s almost 30 percent of their income. They would practically be uninsured.” Rev. Mark K. Richardson, 59, of Churchill, joined the board of the East Liberty Family Health Care Center in July 2015. He has been a patient at the Christian-based health center since 1997. (Photo by Guy Wathen/PublicSource)

He receives UPMC health insurance through the church, but last year the church changed his care and his premium costs went up from $1,100 to $1,400.

For most of the health centers, the Medicaid expansion proved to be the most beneficial part of the controversial law, allowing thousands of low-income people to gain affordable health coverage.

Pennsylvania was one of 32 states that adopted the Medicaid expansion in 2015. As a result, 58,497 people in Allegheny County were covered by January 2017.

Since Medicaid is the single largest payer for mental health services in the United States, the Medicaid expansion was a critical component to expanding access to mental health treatment and substance abuse disorders.

Medicaid also opened up treatment for substance abuse disorders — most notably for heroin abuse. In Allegheny County, the heroin epidemic has increased exponentially with 2,593 reported overdose deaths within the past eight years.

“If [the Affordable Care Act is] repealed, the opioid problem will grow faster and hurt people’s ability to find treatment for it,” Wolfe of Pittsburgh Mercy said.

State Rep. Dan Frankel, a Democrat in Allegheny County, predicts that Congress may take two to four years to implement a replacement for the ACA. If this replacement cuts the Medicaid expansion, the state would either have to increase appropriations — which would deepen Pennsylvania’s $600 million state budget deficit — or the state would have to cut the amount of people eligible for Medicaid, along with the scope of the benefits the program provides.

“If [the Affordable Care Act is] repealed, the opioid problem will grow faster and hurt people’s ability to find treatment for it.”

Ted Dallas, Secretary of Department of Human Services, said he believes there’s no chance Pennsylvania could afford to cover the costs of federal funds to make up for these programs.

The most pressing concern of Neil Capretto, medical director for the Gateway Rehabilitation Center, is that people will resort to acute care instead of preventative care. If patients don’t have access to treatment, those same people will end up in the emergency room, in jail or in the streets.

“It’s the humane thing to do,” Capretto said. “I’ve seen lots of people suffer from addiction, but I’ve also seen lots of people recover and be able to maintain jobs, pay taxes, enrich their families and give back to the community to help others with addiction. They are some of the best people I know.”