President and CEO of Peoples Natural Gas Morgan O’Brien has a grand plan for the Pittsburgh Water and Sewer Authority. And, in spite of skepticism from some officials and recent opposition from local activists, he wants you to trust him.

O’Brien revealed his plans publicly on Tuesday to form a public-private partnership that would take control of PWSA’s water infrastructure, allowing Peoples to replace and own water pipes, build a new water treatment plant and handle billing for customers. 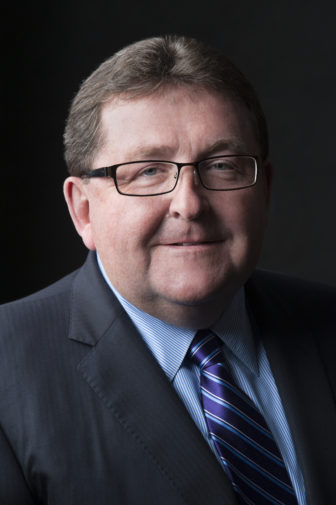 And he’s tailored his plan to some of Mayor Bill Peduto’s requests for sustainability and transparency, he said, so that he can win him and other Pittsburgh officials over.

According to O’Brien, the Peoples Water entity would be “in the middle” between a publicly owned water system and a privately owned one and would allow Peoples to invest in the water system while the public maintains accountability.

“Ours is a middle ground that says we think a partnership is the best path forward and you’re partnering with somebody who people can trust,” O’Brien said.

“This is the future for water in this region,” he said. “This is green. It's clean. It's why people want to come to Pittsburgh.”

O’Brien said the business case for Peoples’ plan is simple: Fixing PWSA’s problems boosts Peoples’ business. He said he couldn’t specify what the company would earn from water bills after it made its initial investment.

In order for Peoples’ plan to become a reality, it would have to win approval from PWSA’s board of directors, city council and the Pennsylvania Utilities Commission.

While O’Brien said he’s confident in his plan, he expects to face some opposition. PWSA officials have said they want to keep the water authority public. Robert Weimar, PWSA’s executive director, said on Tuesday that PWSA is able to manage itself without private involvement. As examples of progress the authority has made, he cited PWSA’s lead-line replacements — it surpassed a state mandate to replace 1,341 of them last week — and the hiring of Julie Quigley, who is helping to fix PWSA’s billing issues.

“I personally believe we can operate as a public entity,” Weimar said, adding that he believes PWSA’s problems “will be a thing of the past.” 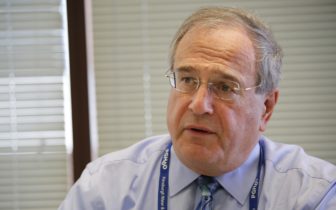 Robert Weimar, the interim director of the Pittsburgh Water and Sewer Authority. (Photo by Ryan Loew/PublicSource)

PWSA is currently under oversight by the Pennsylvania Public Utility Commission and the state Department of Environmental Protection. The DEP recently granted PWSA approval to add orthophosphates to its water, which will coat lead pipes and help remove the neurotoxin from water. Weimar said he hopes to have the orthophosphates introduced by fall.

O’Brien is also aware he’s going to face opposition from activists, some of whom have already begun protesting his plan. In June, Pittsburgh United’s Our Water Campaign held a press conference and demonstration outside of Peoples’ headquarters and called on PWSA to remain a public entity. O’Brien said he’s ready.

“We're going to be out and people are going to protest, they're going to throw rocks at us,” he said. “But the reality is if if you aren't willing to take that chance...You can't get things to change.”

O’Brien said he’s going to try, however, to win over Pittsburgh to his plan. That includes hosting public meetings and continuing to meet with city council members, PWSA officials and Peduto. First, though, he has to “win over the people of Pittsburgh.”

O’Brien’s vision includes regionalizing water in Allegheny County, an idea he says he got from Allegheny County Executive Rich Fitzgerald. That means the Peoples Water entity would partner with other water providers in the towns and boroughs around Pittsburgh and bring them into the same system. But, he says, his plan depends on how many municipalities want to partner with Peoples.

“At the end of the day, if we go out to all these public meetings and everybody says to us we're not interested in this, I won't be the confident guy you met today,” he said. “If we have no partners in this deal, we're not doing this deal.”

In many ways, O’Brien tailored his proposal to meet Peduto’s demands. Tim McNulty, a spokesperson for Peduto, said the mayor has been consistent in his opposition to privatization, which is partly why O’Brien proposed a public-private partnership.

“If we have no partners in this deal, we're not doing this deal.”

O’Brien also made sure his proposal would line up with Peduto’s goals to fight climate change and cited the mayor’s One Pittsburgh strategic plan as the basis for some of his ideas. Peduto released his One Pittsburgh plan for making the city “resilient” last March.

The water treatment plant being powered by hydroelectricity aligns with the plan, as does the promise to hire union workers and people of color, O’Brien said.

“We took his One Pittsburgh vision and said, ‘How can we embrace that vision?’” O’Brien said.

Peduto also urged him to be transparent about his plans, O’Brien said.

McNulty said on Tuesday that the mayor remains committed to keeping PWSA publicly owned but left the door open to private involvement in PWSA in the future.

"The mayor remains focused on PWSA's lead-line replacements, introduction of orthophosphates and its long-term strategic planning to transform itself into a leading, publicly-owned water provider,” McNulty wrote in an email. “He expects the authority's infrastructure needs to be great, and once they are spelled out he would welcome any company to submit plans to help address those needs.” 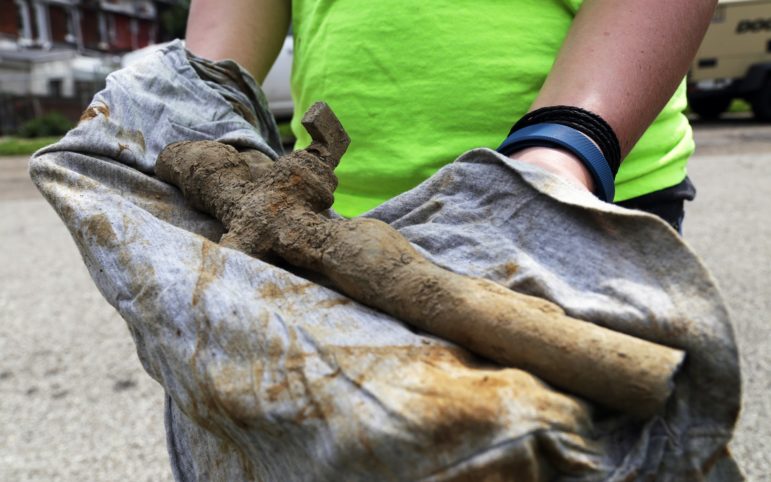 Manda Metzger, a project manager with PWSA, holds a portion of a removed lead service line in 2017. (Photo by Ryan Loew/PublicSource)

O’Brien and Peoples launched an aggressive public information campaign this week, complete with media interviews, a website touting the proposal and a video of O’Brien explaining his idea. Peoples also distributed a video rendering of what the new water treatment plant would look like.

O’Brien said he’s already received interest from one municipality outside the city. According to O’Brien and city emails obtained by PublicSource, O’Brien has been talking with Peduto and his staff, including his former chief of staff Kevin Acklin, about overhauling PWSA since September 2016. Those talks included the city sharing PWSA’s financial information with Peoples and the company asking the city to sign a non-disclosure agreement. Acklin, who now works for Peoples and still serves on the Urban Redevelopment Authority’s board, wrote in an email Tuesday that the gas company was one of more than a dozen companies to approach the city about PWSA. Acklin said the NDA was never signed.

O’Brien said he submitted a proposal to Peduto back in 2016 to take over PWSA. That, combined with the interest from other companies, caused Peduto to empanel the Blue Ribbon Panel in 2017. The Blue Ribbon Panel reviewed Peoples proposal, O’Brien said. Pittsburgh City Council is currently trying to establish a new governing structure for PWSA based on the panel’s recommendations.

Ultimately, O’Brien said, his goal is to gain the public’s trust.

“A key part to any partnership is having people you trust, right?” he said. “No matter what the partnership agreement says, no matter what lawyers negotiate at the end of the day — do people trust each other? Those are the best partnerships.”