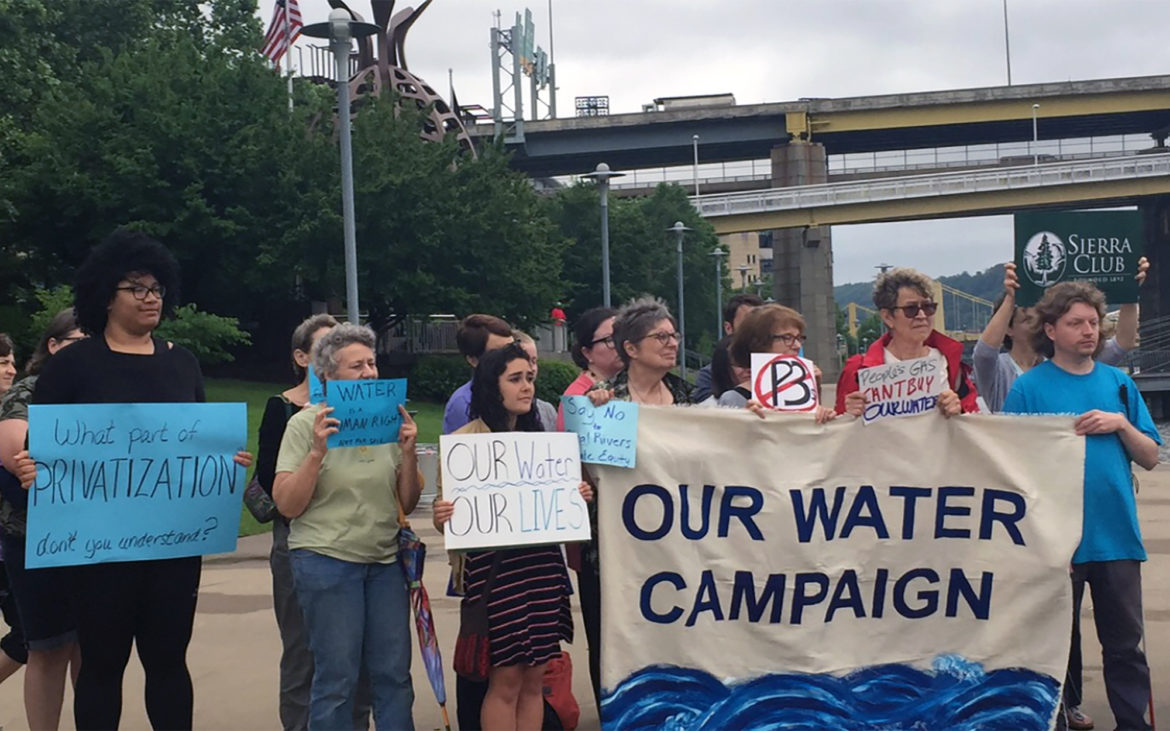 About two dozen activists gathered in front of Peoples Natural Gas headquarters on the North Shore to oppose the company's effort to take ownership of parts of the Pittsburgh Water and Sewer Authority. (Photo by J. Dale Shoemaker/PublicSource)

About two dozen activists, public officials and onlookers gathered in front of the Peoples Natural Gas headquarters on the North Side Wednesday morning to oppose the company’s efforts to, as they say, "privatize the city’s water infrastructure."

Holding signs, attendees engaged in a call-and-response with Rev. Vincent Kolb, a member of the Pittsburgh United’s Our Water Campaign and a minister at the Sixth Presbyterian Church.

“Do we want to see our water become a commodity?” Kolb asked as the protesters stood behind him.

“No!” the crowd responded.

During the event, a few officials gave short speeches and the Our Water Campaign launched a petition drive to gather support for keeping PWSA’s assets public.

Peoples refutes the notion that its plans amount to privatizing PWSA. In an email on Wednesday, Peoples’ spokesperson Barry Kukovich said the company met with members of the Our Water Campaign and listened to their concerns.

“We remain open to their concerns and opinions and are very willing to continue to listen to them over the next several weeks and months,” Kukovich wrote. “I can say again that we do not wish to privatize PWSA, but we are genuinely seeking to develop a public-private partnership.”

In an effort led by Morgan O’Brien, Peoples’ CEO and president, and Kevin Acklin, a company executive and Mayor Bill Peduto’s former chief of staff, Peoples has been pushing to take ownership of PWSA’s infrastructure over time, promising to fix many of the authority’s problems in the meantime. While the company hasn’t released a copy of its plans yet, activists and PWSA executives have shared some of the details they've learned from meetings with O’Brien and Acklin. O’Brien and other Peoples executives have met with members of city council, but Acklin has said he couldn’t attend those meetings because it would violate city ethics rules. Some of the details of Peoples’ plan, as recounted by people in those meetings, include:

According to activists and PWSA officials present at the meetings with representatives from Peoples in the past two weeks, the company has also proposed making the city’s water infrastructure more environmentally friendly and has said it will support union and minority jobs when it builds its water treatment facility.

Aly Shaw, an organizer with the Our Water Campaign, and Paul Leger, a PWSA official, said the company has proposed establishing a new entity, possibly a nonprofit, that would oversee the new water treatment plant and the water lines it replaces, keeping track of how much that work costs. Shaw and Leger said Peoples talked about giving the city the option to buy back the new infrastructure — which could cost $10 billion — after its lease is up and offered to pay off PWSA’s debt, which is currently $1 billion. 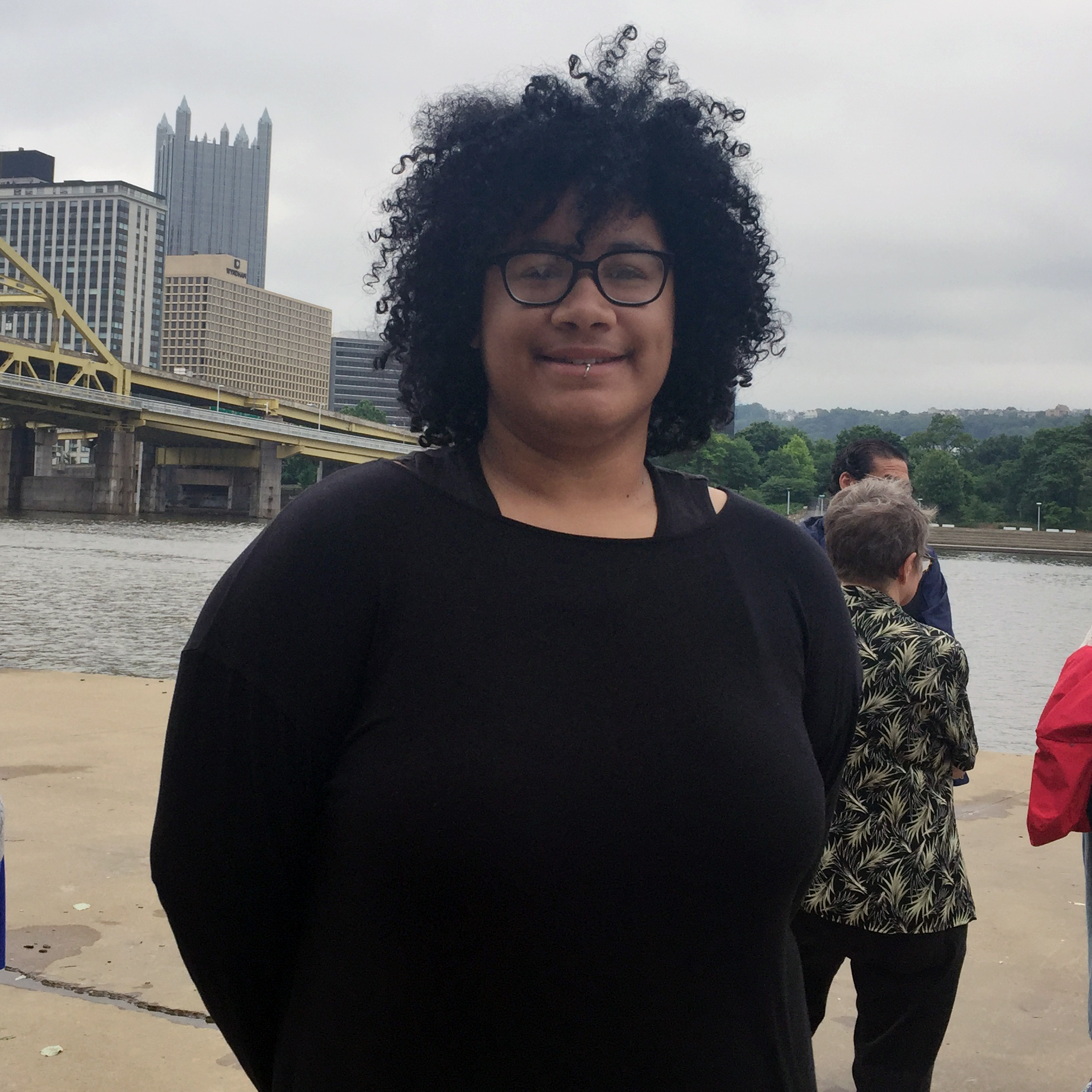 But some activists fear the public wouldn’t be able to hold the company accountable if it made changes they didn’t like. Jamilah Lahijuddin, who held a sign reading, “What part of privatization don’t you understand?” said even though Peoples was promising to freeze rates, it could raise them in the future.

“How long will [the freeze] last? That's the question. They may last two, three, four, five years, maybe 10, but after 10 years, what does that mean for the city of Pittsburgh? They have free reign to do what they want at that point,” said Lahijuddin, a program coordinator for the Hill District Consensus Group.

Billie Vaughn, a Hilltop resident and housing advocate, said that once Peoples owns PWSA’s infrastructure it can do what it wants. She said she was against privatization because the city is still recovering from the damage Veolia did when it managed PWSA.

"For real, it's like a slap in the face that we already allowed a private company to destroy our water and now we're paying for it to be fixed and now you want us to let another private company do the same thing,” she said. “We're a little traumatized. And it should really be understanding why we want to keep it public.” 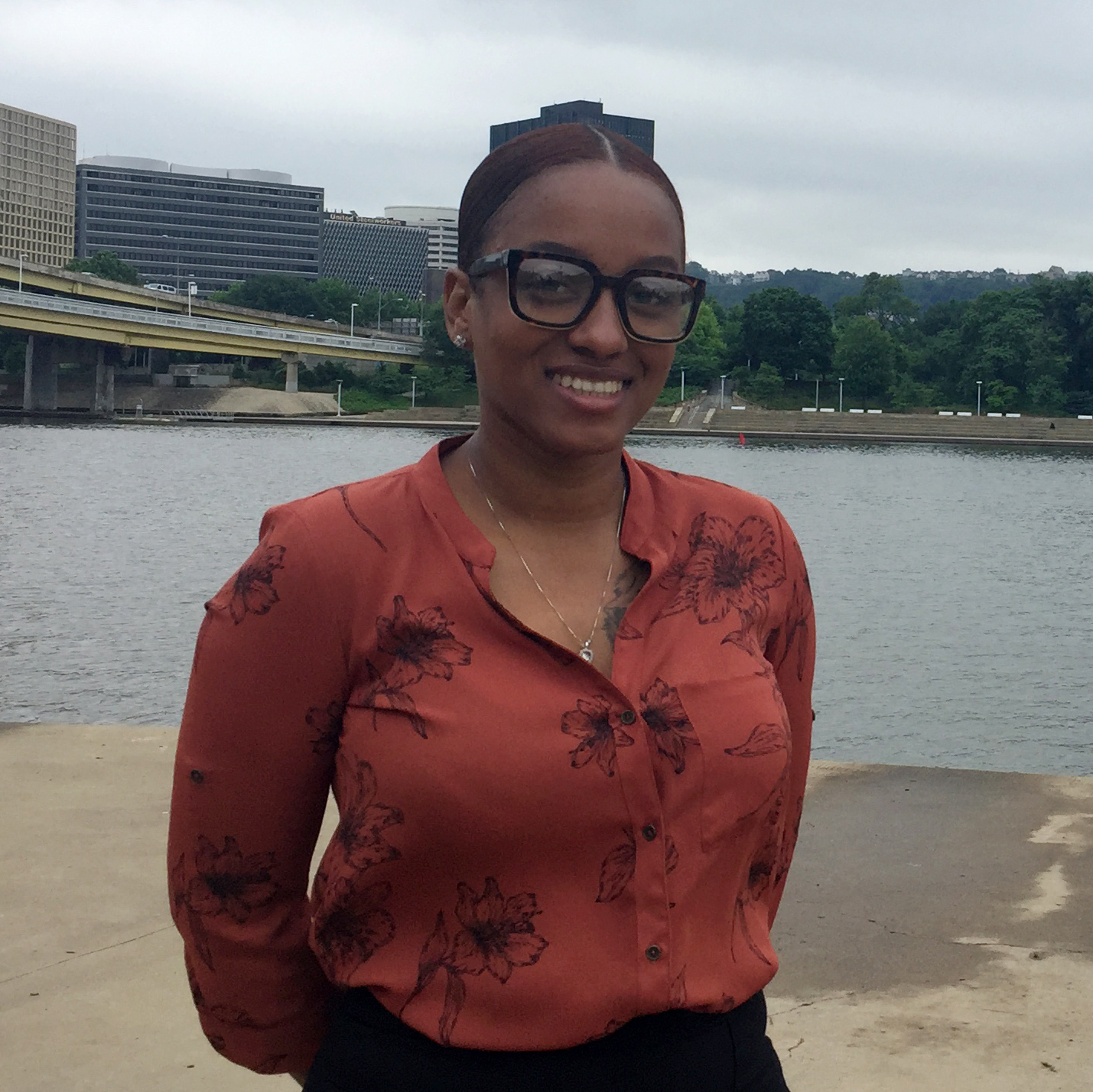 Billie Vaughn, a Hilltop resident and housing advocate, said she joined the opposition to Peoples' plan to own parts of PWSA because another company has already mismanaged the water authority. (Photo by J. Dale Shoemaker/PublicSource)

Veolia, a Paris-based company, managed PWSA from 2012 to 2015, an agreement that ended with the city suing the company for mismanagement. The city accused Veolia of engaging in dishonest billing practices and prioritizing its profits over customers. The city also alleged that Veolia switched the chemical used to control lead from leaching into the water without state approval, causing lead levels to rise in PWSA’s water. The city settled with the company for $5 million earlier this year. Veolia also managed the water system in Flint, Michigan, which experienced a high-profile lead crisis. Flint is also suing the company.

Allegheny County Councilwoman Anita Prizio and City Controller Michael Lamb also spoke at Wednesday’s event, calling for PWSA to remain a public asset. Lamb, who has audited PWSA in the past, said he’s well aware of the authority’s problems but insisted that local officials keep the asset public and commit to fixing it.

“When we have city leaders insisting on this system remaining public while at the same time negotiating to sell the system, that creates that lack of faith,” Lamb said. “When they say they're for having this system public, let's hold them to that promise.”

City Councilwoman and PWSA board member Deb Gross reiterated on Wednesday that she wants PWSA to remain public. She also said she was uncomfortable meeting with Peoples in private so she only talked to O’Brien on the phone and had her chief of staff and a person from the city’s law department present during the call.

She said the details shared during the call were “broad brushstrokes” but amounted to “a partnership that would result in Peoples owning the system.” Peoples wanted to take control of PWSA in part, she said, so it could coordinate replacing water lines with replacing its gas lines.

But the company should already be doing that kind of coordination, she said. “It's a lot of lobbying, but I'm not actually sure what they've shared is anything that isn't what they already could be doing as a good corporate citizen,” Gross said.

In the end, Gross said, keeping PWSA public is about accountability. Lahijuddin agreed.

“Just like any government entity it's up to the people to stay on it,” she said. “If they slip again, the people just have to make sure that they catch it.”