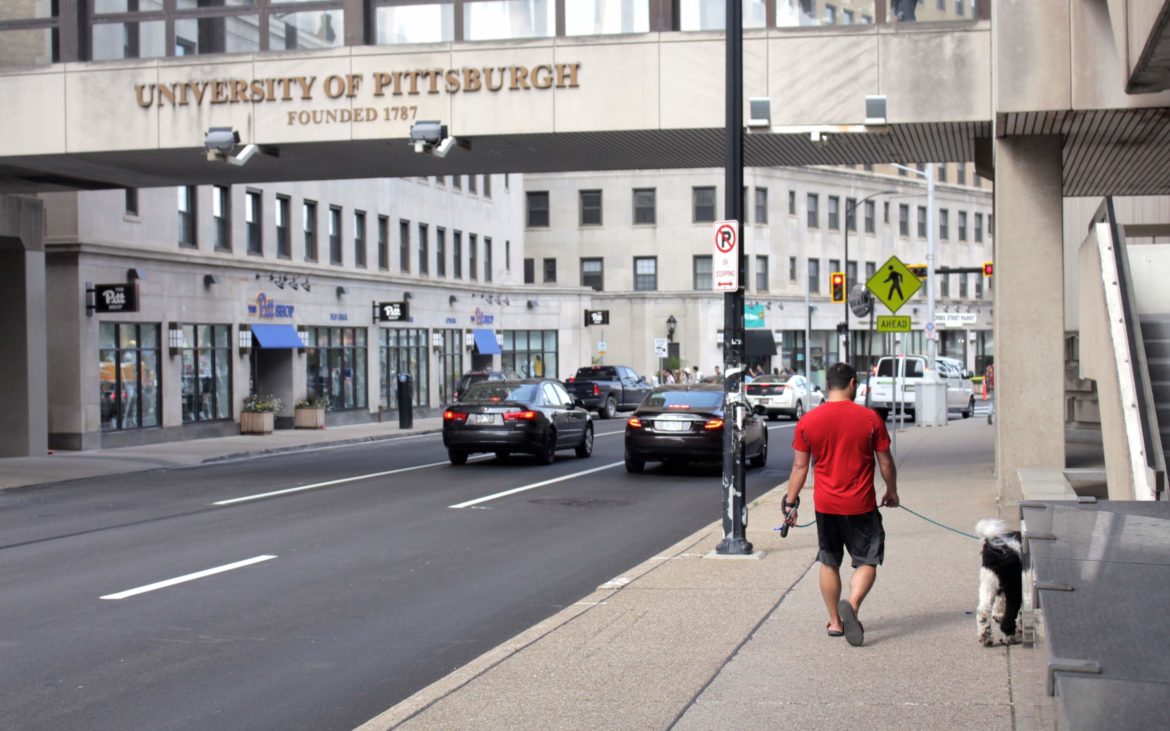 The University of Pittsburgh's campus in Oakland. (Photo by Jay Manning/PublicSource)

The state and federal government are relying heavily on models from public health experts to predict how far COVID-19 will spread, how many people will die and how much additional capacity the healthcare system needs to weather the storm.

PublicSource spoke to Dr. Mark Roberts, the director of the Public Health Dynamics Lab at Pitt’s Graduate School of Public Health, about the FRED model.

The Framework for Reconstructing Epidemiological Dynamics [FRED] model has been repeatedly cited by Dr. Rachel Levine, the secretary of health for the state of Pennsylvania, during her daily press conferences. Levine has used the model’s predictions to justify state decisions, including the decision to require certain counties to “stay at home” before others. The state has asked Roberts to run some scenarios that may guide how and when state leaders eventually decide to start releasing Pennsylvanians from extreme social distancing measures.

The FRED model uses information about where and how residents interact at school, work and in their neighborhoods, to predict the spread of diseases like influenza, H1N1 and dengue. Applied to COVID-19, the model predicts that, with statewide social distancing, the state can limit the number of total hospitalizations to 100,000 and that the peak number of hospitalizations can be delayed for hundreds of days, enough time to potentially make additional healthcare resources available. 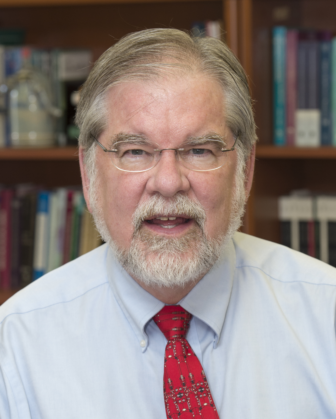 These models can be controversial and complicated because they rely on assumptions that sometimes can’t be known with certainty until much later.

The interview has been edited and condensed for clarity and brevity.

Q: Have you started to look at some different scenarios for the medium term, of how we might come out of extreme social distancing?

A: One of the examples that has been suggested is to maintain social distancing for high-risk people all through the summer. So maybe you would slowly release people by their risk if they got it, such as by their age or something like that. That would still mean there would be people who get sick and don’t do well but would be less than if you release social distancing across the board.

Another option is: What happens if you release social distancing by kind of industry that you work in? Currently people who work in grocery stories, pharmacies, nurses and doctors, they’re still working. They may be social distancing at home but still going to work. We might think about other industries we need to keep the economy up and running.

You could release people from social distancing based on whether they’ve picked up the disease and become immune. They could go back to work and not get infected and can’t infect anybody. We don’t have yet an accurate antibody test, to say, “Yes this person has been infected with COVID-19 and is now done with the illness and can no longer get the disease.” The University of Pittsburgh thinks it will have a good antibody test in the next week or two. [The FDA approved the first antibody test on Thursday, the day of the interview.]

"... it doesn’t take much to exceed the capacities of the healthcare systems in Pennsylvania."

All the models the state has asked us to run included social distancing for a certain amount of time. But whenever you stop doing that, the epidemic takes off again. So we are now doing much longer term models: What happens if social distancing becomes more of a normal than a special case? It will never go back to zero, say.

I personally think the most interesting is to think about relaxing social distancing behaviors based on the ability to know whether the person is immune to the disease or not. Especially if there are a reasonably large number of people who don’t get any symptoms at all. We could test them and say you are immune and can go back to work. I don’t know how practical that is. But, in my opinion, that is the most interesting and accurate way of doing it.

Q: Is that a scenario the state asked you to model?

A: No, that’s one we have thought of ourselves.

Q: Of the scenarios you mentioned earlier in the interview, which ones did the state ask you to model?

A: We mutually agreed to model social distancing of the vulnerable groups during the summer. I don’t remember who exactly proposed it. But one of the things they have asked is: What levels of social distancing will push the peaks down?

Q: Does your model make assumptions about how many more people will die if the healthcare system doesn’t have enough capacity?

A: We currently don’t do that in the model. We just say how many people will need ventilators and hospital beds, and tell people how much that is above or below the healthcare capacity. And it doesn’t take much to exceed the capacities of the healthcare systems in Pennsylvania.

What is useful about social distancing, however, is that social distancing both delays the peak and decreases the size of the spike, so the longer you can delay those peaks, the more you can increase the mechanisms for taking care of people. They’re building new hospitals in New York City and Seattle and thinking about building some convalescent hospitals here. So the more you can delay and lower the peak, the more time the healthcare system has to respond and prepare and the longer you can do that, the more likely there will be that there are treatments and vaccines.

A: We are working on that, not so much myself, but there are people in our Department of Behavior and Community Health Sciences. There are a series of things that can be problematic. For example, people who need regular chronic care may not get the care they need and suffer harm. They may be afraid of coming into the hospital and may be not getting home care. There are a whole set of other problems that can occur.

Living in close proximity could increase things like depression and domestic partner violence and external violence. And people worry about the social impacts when things really become problematic. Let's say you go to the emergency room and there are 400 people ahead of you: How do people respond to that?

And then there is the entire economic impact. We’ve had the largest two-week increase in unemployment ever seen in the United States. Ever. That’s unprecedented so we have no good metric for what having 10 million unemployed people will do to the social fabric.

Q: Do you have to put a price on how valuable a human life is to compare the benefits and costs of reduced social distancing?

A: I have certainly done that in lots of other work. We’re not doing that currently. There are other things that are more important to do right now, in my opinion.

So as you start thinking about how do you balance those things, there are going to be economic and clinical consequences no matter which path you take. That’s why the decisions facing county and state governments are really hard.

Q: There was news on April 2 about Pitt developing a potential vaccine. Could your model incorporate the roll-out of a vaccine?

A: Absolutely. We’ve done vaccination stuff with a lot of other diseases. We could easily do that. It takes a long time to make sure it’s safe, to make sure it’s effective. So although people are working on it at Pitt and a lot of places, there is no absolute guarantee that we’ll be able to create one. They’ve been trying to create a vaccine against HIV and hepatitis-C but haven’t been able to. That doesn’t mean we can’t for this. The early data is pretty encouraging in animal models but it's too early to say now.

Q: Do you think anything is changing or is going to change in your field as a result of this pandemic?

A: I’d like to believe that this kind of problem presenting itself might finally allow people to realize that public health resources are important in the United States and have been ignored for a really long time. We’ve always assumed public health was for developing countries and poor places but these kind of things are important — to track infections, to do case finding, contact tracing of people who might’ve gotten infected. That all requires public health resources we don’t currently have in the United States.

Q: Have you looked at what the annual mortality rate would be if this turns out to be endemic and becomes a fact of our lives like influenza?

A: We’ve thought about that but haven’t really looked into that. It is true when you think about seasonal influenza, it kills a lot of people, no question. And, if you were asking my opinion, I think it’s likely COVID-19 will become an endemic virus and will always be there. I don’t know that but think it’s probably true. If there is a vaccine, that’s great, we can really decrease its impact, but influenza is still a big problem because people don’t want to get vaccinated. The other thing about influenza is there are treatments and so far we don’t have those for COVID-19.

Q: Some experts have compared this crisis to our biggest national emergencies in the past, such as the Sept. 11 terrorist attacks. After that, there was a massive deployment of resources. But some people thought that the way we deployed those resources, such as by fighting a war in Iraq, wasn’t very effective. Have you thought about how we should spend a large increase in resources?

A: I haven’t thought as much about that as I should have. But, in general, the size and funding of public health departments in counties and cities has been declining over time. And in order to be able to be prepared for infectious disease and disaster threats like hurricanes, we need to have a system that is more robust throughout the entire United States. When you think about things like Hurricane Katrina or Hurricane Sandy in New York, the most important thing you remember about that is the rest of the country was fine. You could move resources around from other parts of the country. With something like this, you can’t do that because COVID-19 is everywhere. So you need the resources for public health endeavors to be resilient everywhere.

I do worry that people think it’s just a short-term problem and just a couple more weeks or months, we’ll be able to forget about it.