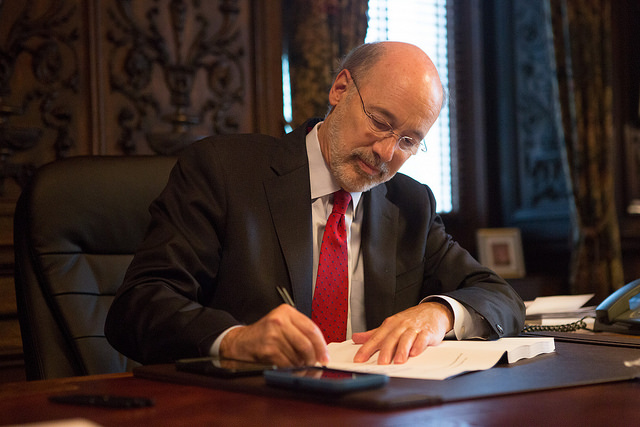 Gov. Tom Wolf and other Pennsylvania leaders planned to offer up to $4.6 billion to Amazon if the company chose Pennsylvania for its second headquarters.

Pennsylvania Gov. Tom Wolf and other officials were prepared to offer Amazon up to $4.6 billion in incentives if the company had chosen to locate its second headquarters in the state.

On Tuesday, Amazon announced it had chosen New York City and Arlington, Virginia, as the locations for its dual-office second headquarters. Collectively, New York and Virginia offered Amazon more than $2 billion in incentives.

The incentives outlined by Pennsylvania included $4.5 billion of a state-funded grant program to offset Amazon’s personal income taxes and $100 million to “support state transportation improvements,” according to a letter to Amazon from Dennis Davin, the Pennsylvania Secretary of the Department of Community and Economic Development [DCED]. The incentives would have worked like this:

The $4.5 billion would be paid to Amazon through a new grant program designed by the DCED, according to Davin’s letter. Had it chosen a site in Pennsylvania, the state would have been paying up to $180 million per year for 25 years. A total of five jurisdictions in Pennsylvania bid for Amazon’s HQ2, including Pittsburgh, Philadelphia, Delaware and Dauphin counties and an economic development group in the Northeastern part of the state. Pittsburgh and Philadelphia made Amazon’s list of 20 finalists in January.

In a statement Wednesday morning, DCED spokesman Michael Gerber said the incentives offered to Amazon would have also applied to other businesses in the state.

“The commonwealth proposed a performance-based incentive program that would be applicable to Amazon’s proposed HQ2 project, but could also apply to other businesses in other communities as well,” Gerber wrote. “The program was designed not just to benefit a company directly, but also to invest into the communities themselves.”

Gerber also noted that the incentive package would have needed approval from the state Legislature before it could be given to Amazon or any other company.

In Davin’s letter, he also highlighted the state’s “talent pipeline,” citing Wolf’s increases in K-12 education funding and promise to have 10,000 students majoring in a STEM (science, technology, engineering and mathematics) program at the state’s public universities by 2020. He also made a pitch that Pennsylvania was the right place for Amazon culturally.

“Pennsylvania was founded centuries ago on the principle that all are welcome, and can practice their faith and culture as they see fit,” Davin wrote. “That spirit is still very much alive today, and we strive to uphold its legacy, so that when people are choosing where to go to school, begin their professional lives, start a company, or raise their family, they know that Pennsylvania is open to them.”

You can read the two letters below.