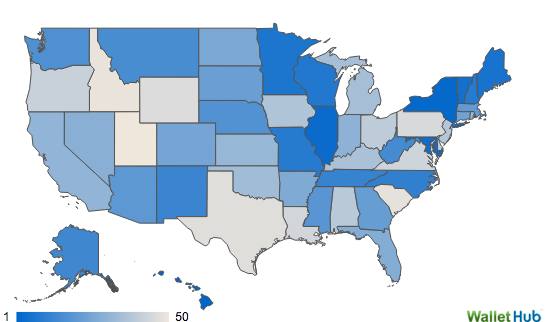 Pennsylvania ranks as the sixth worst state for women’s equality, based on a number of factors like the pay gap and political leadership, according to a study by personal finance website WalletHub.

In Pennsylvania, women comprise more than seven in 10 minimum-wage employees. Right now, that wage is $7.25 an hour, and only $2.83 for tipped workers. (See our story on Sunday to learn about efforts to raise the minimum wage in the state.)

The workplace environment data looked at median weekly earnings, the unemployment rate, the number of executives, the number of minimum-wage workers and several other areas.

The report cites the Center for American Progress’ findings that in the U.S.:

For those measures, Pennsylvania ranked 39th overall, but also 30th in terms of equal pay and 48th in the number of female minimum-wage workers.

Serving as one feather in the state’s collective cap is Pennsylvania’s unemployment ranking: The state has the fewest number of unemployed women in the country, according to information from Diana Popa, WalletHub’s communications manager.

Pennsylvania landed near the middle of the pack in education, which looked at the number of women over age 25 with bachelor’s degrees and their standardized math test scores.

The state fell behind again when it came to counting the number of female lawmakers in the state Legislature. Only seven states had lower rankings than Pennsylvania, illustrating the lack of representation of women in the Capitol.

Overall, according to the WalletHub study, Hawaii is regarded as the best state for women’s equality, followed by New York and Illinois.

Utah and Wyoming were shown to have the biggest gender gaps.

Right now, estimates indicate that the wage gap in Pennsylvania won’t close until 2072. Although the state lags in most areas, Millennial women appear to have the power to reduce the gap.