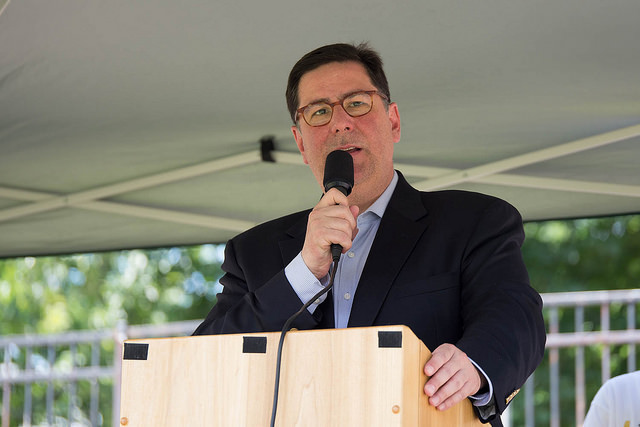 Mayor Bill Peduto was in the hot seat Wednesday afternoon talking about economic and racial disparities in the city.

The mayor, who does a monthly spot at noon on WESA’s Essential Pittsburgh, focused on Pittsburgh’s affordable housing issue, racial bias on the police force and Flint’s water crisis, among other topics. Peduto acknowledged that although Pittsburgh is a city growing economically and technologically, a large portion of its residents aren’t feeling the positive effects of those developments.

Peduto said the Penn Plaza debacle — where residents, the city and developers are still in talks about relocating displaced low-income families — is an example of the city stepping in to offset gentrification.

“Think about the history of this city. We have forced people out of public housing,” Peduto said. “For the first time, we are getting involved in private housing.”

In early January, Peduto pitched his idea for using federal Section 8 funds to subsidize housing so that low-income families could afford to own, rather than rent, homes.

The mayor’s office has created about 200 affordable housing units in Larimer, 150 in the Hill District and 150 in East Liberty, according to Peduto.

“We have plans in the next several years for thousands more,” he said, adding that 7,000 people have applied and qualified for affordable housing in Pittsburgh.

The city’s most recent affordable housing action took place at the end of January, when it struck a deal with owners of the Crawford Square Housing Development in the Lower Hill District.

In the 1970s, 188 of the units were set aside to be affordable housing, but the restrictions on selling 143 of those properties at market value ended in 2016. The mayor’s office wrote to McCormack Baron Salazar and AIG, the owners of the Crawford Square development, near the end of 2015 to encourage them not to redevelop and move low-income families out.

“With the increasing popularity of Pittsburgh as an urban destination and the resultant rising rent levels, it is extremely critical that the City maintain the economic diversity that makes it the special place it is,” Peduto wrote in the letter in November.

Peduto was cautious about overemphasizing the economic benefits of technological powerhouses, including Uber and Google.

“[It’s] a big mill being built, basically, with technology and innovation,” he said, but added that about 20 percent of people have no access to that technology or its economic ripple effect.

“This is the same thing we had a hundred years ago — you had the people that owned the mills and the people that worked in the mills, and there was a vast difference between the two of them,” Peduto said. “Is there a role for government in order to be able to provide opportunity...or should the market decide that?”