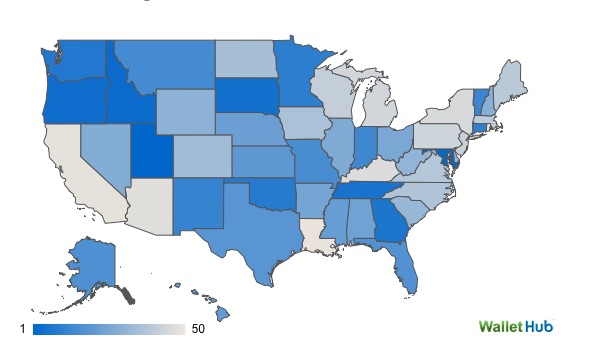 The United States ranks second overall in the World Giving Index, but Pennsylvania has little to do with it. Of the states, Pennsylvania ranks 43rd in charitable behaviors, according to a WalletHub study.

WalletHub defines charitable giving as both monetary donations to charities (which includes religious organizations) or by the number of volunteer hours contributed from September 2013 to 2014.

In most of the metrics WalletHub analyzed, Pennsylvania sits around the median. But when it comes to donating money, Pennsylvania is 41st in the percentage of total income donated.

The state does slightly better, at 38th, in the number of people who donate money, even if they don’t give a lot of it.

As a whole, Pennsylvanians are more likely to volunteer their time.

WalletHub rated Pennsylvania as the 24th highest volunteer rate and 25th in the number of volunteer hours per capita.

The state Department of Labor and Industry can help link citizens with some of the thousands of available volunteer organizations.

On a graph of the richest and poorest states against their charity rates, Pennsylvania comes up mixed.

The study’s main findings show that Utah, Maryland and Idaho are the most charitable states, while California, Louisiana and Rhode Island are the least.

The study also shows that Republican states are slightly more charitable than Democratic ones. WalletHub classified states based on how they voted in the 2012 election, where Pennsylvania voted Democrat.

Experts told WalletHub that it’s up to families and their individual finances as to how they can best contribute to charity.

On the other end of the spectrum, WalletHub analyzed how much money families in 563 cities spend on Christmas presents.

In Pennsylvania, Bethlehem is the highest on this list, at 196th, for spending an average of $908 a year.