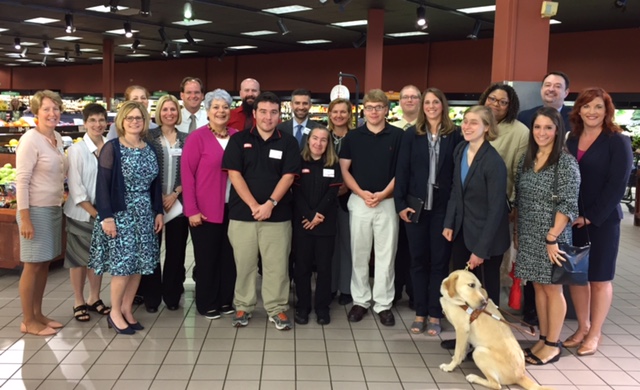 Vulakovich, 20, works in the store’s health and beauty section and is taking food-service classes at the Community College of Allegheny County, while Edgar, 22, works in health and beauty, dairy and other areas of the North Hills market.

“My favorite part [of the job] is probably just being around all the people,” Vulakovich said, who added that the job experience has made her more outgoing.

They are among the more than 1,000 workers with disabilities employed by Giant Eagle who perform a variety of jobs, like bagging groceries and collecting shopping carts from the parking lot.

Manderino’s lesson in blocking, or the art of creating a tidy and appealing retail shelf, came as part of a stop on Gov. Tom Wolf’s “Jobs that Pay” tour. Manderino was in Pittsburgh to talk about a $7.5 million statewide summer youth employment program and the governor’s proposed $5 million increase to the Office of Vocational Rehabilitation (OVR).

The OVR budget would increase from $40 million to $45 million, if that portion of the governor’s proposal passes. Manderino also said that a $5 million increase in the OVR budget could result in $18 million more in matching federal funds from the U.S. Department of Education’s Rehabilitation Services Administration.

Manderino didn’t have a specific plan for how the extra money might be divided among the department’s different programs, but said, “I think look for an expansion in all of our areas, as far as the money will carry, but with a concentration on the transition-aged youths.”

But some of the major revenue sources proposed by the governor appear to be floundering in the Legislature.

His proposed $1.2 billion sales tax expansion, which would apply the sales tax to 46 categories of goods and services that are not currently taxed, was “a political nonstarter,” according to Rep. Seth Grove, R-Dover Township, in a previous PublicSource story.

Wolf is also struggling to find support for his 5 percent severance tax, which could eventually raise nearly $1 billion per year for the state.

If the state doesn’t raise extra revenue, it could jeopardize some of the budget increases proposed by Wolf, which would force the governor to prioritize some areas over others.

PublicSource previously reported on low wages for individuals with disabilities after examining thousands of pages of documents from the U.S. Department of Labor.

Our analysis found that at least 13,000 Pennsylvanians were paid an average of $2.40 in a legal use of subminimum wages. Most of these positions were in sheltered workshops, where nearly every employee has a disability and the work often includes tasks like folding boxes or stuffing mail.

“There is very much...a debate within the disability community and communities at large about the roles of some of the other work programs for people with disabilities,” Manderino said.

She said job placements through OVR are only made at minimum wage and above.

The OVR has placed more than 200 employees statewide with Giant Eagle over the past three years. The Pittsburgh OVR office alone works with roughly 700 area employers on job training and job placement for people with disabilities.