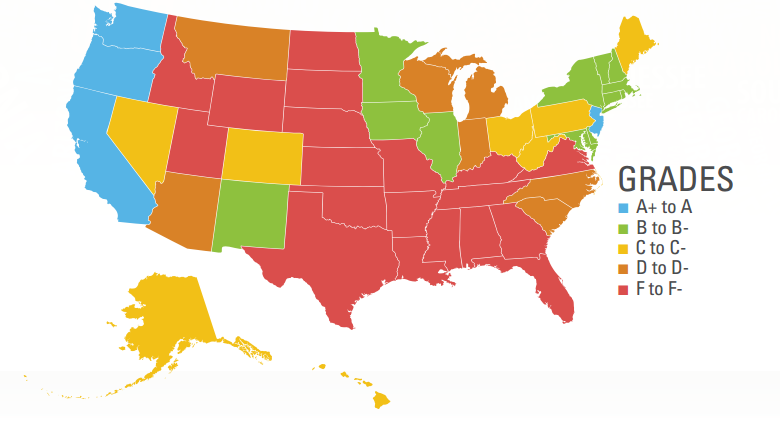 The United States earned a D+ for its performance in offering women’s reproductive rights and services in an annual report card by the international nonprofit Population Institute.

The grade reflects a slip from the C- the United States got last year.

Pennsylvania was one of eight states to earn a C grade with an overall score of 59 out of 100, which is an improvement over last year’s D grade. Attributing to its low score, the institute’s report points out that Pennsylvania does not mandate sex education in schools and the state has restrictive abortion laws.

The Population Institute, based in Washington, D.C., works as “seeks to promote universal access to family planning information, education, and services,” according to its website.

The report, published Jan. 7, outlined criteria surrounding the effectiveness in how states prevent unplanned and unintended pregnancies; the affordability of birth control for “uninsured and low income individuals;” access to family planning services; and prevention, including sex education and emergency contraceptives.

On the same day the report came out, the U.S. House of Representatives voted for the eighth time in favor of eliminating federal funding for Planned Parenthood. However, President Barack Obama has said he will veto any actions to withdraw funds from Planned Parenthood, according to an article from the Huffington Post.

In Pennsylvania, almost half of women do not live in a county with an abortion provider, according to the report. Women who have decided to have an abortion are required to wait 24 hours between counseling and the actual procedure. If the female is a minor, she must also receive parental consent.

The state lost more points for its effectiveness in handling teen and unintended pregnancy rates and access to emergency contraceptives.

“Unfortunately, today’s report card indicates that Pennsylvania is falling short in several key areas, and those failures, in turn, contribute to high rates of unintended and unwanted pregnancies, including teen pregnancies. That should be a matter of great concern to women and their families.”

The increase over last year’s score is due to Pennsylvania's Medicaid expansion program under the Affordable Care Act.

Oregon got the highest score of all the states, with a 90 out of 100; it was followed by California, Washington and New Jersey. Oregon was praised for its mandated comprehensive sex education in public schools and its ease of access for women to receive abortions.

The lowest-scoring state was Louisiana, which only earned 21 points.

“...21 states, including Louisiana, have refused to expand Medicaid under the Affordable Care Act, leaving tens of millions of women without improved access to contraception and other health care services.”

The United States scored poorly because of several key factors, including high rates of teenage and unintended pregnancies, a lack of a mandated and standardized sex education in schools, abortion provider laws and defunding of family planning centers, according to a press release from Population Institute.

The report said there is an “extremely hostile” mood surrounding reproductive health and rights in the country, only enhanced by Congress targeting Planned Parenthood and Title X, a federal program which provides both family planning and preventive health care, according to the U.S. Department of Health and Human Services.

“This report should be a wake-up call for all those worried about the status of reproductive health and rights in their state,” said Population Institute President Robert Walker.

“At the state level the trend is particularly worrisome,” Walker said. “Increasingly, the reproductive health of a woman depends on the state or community where she lives. That’s wrong as a matter of both rights and health.”