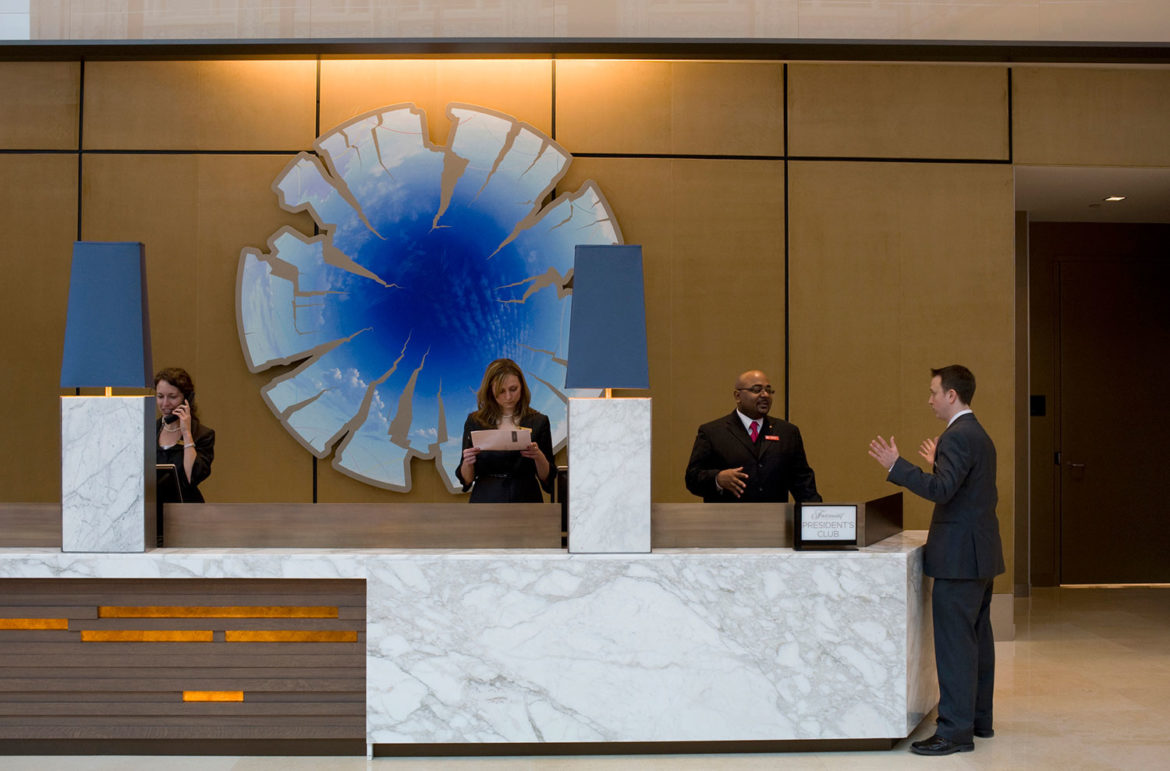 If you’ve stayed at the Heritage Hills Resort in York while touring Amish country, toasted newlyweds at the Avalon Hotel in Erie, or settled in for a weekend of pampering at Nemacolin Woodlands Resort in the Laurel Highlands, chances are the person who made your bed, poured your champagne or washed your towels wasn’t being paid minimum wage.

In fact, the state ranks fourth in the country -- behind Texas, Alabama and Florida -- for the number of hotels breaking labor laws, according to a PublicSource analysis.

York, Erie and Pittsburgh had the highest number of violations by their hotels, with Farmington, Lancaster and Harrisburg coming in behind them.

These workingmen and women, who may have few skills to find another job, are often reluctant to talk about their situations, as PublicSource discovered after making many attempts to reach them.

“These workers are subject to retaliation from employers, and some hotels have non-disclosure agreements,” explained Mackenzie Smith, an organizer and executive board member for UNITE HERE Local 57, which represents hotel workers in Pittsburgh.

George Ference, regional administrator of the U.S. Department of Labor’s Wage and Hour Division in the Northeast, said the industry “accounts for a disproportionate share of vulnerable workers – many of whom are subject to unfair treatment and disparate wages.”

A PublicSource analysis of data from the labor department from May 2008 to May 2013 shows that Pennsylvania hotels have routinely violated federal laws meant to protect their employees.

In York, Heritage Hills Golf Resort operates a luxury hotel, spa and golf resort. According to the DOL’s report on Heritage, the resort is a “repeat violator” of labor laws, with previous violations found in 2003 and 2007. Heritage Hills is also one of eight hotel owners in the state assessed federal fines for violating child labor laws.

Two years ago, the parent company of Heritage Hills agreed to pay $55,353 in back wages to more than 200 workers after a three-year federal investigation found violations related to minimum wage, overtime, record-keeping and child labor laws. It also paid $5,000 in penalties.

Since that time, the company has cut back on the number of people under 18 it puts on its payroll, said Brandy Meyer, a spokeswoman for Heritage Hills.

Hiring fewer minors “is not great for the community because high-school students can be exemplary employees,” she said.

These numbers helped make York the city with the highest number of labor violations in the state.

Erie came in second, thanks mostly to the Avalon Hotel & Conference Center. The Labor Department uncovered 138 violations committed during a two-week period in April 2009. Avalon agreed to pay 69 workers more than $25,000 in back wages in 2009, but did not pay them by the DOL’s deadline. Only after several days of phone calls from the DOL did the workers finally receive their back wages, according to the department’s report.

“I didn’t own the hotel then,” said Ramesh Diora, the current owner. “And we don’t have any problems now. When people work, we pay them.”

Diora said that he is unconcerned about making the same mistakes as the previous owner.

Hotels find many ways to cut corners when it comes to paying their workers. Among Pennsylvania hotels, the most common violations were failing to pay employees the federal minimum wage of $7.25 an hour, and disregarding the law to pay them one-and-a-half times their regular hourly wages for working  more than 40 hours per week.

Heritage Hills in York and the Fairmont Pittsburgh, the city’s newest hotel, got in trouble with the DOL for several types of violations, including requiring low-wage employees to pay for name tags and other job necessities.

Heritage Hills deducted wages for meal breaks workers didn’t take. Meanwhile, meal servers went unpaid for work done when they began working before their scheduled start time, as the hotel expected them to.

“Some hotel owners are looking to make every dime out of the property,” said John Graf, president of the Western Pennsylvania chapter of the Pennsylvania Restaurant and Lodging Association. “They want to put as little money into the property as possible.”

In addition to wage issues, hotel violations have also taken the form of hotel owners classifying housekeepers, custodians, cooks, desk clerks and others as independent contractors instead of employees. This allows hotels to avoid paying for family and medical leave, unemployment insurance and other costs.

“A plumber or a painter is an independent contractor,” explained John DuMont, director of the Wage and Hour Division’s District Office in Pittsburgh. “They determine what you will pay them and how long they’ll work. And the nature of the working relationship is not ongoing.

“But a housekeeper can’t decide her hours or how much she’s getting paid,” DuMont added. “If the employer controls your hours and pay, you’re not an independent contractor, you’re an employee.”

A Wage and Hour investigation usually begins with a confidential complaint. Once it’s filed, labor investigators may contact the employer or visit the hotel unannounced to interview employees or review time cards, payroll records and other documents for up to three years prior to the complaint.

The DOL determines the city in which violations have occurred based on the business address the employer provides. The PublicSource analysis used the addresses as reported in the federal database, so some hotels are slightly outside of city boundaries.

Pittsburgh is the city with the state’s third-highest number of violations. Its 113 labor violations are distributed among just 18 Pittsburgh-area hotels. But while most of those hotels had violations in the single digits, the Four Points Sheraton at the Pittsburgh Airport had 16. Among its illegalities was paying housekeepers per room cleaned instead of by the hour, and falsely recording the per-room rate as an hourly rate.

There were 18 violations at the Days Inn on Banksville Road, where one worker told the DOL that the hotel avoided paying overtime rates by paying in cash at the straight time rate for overtime work.

“The violations you refer to were brought to our attention a year and a half ago, in January 2012,” said Julie Abramovic, a spokeswoman for the Fairmont Pittsburgh. “The additional wages were immediately repaid, and we have updated internal procedures to comply with wage and hour laws. Since then we have been in total compliance.”

Nearly tied with Pittsburgh is Farmington, whose 112 violations all come from the popular Nemacolin Woodlands Resort, which opened in 1987. In 2010, the self-described “lavish Forbes Travel Guide Four-Star resort” agreed to pay nearly $10,000 in back wages.

The Fairmont and Nemacolin failed to base overtime pay on employees’ full hourly rate. Instead of paying food servers and others 1.5 times their hourly wage, the workers were paid 1.5 times an amount that was one-quarter to one-third of their hourly rates. Employers often do this to employees who receive tips from customers.

The DOL reports did not indicate whether the employers had done this deliberately.

“We had changed over to a new system, and we plugged in the wrong calculation,” said Chris Plummer, Nemacolin’s general manager. “We calculated overtime based on the wrong hourly wages. But we put what we owed into our associates’ next paychecks, and they were really happy about it.”

Abramovic would not give further details on the Fairmont’s violations or their resolution.  “We do pride ourselves on being a good neighbor and employer,” she said.

The Labor Department has begun to push for changes in Pennsylvania hotel violations. In 2011, the department launched an initiative aimed at protecting the state’s hotel workers by doing more random checks for labor-law violations.

According to a DOL press release that year, the initiative was “focusing on Pennsylvania’s hotel and motel industry, in which the division has found consistent and widespread noncompliance with the minimum wage, overtime and record-keeping provisions of the Fair Labor Standards Act.”

The state initiative followed up a similar effort, aimed at Pittsburgh-area hotels, starting in 2009. Since then, the DOL has recovered more than $15,000 in back wages for 59 hotel workers in Pittsburgh.

Plummer said that Nemacolin, for one, welcomes DOL scrutiny.

“We made a mistake; we owned up to it and we fixed it,” he said. “We go through audits to make us better.”

Diora shrugs off any DOL probe.

“You know how labor departments are,” said Diora. “They want to collect as much money as possible.”

Graf is co-owner of The Priory on Pittsburgh’s North Side, which has no violations in the DOL data. He calls it “short sighted” for hotels to violate labor laws.

“We want to keep our team members happy and we want them to stay with us,” he added. “But if people feel they’re being taken advantage of, that won’t happen.”

Also contributing to this story were Sean Adkins of the York Daily News and Jim Martin of the Erie Times-News. Both newspapers are PublicSource partners.

How we reported this story

PublicSource downloaded the most recent  “Wage and Hour Compliance Data” from the U.S. Department of Labor’s website. For each employer investigated, this data contains company names, addresses and industry categories. It also includes the types of infractions and the laws broken. For each violation, the data lists the number of counts, how many employees were affected, the dates of violations, back pay and penalties owed.

The data included violations for employers in all industries in all U.S. states and territories, with dates going back at least a decade. PublicSource pulled out compliance data for Pennsylvania. From that, we focused on data for “Hotels (except casino hotels) and Motels.”

All of the federal data is reported according to the city from which the hotel or motel reports. So, some of the establishments are actually outside the city zip codes.