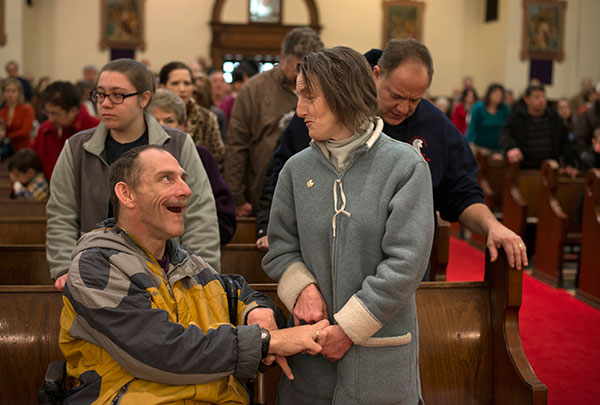 MILLVALE — Bob Norris zips down the bus’s metal ramp in his motorized Steelers wheelchair as his wife, Tina, emerges with a jolting gait.

Her slender frame askew but confident, Tina marches through the Giant Eagle with a list of foods and prices on her mind.

Bob lingers in the aisles, hoping to chat up the friendly store manager. His slurred speech doesn’t prevent him from making new friends.

Tina traps a loaf of bread with the side of one hand and a curled wrist while Bob holds open a reusable grocery bag.

The couple then pauses in a corner as Tina roots through her turquoise purse. She hands three $20 bills to Bob and they start toward the cash registers.

It’s part of their system, designed not to delay other shoppers.

The Norrises are unique for many reasons, one being that they both have cerebral palsy.

Each tries to fill the gaps where the other one falls short, doing their best, not always succeeding — just like any other couple.

They’ve been married for 22 years.

Their lasting marriage is not only distinguished because of the failure rate of marriages in general, but also because people who are disabled are practically given incentives not to make the commitment.

Many benefits from federal and state assistance programs for people with disabilities can be reduced or lost when they marry. To avoid that, some couples choose to live together unmarried.

That just wouldn’t do for Bob and Tina.

Bob remembers being nudged by an aide to call the sweet girl he had mentioned a time or two.

Tina, 18 at the time, thought of him as a role model. He lived on his own.

“We went out and we hit it off,” she said. “Twenty-two years later, here we are.”

The pair met at Allegheny Valley School, a nonprofit that serves people with disabilities.

It was Memorial Day about four years later when Bob’s relatives helped him navigate his rigid body to one knee in his mother’s kitchen.

“They broke me in half, but I wanted to do it right because it’s a one-time deal,” he said. “Tina was in the living room. I called out to her, asked her and bingo!”

They were married by a justice of the peace in front of about 50 people that August at a Moose Lodge, a few blocks from where they live now.

Bob’s mother, Pat, was relieved he found Tina, she said during her shift at Yetter’s Candies in Millvale. The mother of another son who is deaf and doesn’t speak, she was worried Bob’s disability would keep him from love.

Cerebral palsy is a disorder caused by abnormal brain development or damage to a developing brain, usually before or during birth, according to the Centers for Disease Control.

It affects balance, posture and muscle control. It can be accompanied by an intellectual disability or problems with vision, hearing or speech. There are different types of cerebral palsy, and as Tina and Bob show, the severity of symptoms vary.

“Sure, I’d want a child with my husband, but if I can’t do for myself, what can I do for my children?” she said.

That outlook is waning as more user-friendly equipment and resources come about to help disabled parents care for a child, said Judi Rogers, a pregnancy and parenting specialist with California advocacy group Through the Looking Glass.

“The disability-rights movement makes people feel they can achieve their dreams,” she said.

The couple lives in a ground-floor apartment in Millvale. Bob has lived there since Tina was still a crush.

They enter from the parking lot off a side street. The lot’s driveway is so steep that cars bottom out, yet Bob and Tina take it on foot or wheelchair on a daily basis.

In their apartment, the heating unit is cranked. Their bones get stiff in the cold, they explained.

A police scanner hums under the living room’s lone window. “It’s a bad habit,” Bob, 48, said. His father was a fireman in Millvale, and the scanner is a soothing reminder of him.

Her name is Nancy Coban. She is 71, lives down the hall and happens to be Bob’s aunt.

She has permed hair just like Bob’s mom and his other aunt, who take over caregiver duties on the weekend.

She works for PCG Public Partnerships, a group paid through a state waiver program that promotes home and community-based services instead of institutionalization.

On a brisk December day, Bob waited without a shirt as Nancy found his white turtleneck. His brawny shoulders and chest make it look like he spends his days in a weight room. But Nancy explains that the muscle tone is from spasms.

In the kitchen, Nancy lights a cigarette and microwaves pancakes.

She feeds Bob, while Tina maneuvers a fork alone.

Nancy leaves after the last bite. She’ll be back to serve lunch to Bob once Tina leaves for work.

Tina clears the plates off the table and washes the dishes. She fumbles with every glass and plate. It doesn’t matter that it would take the caregiver half the time. It’s her household to keep.

That mindset has led to tension between the two women. Tina appreciates Nancy, but wishes she could do it all herself.

“It was hard for Tina at first, another woman touching all her stuff,” Nancy said.

Tina and Bob admit they need help. But their voices boom when they talk about people who think aides do everything for them.

“It takes a lot of brains to run a household and know what we can and cannot do,” Tina said. “We’re the minds behind it.”

For nearly 21 years, Tina has held pretty much the same job at Achieva Mailing and Lettershop Services in the Strip District.

She clamps a single envelope to the desk with her right elbow, hunches forward and methodically stuffs leaflets inside. Then again, and again, from 1 to 5 p.m. Monday through Friday.

A few dozen employees, many of whom also have disabilities, do similar work side-by-side nearby. Tina works at the lone corner desk, and she doesn’t take a lunch.

“She’s very personable, but she focuses on her work,” said Jodi Barber, a production manager.

Tina expects to do the same job until she hits retirement age, which is a source of frustration, said Barber, who has supervised Tina for the last four years.

“She gets upset that it’s the only job she has and that she can’t do it faster,” Barber explained.

Achieva is a Southwestern Pennsylvania nonprofit that provides educational, career and other support for people with disabilities.

The federal minimum wage was $4.25 at the time. A federal law allows some employers to pay below minimum wage to workers who are disabled.

Tina sucked in a heavy breath and pushed back tears when she talked about her gratitude for work.

“They look over my disability and I always try my best,” she said. “They let me work there. They could have hired someone who could do it faster.

“If I didn’t have Achieva, I’d have to walk into a McDonald’s, and they wouldn’t want me.”

About 325,500 disabled working-age Pennsylvanians are employed, only 21 percent of that population, according to the Census Bureau’s 2012 American Community Survey.

Bob meets Tina at the bus stop at the end of the workday. On the way, he said, this is when he thinks most often about why God made him disabled. “I try to help her, but she has to go to work and do things I can’t alone.”

The couple lives on Tina’s paycheck and Social Security Disability Insurance, a total of less than $1,400 a month.

They have a Section 8 voucher for their basement apartment, which brings rent to $308. They also pay for electricity, cable services and health insurance.

“We’re making it, we’re paying the bills and we’re buying our own food,” Tina said.

Bob joked: “We’re not in the poorhouse yet.”

But they still took a hit after getting married.

Marriage can change benefits if the assistance program counts household income. A couple is essentially treated as one person, which can result in reduced or lost benefits.

For example, when two recipients of Supplemental Security Income [SSI] marry, their benefits are 25 percent less than if they remained unmarried, according to the 2014 federal payment amounts on Social Security’s website.

Bob and Tina both lost SSI benefits after marriage.

“People with disabilities shouldn’t have to choose between having a relationship and having a wheelchair, or between love and their medication,” said Lawrence Carter-Long of the National Council on Disability. “That’s what they are faced with.”

A bill proposed by Arizona Congressman Raúl Grijalva in April 2013 would increase and annually adjust the amount of income and assets allowed to be eligible for SSI.

It’s unclear how many of the estimated 1.7 million disabled Pennsylvanians are affected by the so-called “marriage penalty.” The state does not track marriages of people with disabilities.

Rob Pritchard, manager of the Family Dollar store frequented by the couple for Pepsi and peanut butter cups, recalls the day he was able to see past the handicap, a moment of personal growth that their kindness nurtured.

Bob advocates for himself and others by making noise about ramps and accessibility in the small borough of 3,750 residents along the Allegheny River, said friend Jack Snook, a director at Community Living and Support Services, a Western Pennsylvania organization that serves people with disabilities.

Some of Bob’s vigor stems from a childhood memory when accessibility wasn’t yet a buzz word. The wooden ramp his father built to get him over the stoop into his family home was taken away as garbage.

“He’ll go to borough meetings and just fight up and down with people about curb cuts,” Snook said.

Neighbor Dion Evans came to know the couple through conversations on bus trips or while wrenching away on his mother’s 1987 Nissan Sentra. He had trouble understanding them at first.

“But I wanted to understand,” he said. “They’re just two beautiful people.”

Bob hollers a greeting and flashes a charming cockeyed smile to passersby when he and Tina are walking about town.

Most everyone responds in kind. “Hi, baby, how’re you doing?” a gas-station patron called out one day.

There are still instances of boorishness. Schoolchildren sometimes stare; a man in a hard hat was visibly exasperated that he had to step into the road to get around Bob’s wheelchair; and a businessman’s snub was capped with an eyeroll.

Bob and Tina shrug it off.