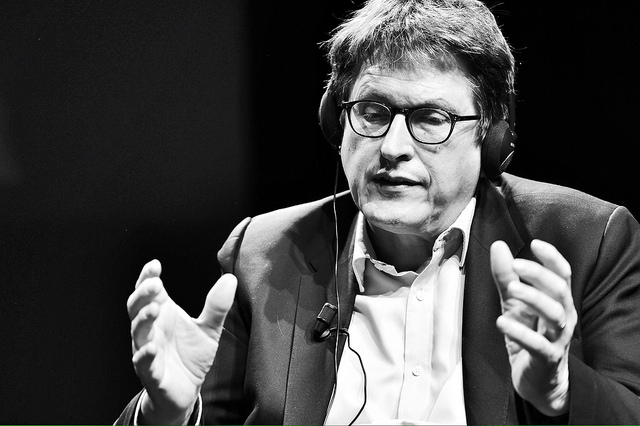 The Guardian’s Alan Rusbridger is choosing one story as his last hurrah after two decades in charge of the paper: Climate change.

“Our children’s children will be staggered at our idiocy,” Rusbridger said in a podcast about the project.

Before he leaves as editor-in-chief of the British national daily newspaper this summer, Rusbridger has embarked on a major series devoted to telling stories in “different ways” about the climate crisis.

“It’s clearly the most important story that we could be thinking about,” he said in the podcast. “And yet, you scan the daily newspapers and it’s nearly absent.”

Rusbridger says journalists struggle to tell stories on the issue because changes to the earth’s climate may be “happening too fast for human comfort, but they happen too slowly for the newsmakers — and, to be fair, for most readers.”

And, Rusbridger said, climate change presents many things that may happen but have yet to occur, which doesn’t traditionally work for the media.

But “these events that have yet to materialise may dwarf anything journalists have had to cover over the past troubled century,” he wrote in an editorial about the project.

“There may be untold catastrophes, famines, floods, droughts, wars, migrations and sufferings just around the corner. But that is futurology, not news, so it is not going to force itself on any front page any time soon.”

A Guardian project asks this: “Is there a new way to make the world care?”

A podcast series from the Guardian will provide a behind-the-scenes look at Rusbridger and his team of journalists as they attempt to find a new narrative on the issue.

In the first episode, he said the project is personal. He decided to embark on it this past Christmas when he was thinking about whether he’d have any regrets when he left his post.

“Very few regrets, I thought, except this one: that we had not done justice to this huge, overshadowing, overwhelming issue of how climate change will probably, within the lifetime of our children, cause untold havoc and stress to our species,” he said in an article about the project.