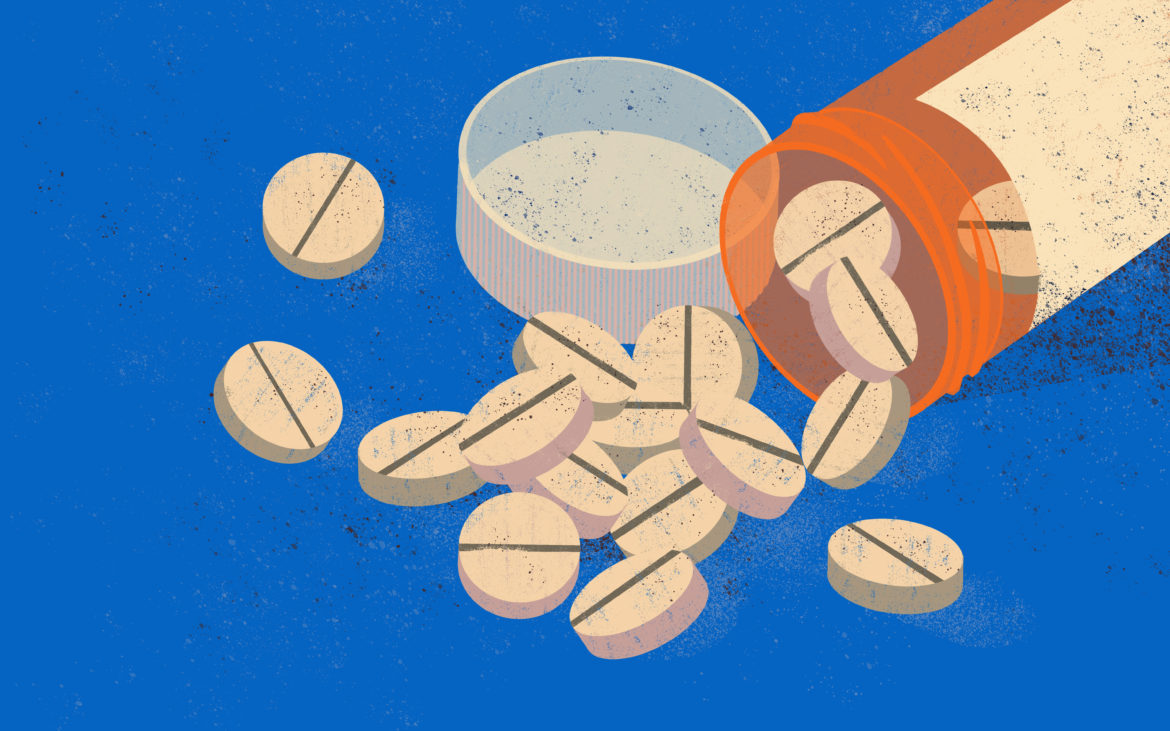 Lucy sat in her car on a cold January day outside the Allegheny County Jail for eight hours, waiting for her son John to be released.

John wanted her to be there, she said. He worried he might relapse on heroin if she wasn’t outside the jail to greet him. When he was finally released, he started crying.

Lucy began looking for a doctor’s appointment to get him back on his medications, which he wasn’t able to receive in jail. He was taking two drugs to treat his bipolar disorder, and Suboxone, a prescription drug used to help stabilize people with opioid use disorders. But she couldn’t find anyone who could see John right away.

In the days after his release in 2011, John, then 27, helped his 15-year-old sister with her math homework. He talked with his mom about his plans to expand his medical staffing business. And he made plans to take his 5-year-old daughter to a Christmas show at the Benedum Center for the Performing Arts. Lucy asked that their last names be withheld to protect John’s daughter.

John bought a couple of stamp bags of heroin, so that he wouldn’t feel the effects of his drug withdrawal so much when he was with his daughter.

But they never made it to the show.

John overdosed in the bathroom of a coffee shop.

Since John’s death ten years ago, more than 4,500 people have died of an overdose in the county, hundreds of them after leaving the jail. An Allegheny County analysis of overdose deaths between 2015 and 2016 showed that almost one in every five people who died of an overdose had been released from jail at some point in the previous year. About half of that group died within 90 days of being released and a quarter died within 30 days of leaving the jail.

On Monday morning, Lucy was one of more than 180 doctors and health experts, community members and formerly incarcerated individuals, who sent a letter urging the jail to immediately begin to administer drugs like Suboxone and methadone to incarcerated people with substance abuse disorders, like the one John had. The letter was emailed to Allegheny County leaders, including the warden and the county executive.

The county, which historically has limited medication-assisted drug treatment to pregnant women, says it has been working for the last two years to implement a broader program. Currently, nine people in jail are receiving Suboxone, including one pregnant woman, and 16 people are being treated with naltrexone, a drug that inhibits desire for opioids but doesn’t have an opiate effect like Suboxone.

In an emailed statement, county spokesperson Amie Downs said a” task force has been working for two years to prepare the jail to begin administering these drugs. The group “examines training and education for personnel, diversion programs, medication access in jail and in court-involved populations.”

On Thursday, the county’s Jail Oversight Board voted against a motion to require medication to be given to people who already had a prescription for a drug like Suboxone. Jail officials at the meeting said the motion presented logistical and legal challenges. And in Monday’s letter, the health experts said treatment should be expanded even further, to include anyone with an opioid use disorder, not just those with existing prescriptions.

“For years, we have been told that the adoption of buprenorphine [Suboxone] to treat inmates with [Opioid Use Disorder] is imminent,” the letter to county officials reads. “We can no longer afford to wait.”

The situation is ‘dire’

The situation is “dire,” the letter says and further accuses jail leaders of bypassing funding that other counties have taken up to pay for programs helping individuals continue their addiction treatment in the jail. Downs said the county is applying for a grant to help fund the jail’s program.

Drug-assisted treatment for opioid use disorder is “the gold standard” for treatment in the industry, according to a variety of experts who work to help people with addiction. In 2017, county health officials recommended that the jail adopt the treatment, because of evidence that it reduces drug use, overdoses, crime and infectious diseases.

“It would be illegal and unethical to deny someone their diabetes or heart medication when entering the jail, yet this is routinely done for people with [opioid use disorder] who are at the greatest risk of dying from overdose in the community following their release,” the Monday letter reads.

The letter says around 500 people should be eligible to receive treatment. The county did not answer questions from PublicSource about how the jail assesses whether a person has an opioid use disorder or how many people in the jail would be eligible.

The jail is working toward providing methadone but does not have the federally required license to do so, said Laura Williams, chief deputy warden of healthcare services, during the May 6 Jail Oversight Board meeting. It plans to present a request for proposal [RFP] for qualified vendors to bid to be able to provide methadone on-site. The county said the RFP is being drafted now but did not provide a more specific timeline for moving forward.

The jail also hired a substance use case manager in December to build a program to provide medicines like Suboxone and refer individuals to community providers upon their release.

Several of the individuals who signed the letter to county officials said the recent effort to supply medicine to a few individuals is not moving fast enough. Alice Bell, who serves as overdose project prevention coordinator at Prevention Point Pittsburgh, said the county has known for years that drugs like Suboxone help save lives.

“This is not something that is in dispute. The jail has not said this is a terrible idea. They said, ‘Yes, we agree, we’re going to do it.’” she said. “The issue is it’s taking forever.”

Prevention Point has put resources into creating new mobile units to help make Suboxone more easily available to people during the pandemic. “And if any of those people end up getting arrested, then it’s kind of all for nothing: They’re kicked off of Suboxone, forced into withdrawal, and have to start from scratch, if they don’t die of an overdose first,” she said.

If the county was as serious about the opioid epidemic as it was the COVID-19 pandemic, she said, it would be moving a lot faster. The difference is that the coronavirus can affect anyone, but there is still stigma against drug users. “If we really think this is an epidemic, we need to act like it’s an epidemic,” she said. “We need to move quickly and use the tools that are well documented to be effective.”

Eric Hulsey, who also signed the letter and works as a senior technical advisor in the overdose prevention program at Vital Strategies, said that incarcerated patients who take drugs like Suboxone and methadone are less likely to commit further crimes or overdose once they leave. More than 1,000 children in Allegheny County lost a parent to an overdose between 2002 and 2017, according to a research letter Hulsey published in the Journal of American Medical Association - Pediatrics. Hulsey said his involvement in the letter campaign is as a concerned citizen and not in conjunction with his job.

Formerly incarcerated people who seek treatment after being released from state prisons are often in a better place than people who come from the county jail, according to Alex Perla, who signed the letter and works as director of admissions and marketing at Jade Wellness Center, a substance abuse treatment center in Allegheny County.

Many of the state prisons, Perla said, connect the individuals to therapists and follow-up treatment, in addition to stabilizing medications like Suboxone. But many of the people who were forced to detox in jail, never even show up to their appointments after their release, Perla said.

“There are systems doing it and they are doing it well,” Perla said. “We are not creating a wheel here, we just have to adapt it to our own jail population.”

At Thursday’s Jail Oversight Board meeting, jail officials outlined the plan for expanding its medication assisted treatment program and explained some of the challenges that have kept them from offering treatment to everyone who needs it. The board voted down a proposal to immediately expand the treatments because of logistical and legal hurdles.

During the meeting, board member Bethany Hallam introduced a motion to expand the use of medications for opioid use disorder to anyone who has it already prescribed to them. The jail has a contract with Tadiso, an outpatient opioid treatment facility in the North Side, which enables the company to provide methadone to people at the jail. In the past, the recipients have been limited to pregnant women.

Hallam’s motion was in part prompted by a letter from the PA Institutional Law Project about a 71-year-old man who was denied methadone while in jail.

At the March board meeting, Hallam urged jail administration to move faster to expand treatment to everyone who needs it. “To know that there are people going through this right now, month after month after month, and we say ‘Oh it is in the works.’ The RFP still has not gone out,” she said.

Williams said the motion to immediately expand treatment would present logistical challenges, such as requiring the jail to renegotiate its contract with Tadiso and hiring additional staff to provide required accompanying counseling services.

“My heart is there,” said board member Terri Klein, who abstained from voting.

“I think it’s the right thing to do, but I am so conflicted if we can’t implement it the way the regulations state.”

Advocates and health providers have fought to provide medicines like methadone and Suboxone at the jail for years. Nurse practitioner Allie Palm, who signed the letter and worked at the jail in 2016, said she pushed to provide naltrexone to individuals with opioid use disorder but was met with resistance by other medical staff. “It was just a fighting battle,” Palm said.