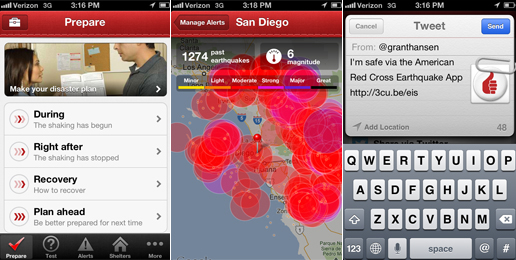 After 150 small earthquakes shook Oklahoma recently, the Red Cross is offering a free earthquake app to the state’s residents. According to a recent Al Jazeera article, the app notifies users of earthquakes and allows them to monitor activity around places their friends and family live.

The U.S. Geological Survey (USGS) said their studies show the average number of earthquakes of magnitude 3.0 or larger annually in Oklahoma jumped from three between 1975 and 2008 to 40 from 2009 to mid-2013.

The USGS analysis suggested that wastewater disposal from oil and gas fracking — instead of the process of fracking itself — could be a contributing factor to the increase in earthquakes. Other scientists have echoed that theory.

Since 2009 in Oklahoma, alongside earthquakes, the volume of wastewater injected into underground disposal wells had risen – up 50 percent in 2012 from the level seen during most of the 2000s.

In September, PublicSource wrote about residents who proposed a ban on fracking and wastewater injection wells in Youngstown, Ohio, after nearly 100 small earthquakes rocked the city from 2011 to 2012.

Much of the fracking wastewater produced in Pennsylvania ends up in injection wells in Eastern Ohio.

The Youngstown residents were unsuccessful in pursuing a ban on fracking and injection wells during a November vote.