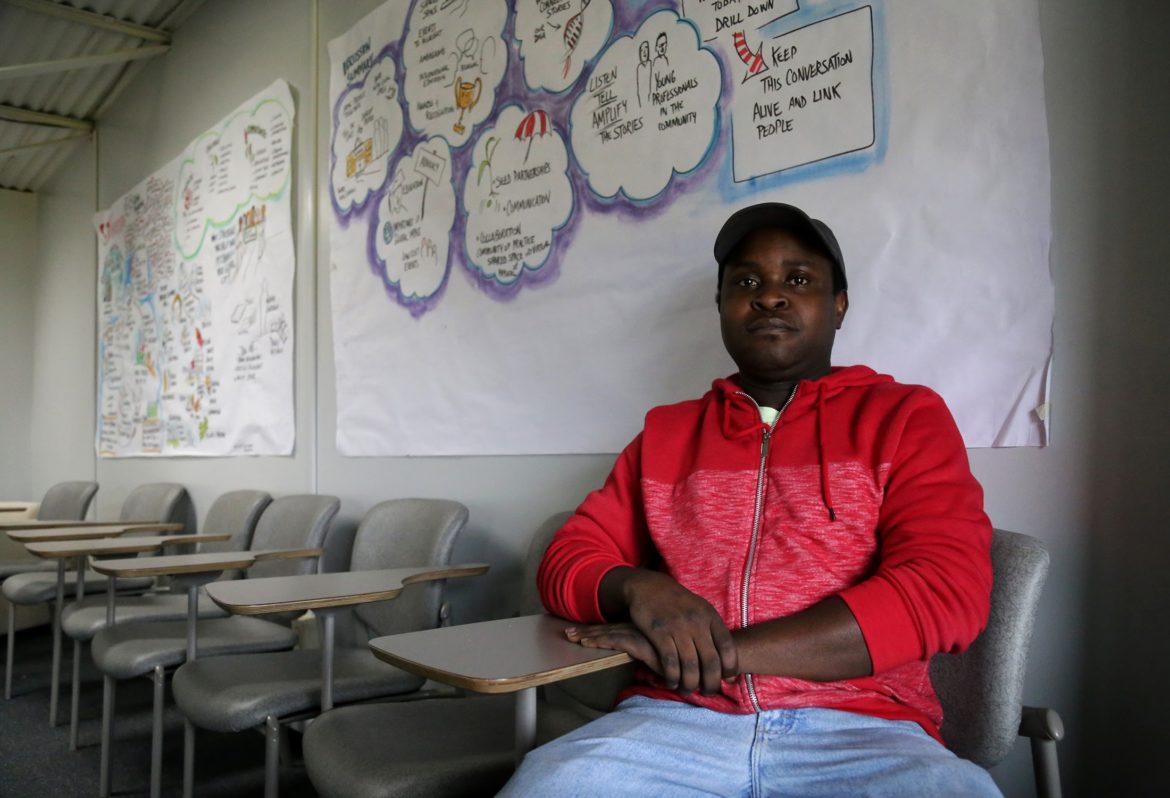 Omar Muya, 33, of Penn Hills, is a refugee from Somalia who arrived in the United States in June 2004. When he first arrived, Muya took advantage of the Medicaid provided to refugees to get them started. (Photo by Guy Wathen/PublicSource)

Man Biswa was lost and confused. Having moved to the United States from a Nepali refugee camp about a year before, the 35-year-old was struggling to communicate with nurses and doctors in a Pittsburgh-area emergency room.

Would his girlfriend’s Medicaid cover the visit? They couldn’t have waited. She was throwing up blood. But Biswa, a Bhutanese native who is still adjusting to American life, didn’t have the English skills to ask anyone the question.

Flummoxed, Biswa is still working out whether — and how — he’d pay it. He’s one of the thousands of Pittsburgh-area residents who have landed in the city as refugees, often fleeing the violence of war and at times having lived in desolate refugee camps with scant resources for much of their lives.

And these newcomers bring their own languages, cultures, traumas and attitudes toward health care with them, creating a unique challenge for the providers and organizations that serve them.

And with the advent of Donald Trump’s presidential administration, which is intent on dismantling the Affordable Care Act (ACA), widely known as Obamacare, on which many of them rely, Pittsburgh’s refugees have yet another hurdle with which to contend.

Under the ACA, those who come to the United States as refugees have the same rights to health care as any American citizen.

The ‘ifs’ of losing Obamacare provisions

When Omar Muya first came to Pittsburgh, he was about 20. He thought health care would be free.

In the rural village where he grew up in his native Somalia, no one went to the hospital unless they were dying, partly because medical facilities were so far away and expensive.

So, homemade herbal “cultural medicines” filled the void to address every ailment.

But after fleeing a devastating civil war in Somalia and ultimately coming to Pittsburgh by way of a Kenyan refugee camp in 2004, Muya found medical services were expensive, too.

When he first arrived, Muya took advantage of the Medicaid provided to refugees to get them started. Refugees are entitled to eight months of the medical benefit. Now a technician at Carnegie Mellon University, the Penn Hills resident gets health insurance for himself and his family through his job. Omar Muya became a U.S. citizen in December 2009 and works at Carnegie Mellon University. He has health insurance through CMU, but says its cost takes a chunk out of his paycheck. (Photo by Guy Wathen/PublicSource)

It’s still tough, though, with the cost of his insurance claiming a significant portion of each of his paychecks.

“This number just keeps increasing and increasing, and then at the end of the day, it’s just a lot of money,” Muya said.

Others in Pennsylvania have been able to apply for the Medicaid under the expansion Gov. Tom Wolf accepted from the federal government two years ago.

And that’s the aspect of the ACA that some who work closely with refugees are most worried about losing if Republicans keep their promise to eliminate or drastically change the law, which has made health care more accessible for millions of Americans and new residents.

Leslie Bachurski, the director of Consumer Navigation & Organizational Development at Pittsburgh’s Consumer Health Coalition, which helps to connect people with health care, said most of the refugees the organization serves are on medical assistance.

“These are working families,” she said of the refugees she works with. “Oftentimes, both the husband and wife are working jobs where, unfortunately, they’re not offered coverage, so it’s something that they really depend on.”

And there could be a negative outcome for some of the facilities that serve this population if they were to lose their health care as well.

The Squirrel Hill Health Center provides initial examinations to new refugee arrivals to the area, as well as comprehensive medical services to anyone, regardless of ability to pay. The whole enterprise is buoyed by a mix of private insurance, direct funds and Medicaid, CEO Susan Friedberg Kalson said.

And having patients who receive Medicaid is a vital component of making this possible.

As a whole, Pittsburgh has welcomed more than 500 refugees each year since 2012, said Kheir Mugwaneza, director of the Refugee Resettlement Program at the Northern Area Multi-Service Center. The organization was responsible for helping to acclimate 259 of the 651 who arrived to the city in fiscal year 2016 — a task that requires a lot of “hand-holding” at first.

The most recent arrivals hail from countries like Nepal, Syria, the Congo and Iraq.

Jewish Family & Children’s Services, another Pittsburgh resettlement agency, provides ‘intensive case management’ at first. “You really have to connect the dots,” said Leslie Aizenman, the agency’s director of refugee and immigrant services. Then, other organizations are looped in and help to coordinate services and volunteers.

Clients need assistance doing everything from scheduling the appointments, because of their limited or nonexistent English skills, to deciphering the bus system to get there on time. They’re also looking to find housing and jobs.

Daborah Ngong gave birth to her first baby in a refugee camp in Kenya in 2007, and moved to Pittsburgh in 2009. She is pregnant again, and the baby is due June 15. On a Friday morning in early February, she attended a 21-week checkup at the Jefferson Hills outpatient building in Brentwood.

Her husband, Guor Ator, kept track of the pair’s two youngest children as Dr. Eric Lantzman, an OB/GYN with the Allegheny Health Network, talked to Ngong about how often she should feel her baby moving in a few weeks’ time. She’s a pro, though — the baby will be the Whitehall resident’s fifth.

And just like with all the rest, she’ll opt for an unmedicated birth. With Ator — who’s been in the United States since 2001 — helping her translate, Ngong explained that in Kenya, where she had lived to escape civil war in her native Sudan, drugs to ease the pain of childbirth weren’t available. And she doesn’t need them now. Dr. Eric Lantzman (left) speaks to Daborah Ngong during a pregnancy check-up at the Jefferson Hills outpatient building in Brentwood on Feb. 3, 2017. Ngong, whose 1-year-old son is pictured, is a refugee from Sudan who arrived in the United States via a Kenyan refugee camp in 2009. She and her husband, Guor Ator, met in that camp in 2001. They are expecting their fifth child in June. (Photo by Guy Wathen/PublicSource)

“They’re just wonderful people,” Lantzman said of the family afterward. “… They’re just really open with their story and happy to be here and appreciative of their care.”

It’s typical for refugee patients to be fastidious about their care — in many of their cultures, doctors are akin to “gods.”

As a result, there’s a perception within some communities that “once you see the doctor, everything will be alright,” said Upendra Dahal, a project director at the Bhutanese Community Association of Pittsburgh who himself came to Pittsburgh as a refugee from a Nepali camp in 2008. This is certainly true of the Bhutanese. They are the Pittsburgh area’s largest refugee population, with between about 5,000 and 7,000 living here, mostly in the South Hills.

So, it’s essential for care providers in Pittsburgh to adjust the way they practice medicine to effectively serve patients who bring a totally different set of experiences to their examination rooms than the Americans do.

Many of the Bhutanese patients Dr. Andrea Fox sees at the Squirrel Hill Health Center there speak of a general “burning” in their bodies. The culprit doesn’t seem to be any of the usual suspects that Western sensibilities would suggest, like concentrated pain from nerve damage or hot flashes in women.

The center is still working to understand this.

To confront such cultural differences, Magee-Womens Hospital of UPMC has developed programs to encourage the area’s refugees to participate in their health care,  outreach coordinator Kesi Howard said. Creating a sense of togetherness and cohesiveness helps. For example, the hospital reworked its free breast health screenings service to mimic a support group, so they could come and learn and experience the testing together, she said.

She noticed that refugee and immigrant patients and their partners weren’t attending the hospital tours offered to anyone planning on giving birth there, even when they could be hooked up with individual translation services. So, Magee started “International Hospital Tours,” which made tours language-specific for the Nepali-speaking Bhutanese, and other international patients who speak Spanish and Arabic, with more languages in the pike.

In both cases, participation shot up.

Beyond dollars and cents

One of the most pervasive hurdles to health care for refugees is communication.

Howard said Magee employs a few forms of interpretation to overcome the language barrier: three-way phone calls among the patient and doctor in the room and an interpreter, a Skype-like meeting with a video remote interpreter and, when possible, an in-person translator.

Oftentimes, though, the translation leaves non-English speakers feeling as though they did not get their point across adequately. And although all federally funded institutions are required by law to provide translation services, they’re expensive. Fox said they often cost as much as the appointment itself, and make it twice as long.

One of the most pervasive hurdles to health care for refugees is communication.

“Doctors should not assume that the refugees would be able to tell the medical history of their past, or use appropriate terminologies to describe their illness, because even if there is a terminology in their own language, when you interpret it it sounds [like] something weird or different,” Dahal said.

Above all, working to ensure that refugees who come to the United States can access health care is not just the country’s moral responsibility, but it’s also practical, said Lantzman, the doctor in Jefferson Hills.

Making sure that all people have preventative care makes more sense than dealing with issues that arise when people don’t have access to care, he said.

"If the concern is paying for Medicaid versus emergency room care and NICU care and all these other things, I know the money is better spent on primary and preventative care than it is on the back end,” Lantzman said. “... And that’s not even taking in the human aspect of just treating people well who are parts of our country and live here now.”