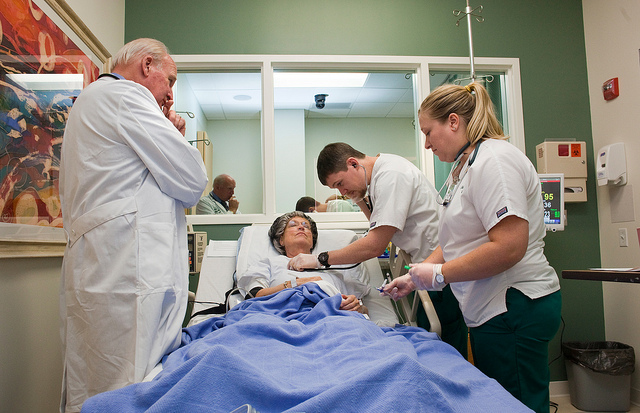 Jobs in nursing are proving to be even more perilous than working in the construction or trucking industries, and most healthcare facilities are doing little to prevent the trend, according to a NPR investigation.

Every year, more than 35,000 nursing employees experience injuries that prevent them from working, and nursing assistants — whose jobs include bathing, clothing and transporting patients — suffer the highest number of injuries of any occupation, NPR found in data from the Department of Labor’s Bureau of Labor Statistics.

Most of these injuries happen in the course of moving or lifting patients. The injuries can be career-ending, and they often happen to people who are fairly young, according to an official from the U.S. Occupational Safety and Health Administration [OSHA].

Studies by university and government researchers began to show decades ago that the traditional way hospitals and nursing schools teach staff to move patients — bend your knees and keep your back straight, using "proper body mechanics" — is dangerous.

"The bottom line is, there's no safe way to lift a patient manually," says William Marras, director of The Ohio State University's Spine Research Institute, which has conducted landmark studies on the issue. "The magnitude of these forces that are on your spine are so large that the best body mechanics in the world are not going to keep you from getting a back problem."

A small number of hospitals have reduced injuries by using machinery to lift patients, but addressing the problem of injuries among nursing staff has not been a priority for most healthcare facilities.

The OSHA official told NPR that the agency’s hands are tied as far as requiring hospitals to put more protections in place for nursing employees. Congress and court precedents have limited OSHA’s power in that regard, he said.

Ten states, including California, New York and Maryland, have been able to pass laws with protections for nursing employees. The laws specifically address the procedures for how nurses are to transport patients. Pennsylvania does not have a similar law on safe handling of patients.

[Carla Luggiero, chief lobbyist for the American Hospital Association] hesitates when asked whether she views injuries among nursing staff as an important issue.

"Well, you know, I do think it's an issue we have to ... look at. Do I think it's the most important issue we have to look at? No, I don't," she says. "I mean, we are concerned. We want to make sure our employees are in the best shape possible. So you, know, to that extent... do we care about the issue? Of course we do."