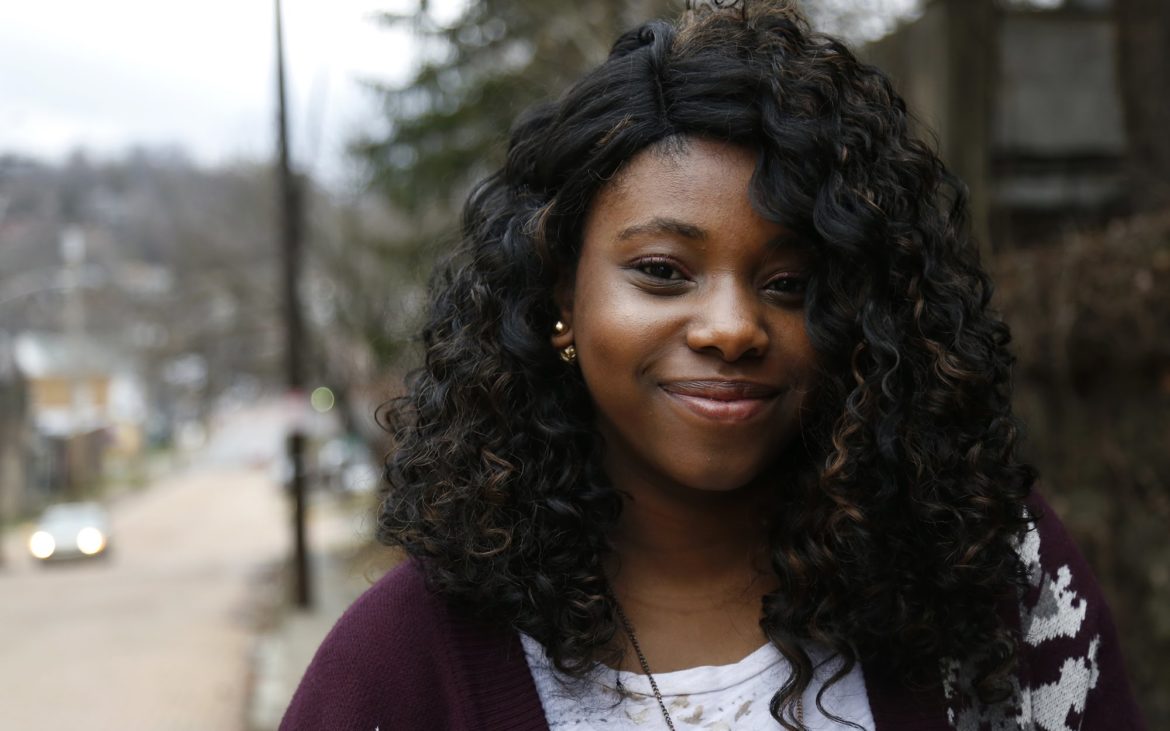 Hannah Watkins is a 16-year-old in the 11th grade at Woodland Hills High School. (Photo by Ryan Loew/PublicSource)

Growing up in Wilkinsburg, I shared a small 2.5-bedroom, 1-bath house with five siblings and two wonderful parents. We lived full energetic lives, and it was great. We would go on long strenuous bike rides from our home in Wilkinsburg to downtown Pittsburgh when I was 5. I had a playful childhood.

I was very young at the time so I did not see a problem with where I lived. Almost all of my memories were happy ones that I would not choose to forget — even the memories of slobbering dogs chasing me and my siblings down the sidewalk and into the comfort of our home.

It was not a crystal castle, but back then I wouldn’t have known the difference. It was my fortress, and the love and care that my family poured into each other blocked out the violence and negativity that surrounded us.

Though I was about 6 when we left Wilkinsburg, I haven't forgotten what it was like to hear gunshots and put the “down on the floor” drills my father taught us into action. Some of the kids we knew growing up in Wilkinsburg were not as fortunate. Not all of them had the chance to go to high school or graduate, and they are still mourned.

Ten years ago, my five siblings (David, Sarah, Benjamin, Joseph, Deborah) and two wonderful parents (Rue and Cecil Watkins) moved to Wilkins Township for a few years and then to Forest Hills. Forest Hills is a suburb of Pittsburgh about 2.5 miles from Wilkinsburg. Even though the two neighborhoods are so close together, they’re drastically different. Where I live in Forest Hills, it is a nice, quiet place. I’m able to go outside and relax in the yard whenever I feel like it. I do not have to worry about loose dogs or stray bullets.

My friend Donna Simpson still lives in Wilkinsburg. I met Donna years after leaving Wilkinsburg when our families began attending the same church. Our church borders Wilkinsburg and is on the outskirts of Homewood.

Donna is 14 and attends Propel Braddock Hills. When she was younger, Donna went to an elementary school with a reputation for violence between the students and between the students and their teachers. The students who attended seemed to be held at lower standards than students from other schools, even if they did not take part in the stereotypical violent behavior. Donna is a straight-A student and, despite what people think about where she grew up, she is just as intelligent as the students who grew up in rich neighborhoods, if not more so. 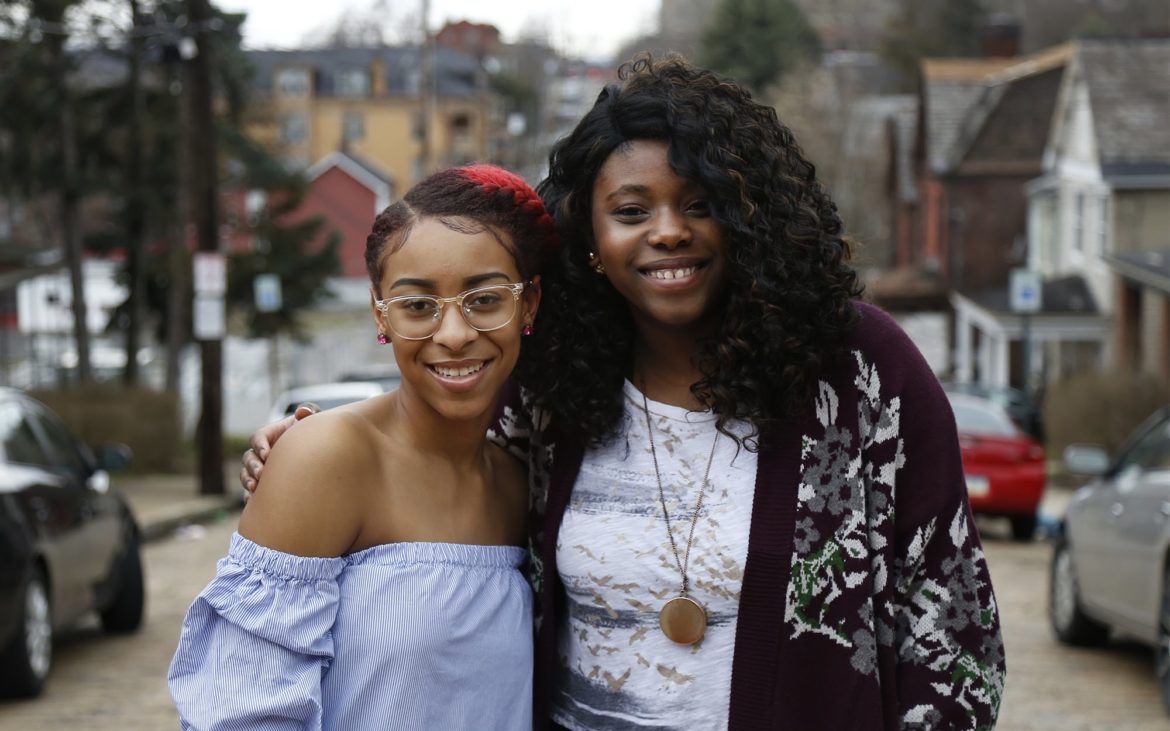 Donna talked with me about the positive aspects of living in Wilkinsburg. She said, “If you ever need anything, everything is in walking distance.” This is important in neighborhoods such as Wilkinsburg because it creates a bond between the people of the community and local store owners, she said. The store owners know who will come to their shops, so they know what to stock their stores with. It benefits both the shop owners and their customers.

Donna and I also discussed how the librarians know the kids who stop by and what they’ll be looking for, so they are able to create programs that interest the kids. Their awareness and other actions like this help the community come together to change for the better.

Donna did have some ideas for improving Wilkinsburg. She said she would like to clean up the neighborhood. If people walking down the street would pick up a candy wrapper or a plastic bag floating around, then maybe other people would see that example and do the same.

Donna also hopes that more opportunities would be offered to kids living in Wilkinsburg. She said she would not hesitate to take action if there were a program for her to join, or even to start, that would help improve her community.

It’s clear to me that Donna cares about Wilkinsburg and wants the best for those around her, and even if you do not live in Wilkinsburg or a neighborhood like it, you should still fight for those who do live there. Wake up and consider what someone else's life is like in another neighborhood, another city, another country or another continent.

All too often we forget how blessed we are to be who we are, and the benefits that come with living in the United States of America. Of course, there is always room for improvement and room for change. We decide whether or not we want to improve or change. As individuals, we have a responsibility to take actions that advance our lives and the lives of everyone around us. If we only focus on our own success and what “I wish to become when I get older,” we forget where we are and how much good we can really do. We forget about where we come from and who fought and died for us so that we could live better lives. 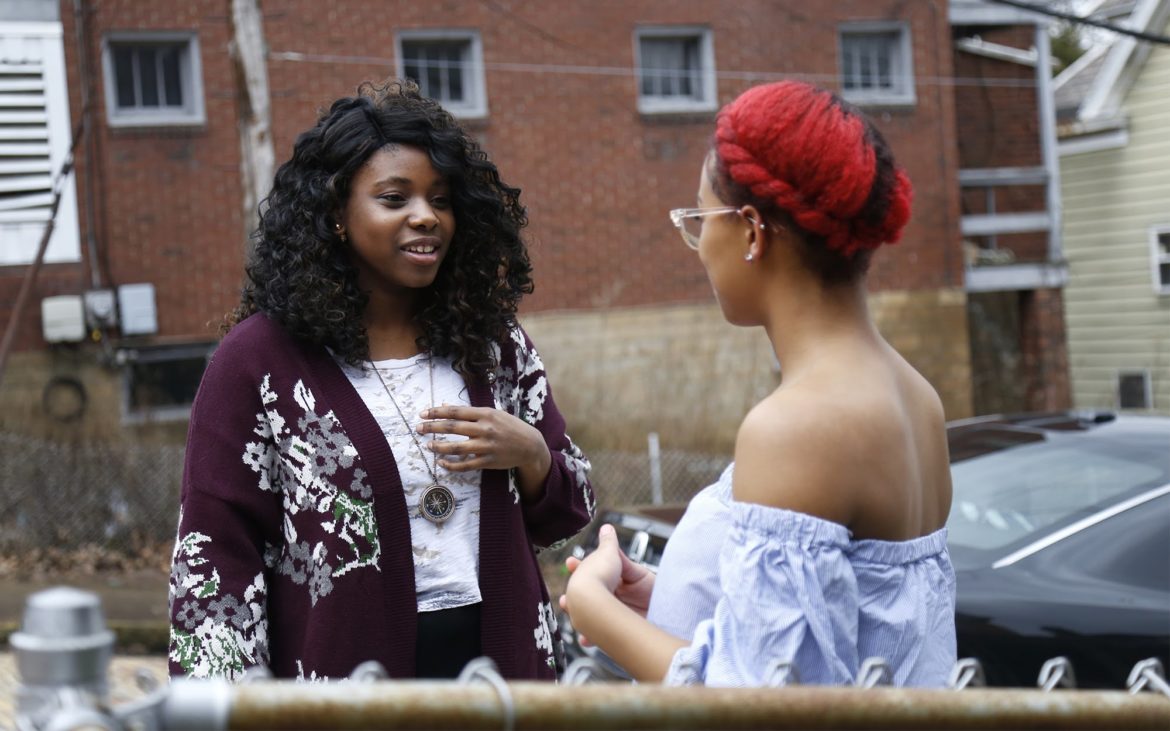 When we are adults, I hope to see some of the people I grew up with in Wilkinsburg. I’d like to see Wilkinsburg flourish. It will certainly take a lot of effort but there are so many good people living there who would agree that it is a beautiful borough.

Just like many other communities, Wilkinsburg has its issues and things that need to change. When we put our minds and ideas together, I do not doubt for a second that Wilkinsburg can become a better place — a safer and cleaner community where kids can continue to play games in their yards and parents don’t have to worry about stray bullets or loose dogs. Because they will know Wilkinsburg is a better place.

Hannah Watkins is a 16-year-old in the 11th grade at Woodland Hills High School. She can be reached at hannahrwatkins@gmail.com.

One thought on “My family left Wilkinsburg. But it’s still our community, and I hope it flourishes.”