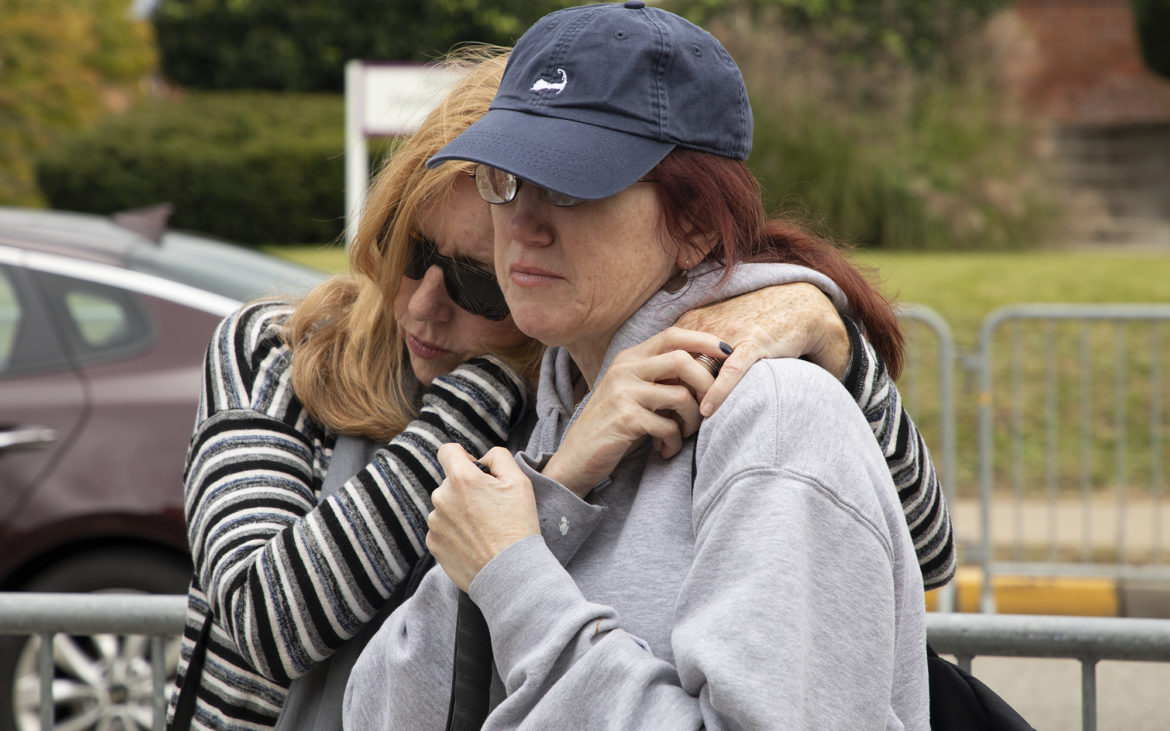 Jane Yallum (left) holds onto her younger sister, Kara Snyder, as they visit the memorial at Tree of Life. (Photo by Kat Procyk/PublicSource)

Kara Snyder wanted to put a rock on each star at the Tree of Life synagogue. Her older sister, Jane Yallum, helped her.

Snyder, 52, of Squirrel Hill, is legally blind and described her vision as blurry. She could see only the point of each star, memorializing the 11 victims of the shooting. Yallum, 57, of Shaler Township, described the scene in detail during their Wednesday visit, so Snyder could visualize it.

“Now I know the splotches of color are the flowers, and it looks really beautiful,” Snyder said.

Yallum is mourning alongside her sister.

“Just had to be here,” Yallum said. “Had to just come and pay our respects, mourn the state of humanity and especially what’s going on right here in Squirrel Hill.”

The sisters grew up in Squirrel Hill and said it was their “stomping ground.” Neither were born into Judaism, but Snyder converted in 2003 after studying the religion for six years.

Yallum was overseas when she heard the news of the shooting at a Squirrel Hill synagogue. She didn’t know which synagogue it was and feared for her sister’s safety. Snyder is a member of another congregation, but had been to Tree of Life on multiple occasions. 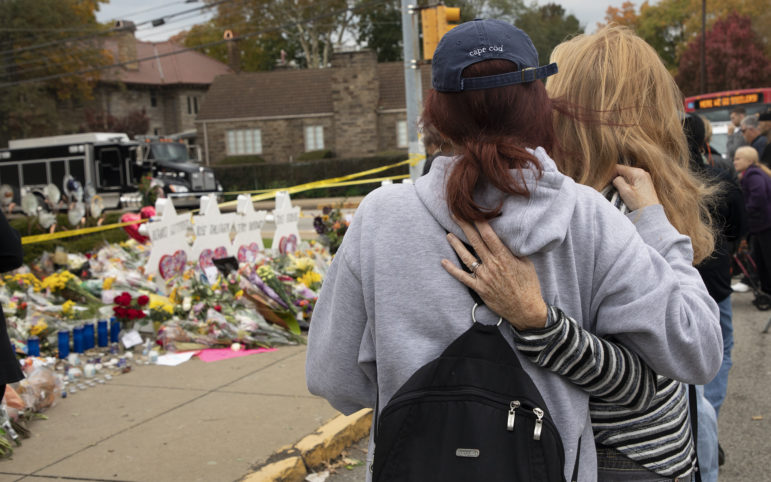 Kara Snyder (left) and her sister, Jane Yallum, placed rocks on each of the memorials dedicated to the 11 victims of the Tree of Life shooting. (Photo by Kat Procyk/PublicSource)

Snyder brought rocks to be put on each star, which is an ancient Jewish tradition. Two of the rocks they laid down are from the Jordan River in Israel. She chose to place those rocks on the memorials for victims Bernice and Sylvan Simon because they were close to her sister-in-law.

She also brought shells from Cape Cod and stones from Massachusetts she had collected during travels because she wanted each piece she left to be personal.

Snyder said she was surprised by the emotions she was feeling at the Tree of Life.

“I do feel a very calm, peaceful energy here and that took me by surprise,” Snyder said. “I thought I might be thinking about the horrific part of it but I feel a real sense of peace.”

Kat Procyk can be reached at kat@publicsource.org.