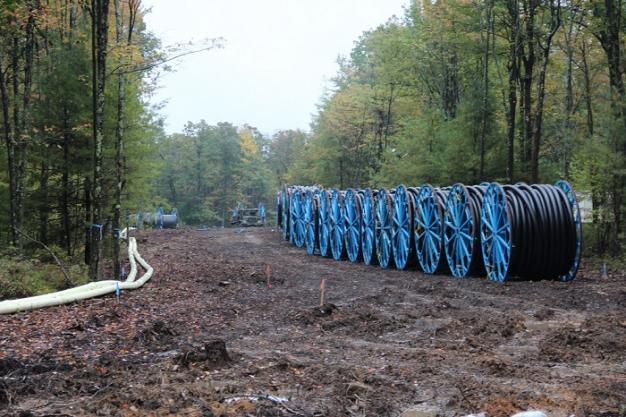 In February, Governor Tom Corbett announced his intention to balance the state budget, in part, using millions of dollars in projected revenues from new oil-and-gas drilling leases in state parks and forests. It was the first public acknowledgment of Corbett’s plans to lift a 2010 moratorium on leasing.

But records uncovered in an investigation by 90.5 WESA and the Allegheny Front suggest the issue may have been under active discussion much earlier.

In February of 2012, state lawmakers had energy policy on their minds, as they rushed to vote on Act 13 – the landmark Marcellus Shale drilling law – ahead of budget season. The dust had not yet settled on that process when budget hearings commenced in mid-February. Lawmakers wanted to know how state agencies’ bottom lines would be affected by the impact-fee legislation, and by the governor’s budget plan.

For the Department of Conservation and Natural Resources (DCNR) – funded in part through drilling royalties – there was concern about future fiscal pressure to award new leases in state parks and forests.

“Because of the moratorium in effect,” Allan said, “we are not addressing any discussions in regards to additional leasing now.

Two weeks later, before the House Appropriations Committee, Allan was again asked about the prospect of future leasing, and again he denies it’s even under discussion. This time, Representative Greg Vitali (D-Delaware) cited a newspaper article in which a Corbett spokesman seemed to indicate that the governor was indeed weighing that possibility. Asked to share what he may know about any such deliberations, Allan was unequivocal.

“To my knowledge, that statement is incorrect,” Allan said. “I had inquired about that. But my personal knowledge is that we are not discussing additional leasing in state forests.”

But calendar listings for the previous month show Allan scheduled for a series of meetings explicitly pertaining to the moratorium.

One listing, which names a staffer from the governor’s office as contact person, is labeled “meeting w/DCNR staff re: state forest leasing moratorium.”

That was on January 11th, 2012 – just five weeks prior to Allan’s Senate testimony. Other explicitly moratorium-related discussions preceded it, going back to November.

In a phone interview, Allan offered a simple explanation: those meetings were not about making plans to lift the moratorium but, rather, about how best to uphold it. Allan said he regularly fielded questions from leaseholders who wanted to revise their existing contracts to expand or relocate drilling operations. Where such requests were deemed to conflict with the moratorium, he said, they were rejected.

Allan said he was being truthful when he testified he had no knowledge of any discussions about lifting the moratorium, because only the governor had the authority to do that. But he repeatedly declined to elaborate on whether his discussions with gas companies or lobbyists touched on the possibility of new leases.

One piece of business involving existing mineral rights does seem to dominate Allan’s schedule in 2012: meetings with or about  Anadarko Petroleum, the largest leaseholder in the state forest system. Those appointments took up more than 13 hours of work time during the spring and summer of 2012. Email records from the same period show DCNR working closely with Anadarko to develop a Surface Use Agreement that would allow the company to access mineral resources it already owns beneath the state forest.

Anti-fracking groups said they were shut out of that conversation over Anadarko’s plans to develop a section of ecologically sensitive land in the Loyalsock State Forest. George Jugovic, chief counsel for the environmental watchdog group PennFuture, says DCNR has withheld both access and information about the proposal. In fact, Jugovic says his group’s only opportunity for face-time with Allan was at a public meeting on the matter.

“We have not found the agency to be particularly open or responsive to our requests in general,” Jugovic said.

If the 2012 budget hearings were any indication, lawmakers had concerns about increasing interdependency between industry and regulators. Notwithstanding Allan’s efforts to allay those concerns, the records show a department deeply engaged with oil and gas companies on leasing issues, in ways seldom seen before the shale-drilling boom came to Pennsylvania.

But to really understand the relationship that now exists between DCNR, industry, and the environmental community, you first have to understand how the agency itself has changed. To that end, let’s flip the calendar pages back a few more years, to 2008 and the administration of Democratic Governor Ed Rendell.

Michael DeBerardinis was DCNR Secretary at the time, and John Quigley was his deputy. Quigley, who would later take over the top post at DCNR, is outspokenly critical of Governor Corbett’s energy policies, and supports his Democratic challenger, Tom Wolf. But even Quigley acknowledges the leasing issue is not readily reducible to party politics. He remembers the bipartisan feeding frenzy that ensued in 2008 when DCNR auctioned oil and gas leases for 74-thousand acres of state forests.

“When the first bid was opened, I think it like $30 million,” Quigley said. “And my heart was in my throat. I actually texted Sec. DeBerardinis and said ‘we’re in trouble.’”

To put that figure in perspective: the entire history of natural gas leasing on public lands in Pennsylvania, dating back to 1945, had up until then yielded a grand total of just $155 million dollars. By the time the bidding was over on that day in 2008, bidding for the new leases alone totaled $190 million.

“We exceeded the fifty-year take in the Oil and Gas Lease Fund in three hours,” Quigley said. “That was the opening of Pandora’s box.”

From then on, DCNR would never be the same. Facing massive budget shortfalls at the onset of the Great Recession, state government was desperate to cash in on royalties. Under pressure from a Democratic governor and a general assembly evenly split between the parties, the department was being ordered to generate an additional $180 million dollars from state forest leasing.

“It was like getting punched in the gut,” Quigley said. “Because I knew that the agency was now going to be cast in a completely different light. Instead of being the stewards of natural resources – the trustee of public lands – we were going to be cast not as the stewards, but as the bankers.”

By the end of Ed Rendell’s term as governor, natural gas companies had secured drilling rights on a total of 700,000 acres – approximately one-third of the entire state forest, all told. DCNR research concluded that any further development would lead to serious and possibly irrevocable ecological damage. Based on that analysis, Quigley says, he persuaded Rendell to issue an executive order barring new leases that would involve “surface disturbance.”

Governor Corbett issued an executive order in May overturning the moratorium in order to generate 75-million dollars from new leases on 25,000 acres. This time, state park lands are eligible for leasing along with state forests – something Richard Allan vehemently denied was under consideration in 2012.

The gas would be extracted horizontally from well pads sited on adjacent, private land. Corbett’s order retains the prohibition against additional surface disturbance though the interpretation of that phrase is under dispute. DCNR says it would exclude construction of some new infrastructure – including roads and pipelines – but not other impacts like traffic, noise, or air pollution. It would also permit new gas wells to be drilled on existing wellpads, and new wellpads to be built on land already leased.

With hindsight, Quigley believes the language in the moratorium was much too loose.

“It’s not just surface disturbance,” Quigley says. “The agency was focused on that because that was our experience with shallow gas. But with shale gas development there are noise impacts, there are air pollution impacts, the threats of spills… none of those know borders.”

Citing those concerns, the Pennsylvania Environmental Defense Fund is seeking a court order to halt the new leases. The administration has agreed to put those contracts on hold pending the outcome of the lawsuit, which will be heard next month in Commonwealth Court.