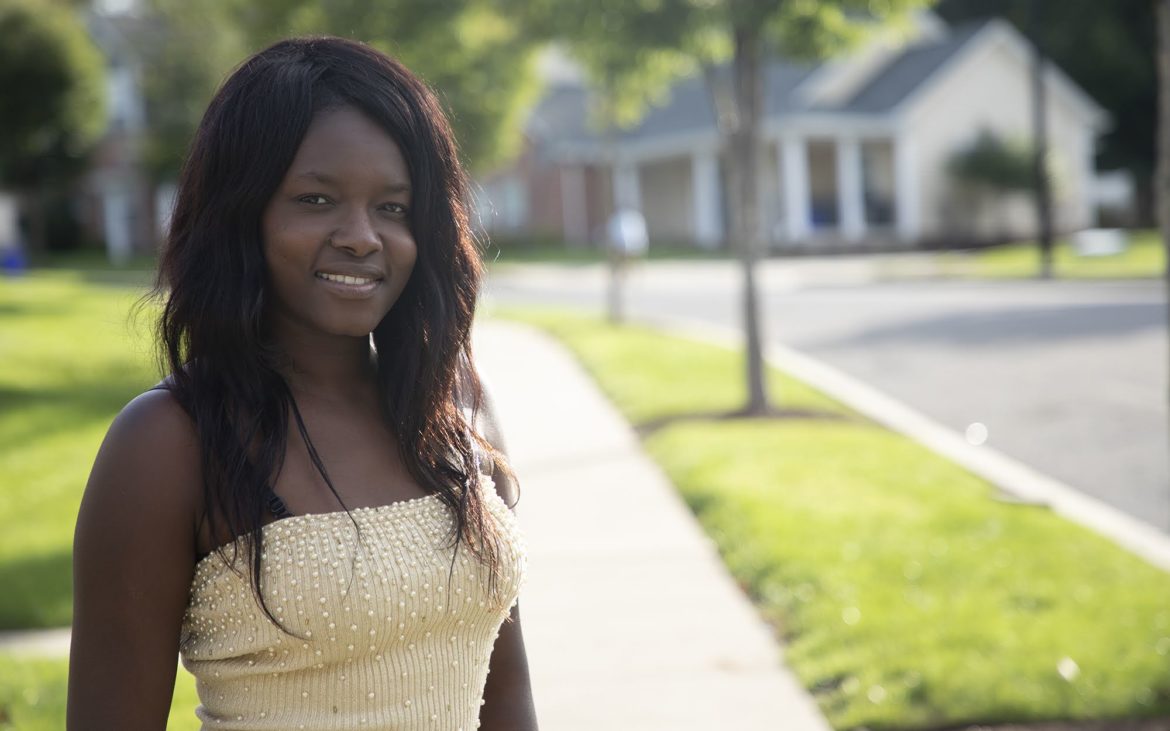 Mircalene Valcin, 24, outside of her Garfield apartment. (Photo by Kat Procyk/PublicSource)

Mircalene Valcin’s biological father did not know of her existence until she was 17 years old.

She grew up on a farm in Cerca-la-Source, Haiti, with her stepfather and mother, the oldest of five children in the household. They were better off than some in the  country, with food picked fresh from their gardens.

When Valcin was about 10, she became ill with what she suspected was yellow fever. She was turned away from an overcrowded hospital after waiting all day. Valcin said it is a common belief that knowing a doctor or a nurse at this hospital would have increased the likelihood of prompt treatment.

Her experience led to a vow.

“God, please, I’m not going back to the hospital, and I’m not gonna die,” she prayed. “When I grow up, I want to be a nurse so I can help myself and then help my family and others.”

A meeting with her biological father years later set her on a journey that brought her to the United States in 2013, where she is pursuing a nursing degree to fulfill her pledge.

“When I grow up, I want to be a nurse so I can help myself and then help my family and others.”

The transition to life in America was anything but smooth. Over the next three years, she would find herself being cast out by family members she hardly knew in a foreign country with an unfamiliar language.

Valcin experienced a form of homelessness called “doubling up” – living temporarily with friends or relatives. Doubled-up young people have low rates of graduation and a high incidence of mental health disorders.

She beat the odds when she earned her high school diploma in 2016 and an Associate of Arts certificate in general studies from the Community College of Allegheny County in May.

Now 24,  Valcin plans to begin nursing school at CCAC in January 2019 after completing her pre-nursing courses and passing an acceptance test. Valcin never wants anyone to be turned away from medical care, and she wants to help as many people as possible. 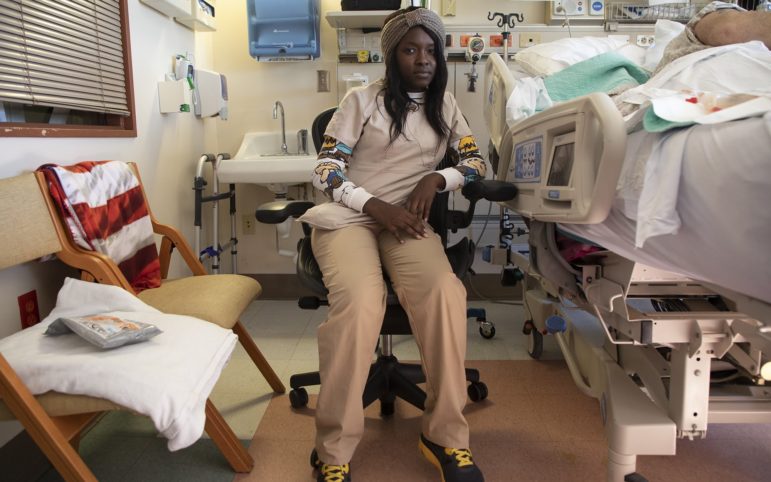 Mircalene Valcin, who is pursuing a nursing degree, sits with a patient at the Veterans Affairs Pittsburgh Healthcare System. (Photo by Kat Procyk/PublicSource)

“I’m going to be a nurse, in Jesus’ name,” she said, punctuating the statement with the brief prayer, as though it was a period at the end of her sentence. “I believe that.”

Young people who are doubled up have lower high school graduation rates than those who live in shelters, according to Carlos T. Carter, executive director of the Homeless Children’s Education Fund [HCEF] in Pittsburgh.

“They’re feeling unwanted. There’s no stability,” he said. “At any minute, you can be thrown out — at any time, and you know that.”

According to a 2015 study from the Institute of Children, Poverty and Homelessness, 68 percent of New York high school students living in shelters graduated, compared to 40 percent of their peers who are doubled up.

“At any minute, you can be thrown out — at any time, and you know that.”

“It’s the instability of the housing situation that makes [doubled-up youth] much more precarious than if they were staying in a shelter,” said Susy Robison, HCEF’s director of outreach and volunteer services.

Robison became Valcin’s mentor after she was selected as a recipient of HCEF’s Hope Through Learning Award, a grant for homeless youth pursuing higher education.

Valcin used the $2,500 grant to buy books and food, passing on a $400 Anatomy and Physiology textbook in favor of groceries.

At the time of an interview over the summer, she was discouraged after getting a C on a microbiology exam. But she completed the compressed six-week course with a B plus.

Her cluttered but colorful apartment in Garfield  has a comfortable feeling. Yet she doesn’t stay there much and doesn’t have much time to clean in between her nursing studies, work at the West Penn Hospital and the Department of Veterans Affairs hospital in Oakland, singing at church and spending time with younger cousins at her aunt’s house. 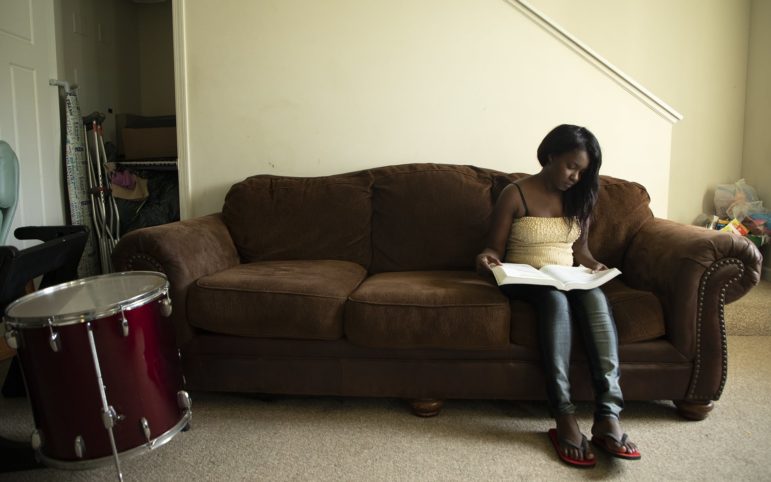 Mircalene Valcin works on medical terminology homework in the living room of her Garfield apartment. (Photo by Kat Procyk/PublicSource)

“Be careful of these steps,” she said walking up the rickety, uneven staircase leading up to the tiny studio apartment — her first permanent home since Haiti. A church owns the apartment, and Valcin pays $350 a month to stay there.

She kept the radio on but the lights off and insisted on using her own shirt to beat the dust off a chair for a reporter to sit.

“I’m just a blessed one, to be honest,” she said, accenting her unshakeable optimism with a cheerful giggle.

From a young age, she suspected her stepdad was not her father, noticing his complexion was much lighter than hers. Her mother insisted he was her dad, and Valcin chose to accept it because he cared for her like his own daughter.

“I know people who do good for me, and he was really, really good to me,” she said. “Not every man wants to take care of another man’s child.” 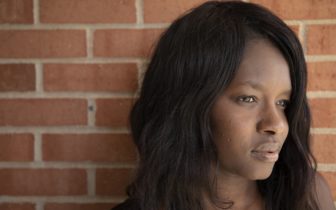 Micarlene Valcin didn't know her biological father until 2011. She eventually moved to the United States, where her father was located and worked as a truck driver. (Photo by Kat Procyk/PublicSource)

Around the time Valcin was turned away from the hospital as a child, her father moved to New Jersey with his wife and children. He was unaware he had left a daughter behind. Valcin said she’s not sure why he never knew about her, saying her family never talked about it. He eventually learned about her from his wife. Valcin was told her father did not believe he had another daughter for a long time. When he finally accepted it, with much convincing from family members, he tried to find Valcin so she could come to America.

They met in 2011 when he visited Haiti for a wedding. She saw him at the airport. He looked like her.

While he was visiting the city, Valcin was issued a new birth certificate — this one bearing her father’s name and signature. She was heartbroken when her new family left for the United States. She waited two years for a visa to join them. 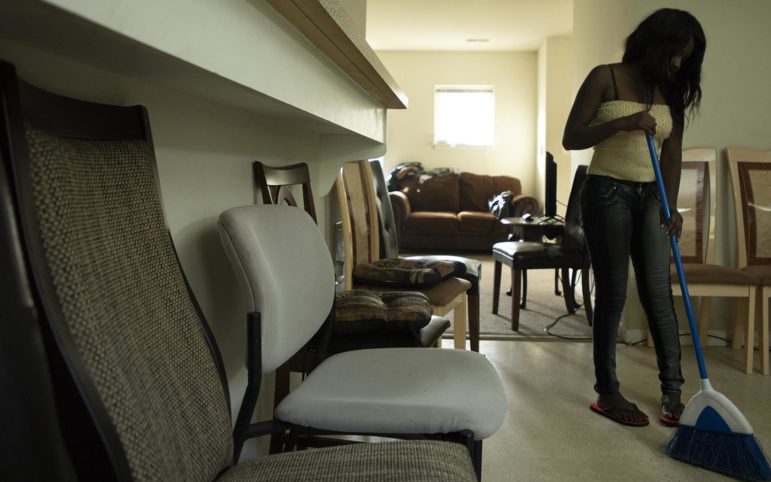 Mircalene Valcin sweeps the floor of the dining room in her Garfield apartment. (Photo by Kat Procyk/PublicSource)

In 2013, when she was nearing high school graduation in Haiti, she moved to America with her father, stepmom and their children. Because she did not know English, she was moved back to ninth grade.

Valcin regrets she never took English courses in Haiti. There was no point, she thought at the time. She was never going to live in an English-speaking country.

Her dad worked as a truck driver, and Valcin often cared for her younger siblings with her stepmom. They butted heads. After about a year, her dad told her to move to Pittsburgh with his mother, her grandmother.

She moved three times during two years of high school in Pittsburgh. For the first three months, she lived with her grandmother and five other relatives. Then Valcin moved in with her aunt. After a year or so, tensions ran high. Her dad told his sister she did not have to continue caring for his daughter.

“My dad said it’s on them if they want to keep me in their place or not. They were like, ‘What will you decide to do?’ I did not answer. And they were like, ‘Well,’" Valcin clapped her hands together to emphasize the words, "‘then get out.’”

On Jan. 31, 2017, Valcin found herself only four months from her high school graduation with nowhere to stay.

“At first, when I got kicked out, I was like, ‘Jesus, I am finally homeless because after these people I know, I have nobody else,’” she said.

She racked her brain for options of where to spend the night. She eventually turned to her aunt’s mother-in-law.

“I knocked and then they let me in. I stayed there for one and a half years,” she said. 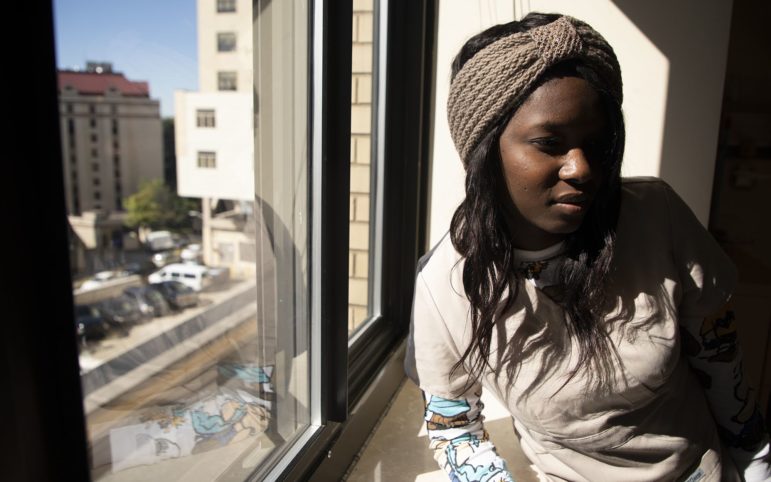 Valcin earned her high school diploma, doing homework on computers at the Bloomfield-Garfield Corporation, a nearby nonprofit community organization where she also received tutoring.

Again she faced conflicts at home, this time with a distant relative also living in the house. During her pre-nursing courses, Valcin left without a place to stay. She called Deacon John Moon of Morningside Church of God in Christ, telling him she was going to be on the street that night. He directed her to the church’s apartment, the same one she lives in now.

Valcin said she struggled when relatives she hardly knew treated her “like a kid.” When voices were raised at her, Valcin admitted, she yelled back. Now, living on her own, she maintains a relationship with her dad, grandma and aunt.

"I’m not perfect. I’m not better than them.”

In Allegheny County, 3,532 children were identified as homeless in the 2016-17 school year, according to the state Department of Education.

Homeless youth are more likely to suffer from mental health disorders, and they are four times more likely to experience developmental delays due to housing instability.

“Just imagine if you didn’t have a home, and the rug is constantly being pulled out from under you. You’re just not stable and then sometimes people still have trauma once they’re put in a home,” Carter said.

Valcin has never sought treatment for the stress she feels. She points out, though, that when voices are raised at her, she gets nervous. 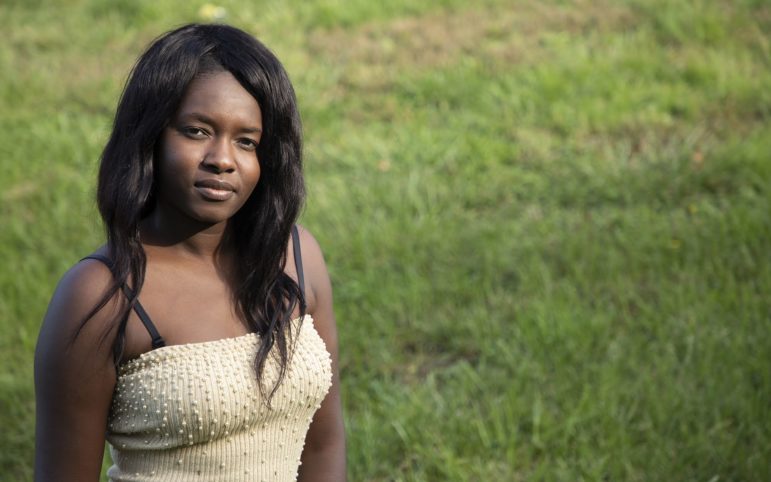 Due to her workload and home life, Mircalene Valcin says her stress levels have been extremely high.  (Photo by Kat Procyk/PublicSource)

“My heart beats so fast and then I just don’t feel good and then I have bad headaches,” she said.

Tensions  can sometimes run high when multiple nuclear families live under one roof. Immigrants are more likely to double up, with families pooling limited resources to care for one another, Carter said.

Immigrants, he added, are sometimes isolated by language and cultural barriers, often  relying on ethnic communities and family members as their means of support.

Valcin now views those life experiences in a positive light. She sees a stepdad who took care of her when he didn’t have to, a father who searched for her so she could come to America and person after person who took her in and helped her along her path.

As she pursues her nursing degree, her next goal is to bring each of her family members from Haiti to live in the United States.

Alyssa Choiniere is a journalist based in Fayette County. She can be reached at alyssa.choiniere@gmail.com.