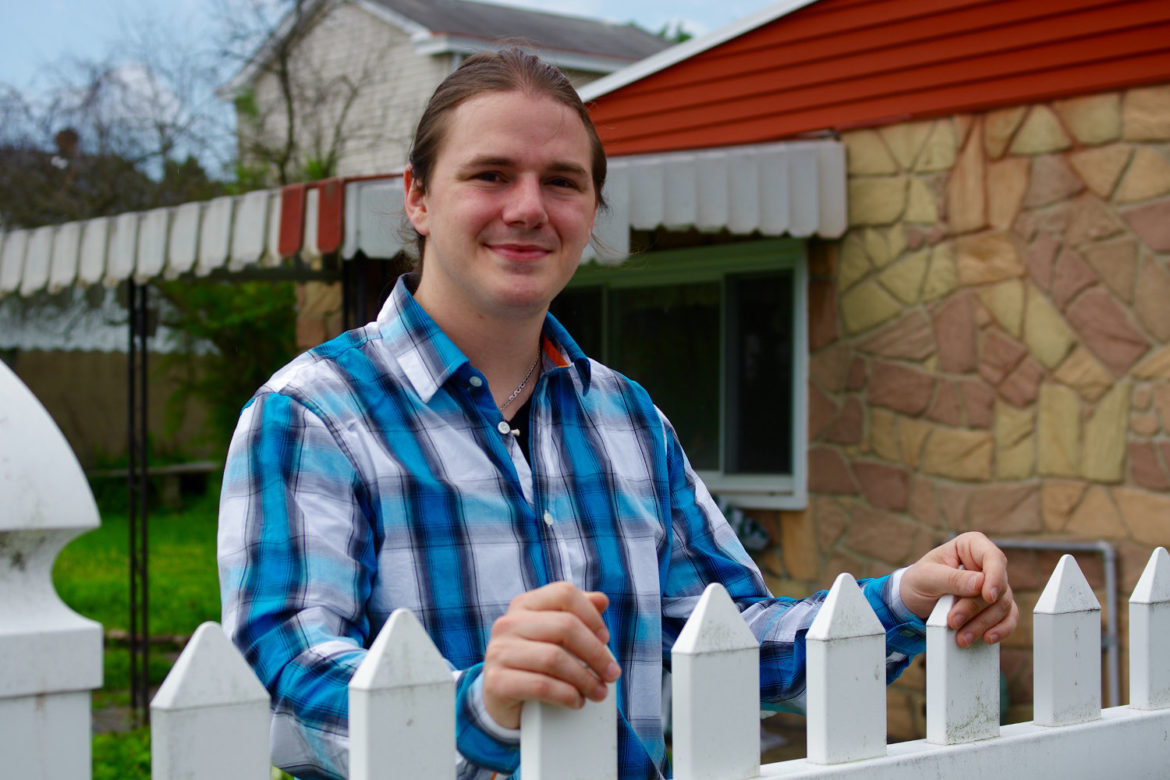 Carlton J. Brown III is about to sign off on one of the biggest decisions of his life.

The 29-year-old is buying a three-bedroom house with a yard and a two-car garage in McKees Rocks, a borough northwest of Pittsburgh. Brown, a lab technician at an oil blending plant, has been renting with friends for the past two years.

But, “I’m getting close to 30 and I felt it was time I needed to make an actual commitment to something,” he said.

“I was pretty nervous at first,” Brown said. “I only got this because, at the price, I was able to afford it by myself, but I’ll probably try to get a roommate so I can make it more affordable”.

Compared to his parents’ or grandparents’ generation, Brown is late to homeownership. But among his peers, he’s an early starter.

The Millennial generation — those currently aged 18 to 34 — is more than a fifth of the population in Pennsylvania, but accounts for little more than 9 percent of all homeowners. In 2013, of about 850,000 households in the state headed by Millennials, 39 percent of them owned their homes instead of renting.

In the Pittsburgh metropolitan area, the rates are similar: Of about 165,500 Millennial-led households, 39 percent owned their homes.

Homeownership among young adults has been on a downward trend since the 1980s, with the exception of a surge during the housing boom of the early 2000s.

Following the housing collapse, the rate plunged from nearly 44 percent in 2004 to about 35 percent in 2015, leading to speculation that Millennials would be “Generation Rent” — spurning homeownership for life.

“That changed conditions on the ground in a number of important respects," he said. For one, "it made access to high-quality and high-income jobs more scarce."

Cramer said delaying or forgoing homeownership may have ramifications later in life.

“My concern is that homeownership has been not just a place to live and a way to invest in a community, but a primary vehicle that people have used to build wealth," he said. "If that doesn’t happen or it’s delayed, then there needs to be another way for the generation to build wealth and security."

At an age when previous generations were marrying and buying their first home, today’s young adults are more likely to be single.

In Pittsburgh, most Millennials — 71 percent — have never been married. That’s a significant shift from 1980, when just 45 percent of young adult Baby Boomers were unmarried.

Another factor is that young adults today are more likely to have a college degree. In Pittsburgh, 30 percent of Millennials have a bachelor’s degree or higher — almost double the number with that level of education in 1980.

“Historically, [a college degree] was the ticket to a steady, higher paying job, but if those jobs don’t return in the economy, then wages will remain stagnant, and it will be harder for households to use their income to save for a down payment on a home,” Cramer said.

Natalia Fenton, 27, moved into her rented 2-bedroom apartment in Castle Shannon in May, about the same time she started a job as a travel consultant in Green Tree.

Fenton said she’d like to own her own home, but expects to be renting for a few years at least.

“I feel like I’m throwing all my money away renting, but with student loan debt, I don’t think I’m going to be in a position to buy a place any time soon,” she said.

For some Millennials, taking on a mortgage is too great a commitment, and freedom from debt is more important than the security of owning a home.

Samuel Polito, 26, a coffee roaster, rents in Brookline with three friends. He can’t see himself ever buying.

“They’re expensive, and you’re responsible for absolutely everything,” he said. “A 30-year mortgage that you can’t get out of, versus renting when you can get out of it any time.”

For Jesse Padjune, 22, living with family is bridging the gap until she can buy a home with her fiancé.

Padjune, a freelance copy editor who graduated from Point Park University last year, said they’d rather wait until they can afford their own place than rent.

“If I’m going to put a lot of money into it, I’d rather have something to show for it down the line,” she said.

The number of young adults living with parents has been rising over the past decade. Thirty percent of Millennials in the U.S. now live with a parent; in Pennsylvania, the rate is slightly higher, nearly 33 percent.

Cramer said living at home longer, or returning to the family home, has been a way of coping with economic necessities.

“I also think that changing attitudes and preferences of the generation is relevant here,” he said. “There were big cultural divides in the 60s with the youth culture and parents being from very different worlds. Kids today or even young adults are closer to their parents than previous generations.”

For Emily Graham, 30, and husband Kimmer, 31, moving in with Emily’s parents helped them save toward buying their Lawrenceville row house in 2011.

Emily was studying to be a pharmacist and Kimmer had just started a sales job.

At the time Lawrenceville was an affordable option, with mortgage payments cheaper than rent for a two-bedroom apartment, Kimmer said. The couple bought the house for $74,500 in September 2011, and spent about $60,000 on renovations.

“We always thought we would own,” Emily said. “There was never really a second thought. We both hated throwing rent away every month.”

Prospects for young buyers are better in Pittsburgh than most U.S. cities. Along with Allentown, Scranton, Harrisburg and Lancaster, it’s rated among the most affordable.

A Zillow report in April found Pittsburgh was tied for the 11th most affordable city in the U.S. for Millennials. The study found more than 80 percent of homes for sale were affordable for young buyers.

In recent years, a shortage of quality apartments has also driven rental prices up, making purchasing a home even more attractive.

Median rents have risen from about $800 a month in 2009 to more than $1,100, according to Rent Jungle, which aggregates online rental listings.

“What we’re seeing in the market is rents keep increasing and Millennials are getting frustrated with that,” said Reed Pirain, executive vice-president of Pittsburgh firm PPM Realty. “Especially in a market like Pittsburgh, where the average home sale is less than other markets.”

Pirain added, however, that an influx of new apartment developments in the city (such as those in the East Liberty and Shadyside neighborhoods) would change the rental market in the next few years as the supply increases.

Richard Sunseri, a 29-year-old realtor, bought a two-bedroom row house 18 months ago with his fiancée, Rebecca Levine, 25. He said mortgage payments were about the same as what he had been paying in rent.

“I thought why spend $800 a month in rent? Why not purchase a house that I build equity in?” he said.

The couple bought in the South Side, where they had rented together for four years. “I saw the market was good; it was smart for the future to buy a home down there,” he said. “Our plan is to move to the suburbs once we’re ready to settle down.”

Millennials are more likely to be urban dwellers than their parents.

According to Pew Research, 86 percent of Millennials live in metropolitan areas, compared to just 68 percent of Baby Boomers at the same age.

John Petrack, executive vice-president of the Realtor’s Association of Metropolitan Pittsburgh, said Pittsburgh has an active young buyer market, concentrated in urban areas and city suburbs. According to 2010 Census data, those areas included South Side Flats and Slopes, Central North Side, Brookline and Greenfield.

“I also see the rising awareness that Millennials have around the environment and sustainability and an urban lifestyle that’s not car dependent.”

The Grahams said they chose Lawrenceville partly for its proximity to the city, and the ability to walk to shops and restaurants. “There’s just always something to do,” Emily said.