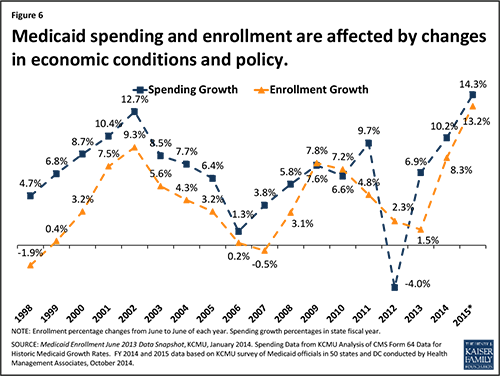 As the economy stabilizes, people enrolled in Medicaid and the physicians who provide care under the federal program are seeing more benefits, according to a Kaiser Health News report.

The Kaiser Family Foundation and the National Association of Medicaid Directors surveyed 50 states on the program that provides health insurance to about 70 million people earning low incomes.

The report found that 22 states were expanding Medicaid benefits compared to just two states restricting them in fiscal 2015, which for most states started July 1, 2014. That’s the fewest states cutting or restricting benefits in at least 9 years. The most commonly added benefits were dental coverage, along with mental health and substance abuse services.

There was universal concern about certain drugs that cost hundreds or thousands per pill. Particularly, the report noted that a pill used to treat hepatitis C and cost $1,000 a pill generated complaints.

Specialists, nursing homes and managed care organizations are benefiting from states’ responses to the leveling economy. More than a dozen states paid higher fees to specialists and several sent more cash to the facilities caring for Medicaid recipients, according to the report.

31 states were cutting or freezing Medicaid hospital rates, compared to 19 that were increasing them. And 36 states either were not extending the Medicaid primary care pay raise that began last year under the Affordable Care Act and expires Dec. 31, or had yet to make a decision. Under the law, states had increased Medicaid rates to Medicare levels, a 40 percent average pay raise.

The increased payments to providers and improved benefits to recipients is three years in the making.