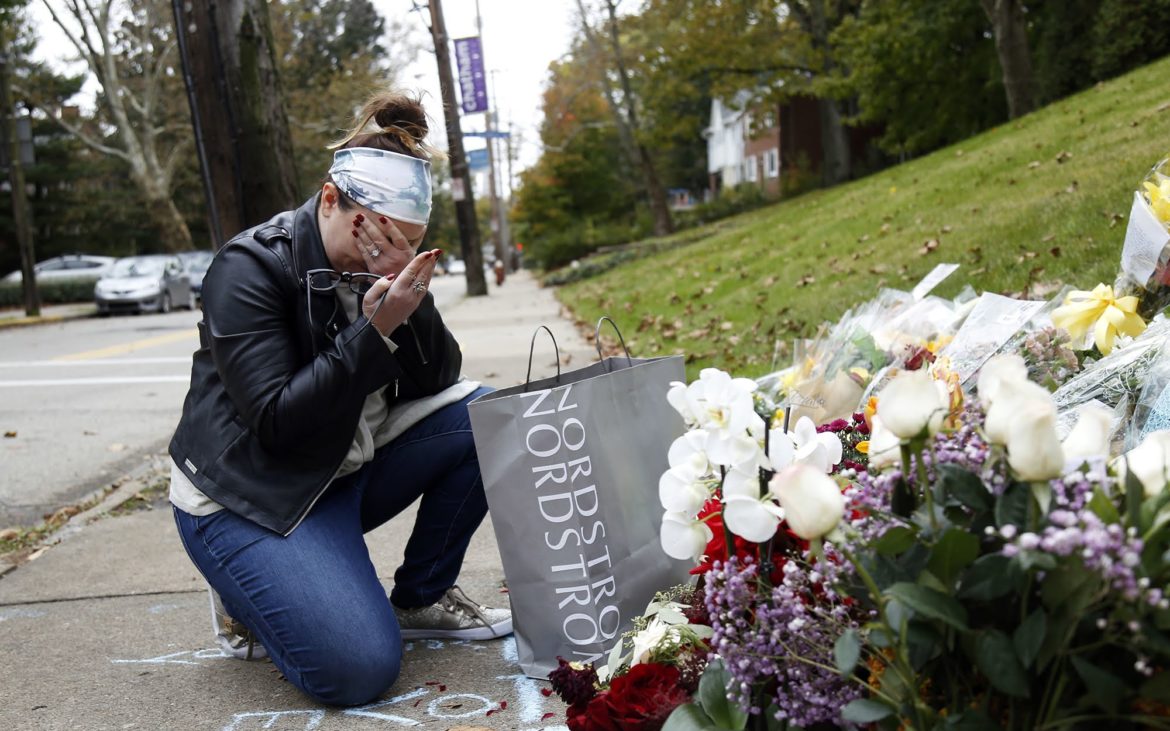 Samantha Ecker, 34, of Williamsport, Pa., kneels beside a memorial site at the intersection of Wilkins and Murray avenues on Monday, Oct. 29. Two days earlier, 11 people were killed at the Tree of Life synagogue in Squirrel Hill. Ecker, who celebrated her wedding Downtown the same day, laid bouquets from her wedding at the site. (Photo by Ryan Loew/PublicSource)

Last Saturday morning when Samantha Ecker found out about the mass shooting at the Tree of Life synagogue, she had just sat down to get her hair and makeup done.

Saturday, a day when 11 people were shot dead at the Squirrel Hill synagogue, was also her wedding day.

The 34-year-old, who grew up in the Pittsburgh area but now lives in Williamsport, Pa., was in town with her now-husband Eric for their wedding at the Fairmont Pittsburgh. Ecker used to work in Squirrel Hill as an optician for Eyetique, and she feels a deep connection to the neighborhood.

Not long after her phone started buzzing Saturday with news alerts, she also learned that family friends, who were supposed to be guests at the wedding, had one relative killed and another wounded in the shooting. 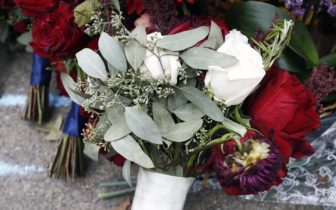 Samantha Ecker, who got married last Saturday, laid her wedding bouquet and three bridesmaids' bouquets at a memorial site at the intersection of Wilkins and Murray avenues. (Photo by Ryan Loew/PublicSource)

“I was shocked and horrified,” Ecker said.

As more information about the shooting unfolded, Ecker said it was impossible to turn away, creating an uncomfortable juxtaposition of grief amid the joy of her wedding day.

“I felt guilty throughout the day,” she said. “There was such a horrible thing that had happened, and I didn’t want to ignore it.”

On Monday afternoon, Ecker stopped by a memorial site at the intersection of Wilkins and Murray avenues. Kneeling down at the growing collection of flowers, notes and candles, she pulled from a bag four wedding bouquets, including her own, and added them among the other remembrances.

Before long, she and her husband would be back on the road to Williamsport, where she works as a copywriter for an architecture and engineering firm. Pittsburgh and the people affected by shooting at the Tree of Life have remained front of mind.

“Obviously I would’ve remembered Oct. 27 anyway,” she said, “but now it’ll be two feelings about that day.”