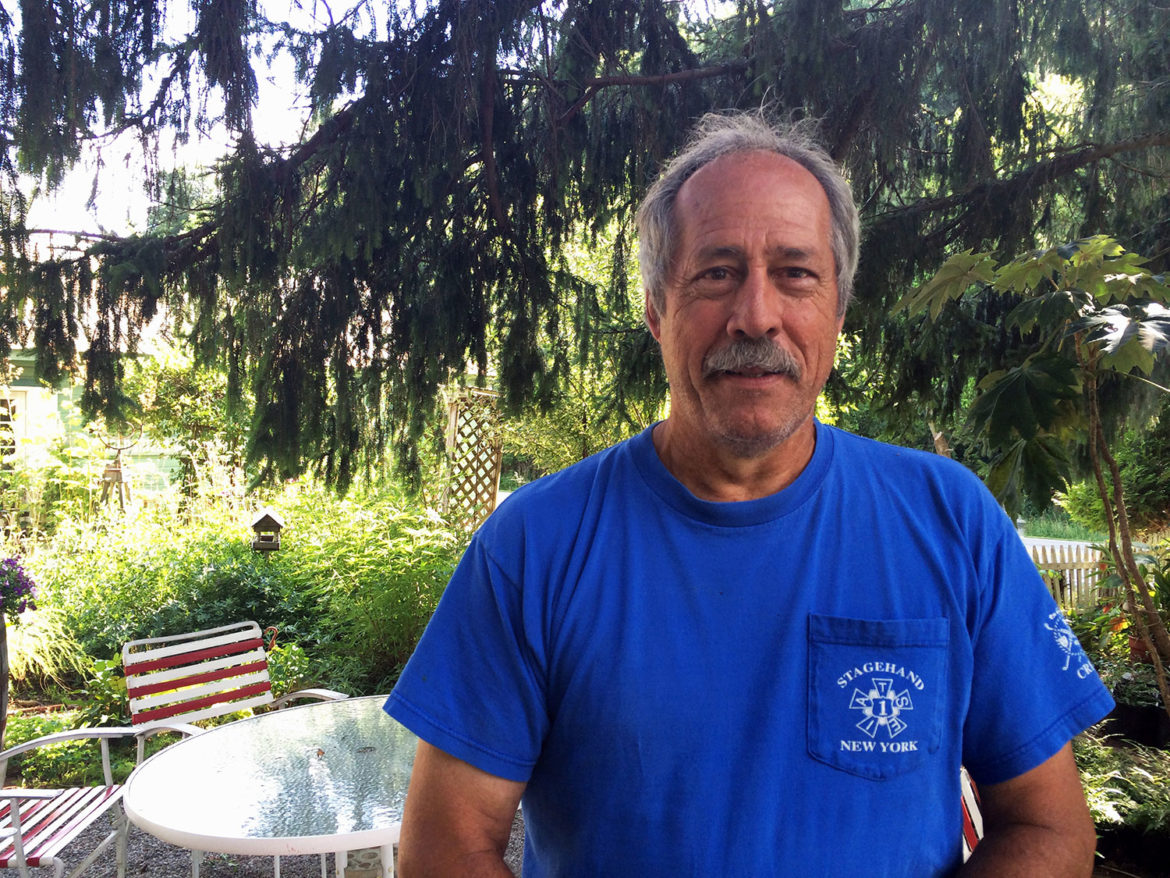 Marcellus Life is a PublicSource project that tells the stories of people living and working in Pennsylvania’s shale gas boom.

Leigh Shields refused to allow seismic testing for natural gas on his 88 acres in Spraggs, Greene County. He thought if he said no to the company asking, that would be the end of it.

Along with his wife, Lillian, and 27-year-old son, Alex, the family runs Shields Nursery and Shields Demesne Winery, just south of Waynesburg off Route 218. They grow juicy grapes in their vineyard, which get crushed and stored in old Kentucky bourbon barrels to create Hungarian-style wine called Melomel. To pay homage to their nursery business, their wines have plant names: Bloodroot, Irish Moss, Rosa Rugosa.

They live and run businesses in the heart of Southwestern Pennsylvania that’s part of the  Marcellus Shale gas boom. But Shields, who opened his nursery in 1982, said he tries to stay away from the industry.

“See, I'm in longwall mining country,” he said. “These giant corporations come in and do these things to you. So, if you've gone through it before, you have to be a little bit leery about everything that's happening around you. It's better not to be involved. Money is something; it's not everything.”

Shields isn’t a “fractivist.” He doesn’t attend meetings against the gas industry or carry signs in Harrisburg. He just chooses not to have drilling folks on his property.

He’s turned away those who came knocking over the past year looking to test for gas beneath his land.

Seismic testing is like doing an underground ultrasound to look for natural gas. The data is used by oil and gas companies to find the best places to drill.

It involves setting off explosives about 20 to 30 feet underground to record sound waves, which bounce off rocks and are used to map where the gas is. Some landowners in shale regions, including Shields, have concerns that setting off explosives could affect the environment or crack foundations in houses and infrastructure.

Shields said employees of Cougar Land Services, a Texas-based company that acquires seismic testing permits for the oil and gas industry, came to his house three or four times in 2013. He said the company was signing permits for Houston-based Geokinetics, a company that operates in 29 countries acquiring seismic data for oil and gas operators, according to its website.

Shields is just one example of the people affected by landmen in the area. Geokinetics recently contracted with oil and gas operators to perform seismic surveys across more than 200,000 acres in Greene County, according to legal documents. They’ve signed up nearly 4,000 property owners for the project.

Neither Geokinetics nor Cougar Land Services responded to requests for comment for this story.

“He came to me, a gentleman from Kansas. He had maps. He said they were going to do seismic testing on my property, almost like ‘We're going to do this.’ It was almost like a foregone conclusion,” Shields said.

Shields always sent the landman away with a stern “no” to signing a permit. The man eventually stopped showing up.

He didn’t think about it again until a year later, in June. While Shields was out in the nursery with customers, his son called and said there was a helicopter hovering over their family’s property.

Alex told him the helicopter looked like it was dropping something big.

“So I got in my tractor and I went driving up the hill and there it was, this big orange bag.”

He dragged the bag out of the woods and hauled it back to his house. When he returned to the woods, he found a large red X spraypainted on his property and pink ribbons tied to trees.

“So, I pulled all the ribbons down,” he said. “I had the bush hogger on my tractor. I bushhogged the thing [the red X] so you couldn't see it.”

A few days later he caught several men behind his house. They were digging holes in the ground. He presumed it was to bury explosives for seismic testing.

He told them to get lost and they eventually left. Later that day, he encountered a man working for Cougar Land Services.

“Well, you’re not getting it back,” Shields said.

Shields decided to keep the bag in defiance of the companies he saw as trespassing on his property.

Shields’ lawyer received a letter from Geokinetics asking him to return the bag. Shields refused, saying anything dropped on his property was his.

Then, in mid-July, Shields said Brian Siege, a state trooper, knocked on his door.

Shields said Siege told him that he’d be arrested if he didn’t return the bag.

He told the trooper he was surprised to see him there in defense of the company, instead of arresting the men who trespassed on his land.

Trooper Matt Jardine, a spokesman for the Pennsylvania State Police, said it’s against the law to keep someone's property if you know who it belongs to. (Shields knew the bag belonged to Geokinetics, therefore Siege was within his rights to tell him to return it.) By law, it’s called a “theft of lost or mislaid property,” Jardine explained.

Whether a company can enter a person’s property without warning them, that’s usually a civil matter, he said. If the property owner can prove the company trespassed, then it's a possible criminal matter, Jardine said.

Siege ended up leaving that day, without arresting Shields. He did not return phone calls from PublicSource.

Fearful that the police would arrest him, affecting his businesses, Shields gave the bag to his lawyer, who returned it to Geokinetics. He hasn’t heard from the company since.

Jardine said such situations happen frequently in Greene County, with helicopters dropping equipment on people’s land. Then, the landowner gets angry and calls police.

Who owns the gas?

Shields does not own the oil and gas rights to his land. In fact, he’s not sure who owns them.

In Pennsylvania, if a seismic testing company has permission from the person or company who owns the oil and gas rights or a driller leasing those rights, they have a reasonable right to access the land, according to Paul Yagelski, a Pittsburgh-based oil and gas attorney at Rothman Gordon.

If the company does not have that permission, landowners don’t have to allow testing, he said. If they show up, it could mean they’re trespassing.

After being told about Shields’ story, Yagelski said it’s a “bad scenario” when a company just shows up on someone’s land without informing them, even if the company represents the owner of the oil and gas rights.

Even then, if the landowner doesn’t want testing, “the proper way to do it would be for the seismic testing company to send a letter saying, ‘If you don’t allow this [seismic testing] to happen, we are going to go to court to force it,’” Yagelski said.

Shields said he never received such a letter from Geokinetics or any of the companies working for them.

Yagelski suggests that people approached by a seismic testing company demand proof the company represents the owner of the oil and gas rights.

A history of problems

Geokinetics has a history of causing problems in Greene County townships.

“We frequently hear about them trespassing and being disrespectful,” said Veronica Coptis, a community organizer at the Center for Coalfield Justice, an environmental advocacy group in Southwestern Pennsylvania.

Robert Keller, a supervisor in Morris Township, said Geokinetics was in his township three years ago.

“I dread the thought of them coming back,” Keller said.

Back in 2011, he said there were several instances of trespassing and significant damage to township roads (seismic testing companies use trucks to thump the ground, which sends vibrations into the subsurface that are used to map gas.)

“It was always a struggle to get what was owed to the township from [road] damage. We were only able to get some of that back,” Keller said.

Geokinetics filed a lawsuit in July against Center Township after the township passed an ordinance restricting its activities.

The ordinance requires companies like Geokinetics to file for a permit with the township, pay an application fee and post a bond for damage to township roads. It also requires that testing with charges be done at least 500 feet from buildings and water wells.

Geokinetics said the ordinance prevented it from performing testing in the area, according to court documents.

In affidavits, township officials said Geokinetics threatened landowners who wouldn’t sign permits, harassed them to enter their land and entered from other points when they were denied.

Equipment was air-dropped onto property and wires; debris and other equipment were left behind, causing damage to residents’ farm equipment. Complaints of trespassing were as recent as July.

“Past experience has shown that seismic testing has not been easy to deal with as a township,” Supervisor Seann McCollum said in an affidavit.

The lawsuit was settled in August in federal court in Pittsburgh. Geokinetics agreed to abide by the township’s ordinance, McCollum said in a phone interview.

As for Shields, he said he wants these companies to end its trespassing and bullying people.