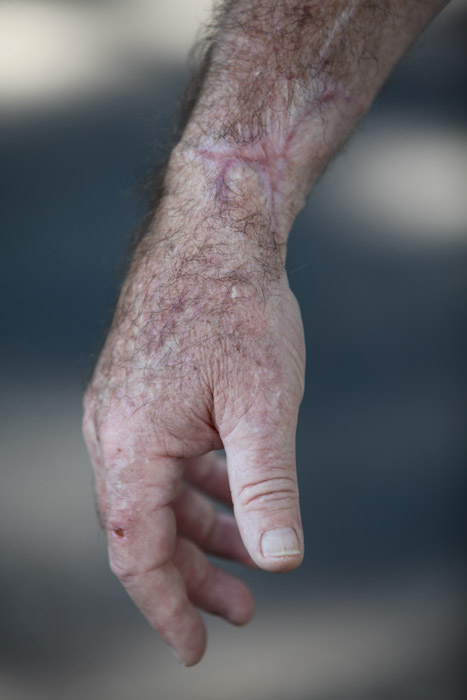 Steve Bowers of Cincinnati can no longer close his fist all the way after a hunk of his arm was scooped out during an accident in 2012 at Seven Springs Mountain Resort in Southwestern Pennsylvania.

Since 2008, according to state records, there have been 17 accidents, including Bowers’s on the Alpine Slide, twin tracks that riders go down on a sled.

Bowers, 56, said his sled flipped and his arm hit the hard surface of the track. He called for help, cradling flaps of his skin with his uninjured arm, he said.

“It took a big chunk of meat out” of his right arm, he said.

A medical bill described his arm as “shredded.”

Ride operators did not have cell phones, according to Bowers’s account, and the scene was chaotic.

By the time an ambulance arrived 30 minutes later, the ride was running again, he said.

A ride must be inspected after a serious accident, according to state law.

Seven Springs has multiple private inspectors and the slides are inspected daily, according to Anna Weltz, a spokeswoman for Seven Springs.

The accident was reported to the state and Seven Springs filed all of its safety inspection reports, according to a PublicSource investigation.

Riders on the slide control their speed with a brake lever and are instructed on its use, Weltz wrote in an email. “All riders are cautioned not to travel too fast down the track, but accidents can happen.”

But Bowers said he was not instructed about how to control the sled or cautioned about speed. Helmets were not provided and he said he saw kids riding the slides.

“There’s no safety instruction. There’s nothing. You’re on your own,” Bowers said.

Bowers has about 80 percent of his previous strength and can no longer hit his punching bag, he said.

Medical bills totaling thousands of dollars, including for surgeries and rehabilitation, have been paid by his insurance company.

He said he has not decided whether to sue the park.