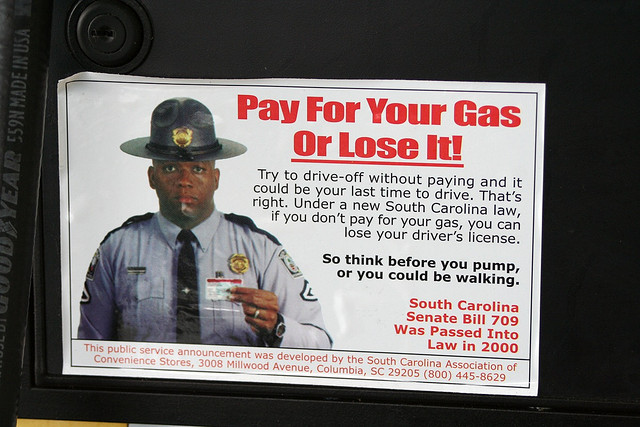 Many states suspend the driver’s licenses of people who have not paid court fines for relatively minor offenses, some of which aren’t even related to driving — a practice that an NPR investigation found disproportionately affects low-income populations.

The suspensions can result from court fines for unpaid traffic tickets, not paying child support or bouncing checks. Truancy, littering and shoplifting have also been at the core of many young people losing their driving privileges.

NPR reports that about 40 percent of license suspensions in the nation stem from these types of infractions.

From the report (part I and part II):

Jim Gramling, a former Municipal Court judge in Milwaukee, says people with money just pay off their fines — and avoid court. But people with little money often struggle when they get tickets.

"Often they're living lives where they can't afford to leave a job early, or at all, to go to court. They can't hire a lawyer, can't afford a lawyer. So they often let the cases go by default and don't challenge tickets that maybe should be challenged," he says. "It's tough."

This strategy of trying to get people to pay court fines by taking away their licenses led to a 2013 lawsuit by the American Civil Liberties Union, which asserted that Florida was discriminating against poor people.

About 200,000 drivers had their licenses suspended that year for not paying the fines. But a court has largely rejected the argument.

The practice became accepted decades ago as a tactic to get men to pay child support and as a deterrent to drug use.

Colleen Eubanks of the National Child Support Enforcement Association told NPR that suspensions have been effective in getting people to pay billions of dollars in child support.

The law was later expanded to make it acceptable to revoke licenses for plenty of other reasons that do not involve operating a vehicle.

But suspending someone’s license for these non-driving infractions has not been proven to work like it has with child support cases.

At least 75 percent of people who have had their licenses revoked just keep driving, according to the federal National Highway Traffic Safety Administration.

A University of Wisconsin-Milwaukee official told NPR that the policy drives inequality.

John Pawasarat, who runs the university's Employment and Training Institute and studies Milwaukee's poor neighborhoods, says one of the biggest barriers to getting a job is not having a driver's license.

"Two out of three African-American men in this neighborhood, of working age, don't have a driver's license … and are consequently unable to access the jobs that are beyond the bus lines."