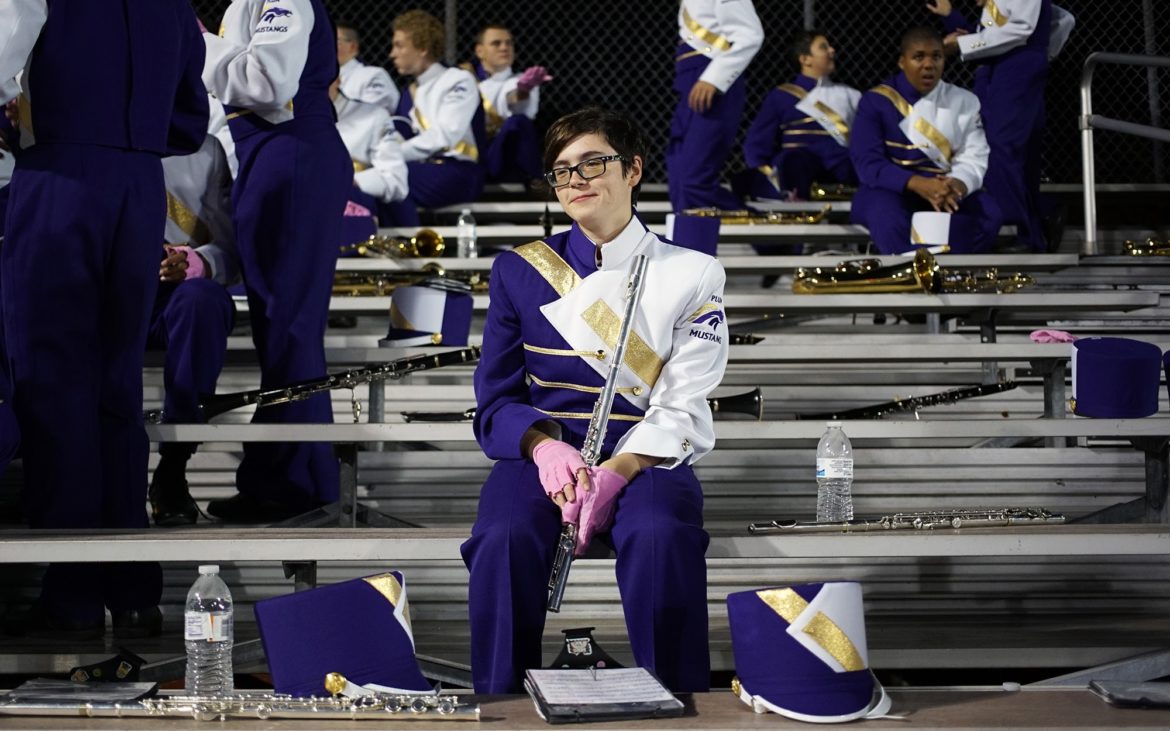 Hailey Helpenstell plays the flute for the Plum Senior High School band. Here, she is pictured sitting in the stands with fellow bandmates during an Oct. 27 football game against Fox Chapel Area High School. (Photo by Ryan Loew/PublicSource)

Bullying is still alive and well in high school, and it is especially brutal for LGBTQ students. Take Park, one of my Plum Senior High School classmates whose name I’ve changed here for privacy reasons. He identifies as a bisexual, transgender male. For Park, things that cause anxiety for ordinary high schoolers are aggravated by students who target him for his gender identity.

Park has almost become accustomed to students lobbing slurs at him because it happens so often. He said he can’t use either bathroom without getting weird stares. When he has to participate in swim class, looks -- ranging from curiosity to disgust -- are common. The scrutiny is exhausting and upsets him. One day, he said, “I nearly fell down the steps when I was shoved by someone calling me names, but I tried shrugging it off and going to my bus.” On the bus, he said students flung broken pencils around him. Park has experienced many upsetting moments on his bus route. Twice, other students have thrown gum at him and it’s landed on his clothing.

That’s a problem. Not only do students experience bullying, but many have to go through it feeling like lack support within the school. Everyone deserves to have a safe, inclusive learning environment where they can find people to go to for information and guidance. That’s why it’s important for us to learn what rights all students have and how we can use them to ensure safety and understanding.

I talked to another LGBTQ student who attends my school to better understand the challenges queer students experience in the school environment. Lex (whose name I also changed) identifies as pansexual and nonbinary. Being nonbinary means that Lex doesn’t identify as a boy or girl. Because of this, Lex prefers to be addressed as they/them instead of him or her.

Lex said the harassment has not escalated to the physical. “I’ve never been physically attacked at school, but I definitely get stares and names thrown at me. I get that it’s probably a little odd to see my outfits change so drastically throughout the week. One day I’ll be in a button-down shirt with a bow tie and jeans and the next I’ll be in a dress, but there’s no reason to give me dirty looks in the hallways. It’s also not OK for people to purposefully use the wrong name and pronouns when addressing me. I just want to be respected as you would respect any other person.”

Lex said there was  also a double standard in how relationships are received for heterosexual students vs. LGBTQ students. Public displays of affection are more accepted when the students are boy and girl.  “I would never go to the guidance counselors, though. They wouldn’t do anything about it. They don’t really care.”

As you can see, both students felt like the counselors at Plum Senior High School would not be able to help them.

“I believe one of the main problems for LGBTQ youth at my school is a lack of representation.”

I took the accounts of these two students to a school counselor, who preferred not to be named. She explained the basic procedure that counselors go through when a student comes in with a problem. “I try and give them a few different options. We can either do nothing; we can try talking through the problem with the people involved; or we can involve the principal if there’s a safety issue,” she said.

We discussed different ways to increase communication between school officials and the students. She said they try to get to know the students better by being more involved throughout the school; counselors, she said, will visit classes and they also work as cafeteria, bus and hallway monitors.

One of the biggest challenges she saw concerning the LGBTQ youth at Plum was drama and fighting within the community itself. Because they’re a minority, she said, they need to support and help one another to make things better for the community as a whole.

So, what legal rights are given to the LGBTQ community in Pennsylvania? For starters, everyone has the same rights under the Constitution. This includes freedom of speech and expression. There is also a federal law, Title IX, that bans discrimination based on sex.

Plum Senior High School has a few passages from the student handbook that could be useful for the LGBTQ students. Take, for example, this passage from the dress code: “The school will become involved in the matter of dress when an individual student exercises poor judgment in his/her mode of dress; that is, the dress interferes with the learning process, constitutes a hazard to the student or others, or is deemed inappropriate for the school setting by the staff and administration.” This code shows how vague the student handbook can be. For instance, what if a student who was perceived as male wore a dress? As long as the dress is a certain length, this doesn’t appear to directly break any rules. But it’s left to opinion if it is “deemed inappropriate.” It would be very helpful for school administrators to further elaborate on this in future iterations of the handbook.

Many schools have harassment and bullying policies that can be found in student handbooks. Plum has policies that prohibit both. The administrators define bullying as anything that creates a threatening environment or interferes with the student’s education or “orderly operation” of the school. The harassment policy protects against “verbal, written, graphic or physical conduct relating to an individual’s race, color, national origin/ethnicity, gender, disability, sexual orientation or religion” when the conduct is “severe, persistent or pervasive,” creates a toxic learning environment or interferes with other students’ rights. The best way to find out what policies your school has in place is to ask a school official or to read any student handbooks your school may have.

I believe one of the main problems for LGBTQ youth at my school is a lack of representation. It’s almost as if this community of students is swept under the rug. Even in non-discrimination policies, LGBTQ students are overlooked: “The Plum Borough School District is an equal opportunity education institution and will not discriminate on the basis of race, color, national origin, sex, and/or handicap in its activities, programs or employment practices as required by Title VI, Title IX, and Section 504.” It just doesn’t make sense to have a policy that prohibits bullying/harassment of LGBTQ students but then leave them out of the nondiscrimination policy.

School rules are vague, and there’s so little support.  I think many of these issues, at least on the school level, can be resolved with more communication between students and officials at the school as well as a safe place for students to seek help and acceptance, such as a gay-straight alliance club. Members of the LGBTQ community as well as their allies must have a voice in our community or nothing will ever be changed.

Hailey Helpenstell is a sophomore at Plum Senior High School. She enjoys math and plans to become a physicist. She can be reached at leehelp02@gmail.com.