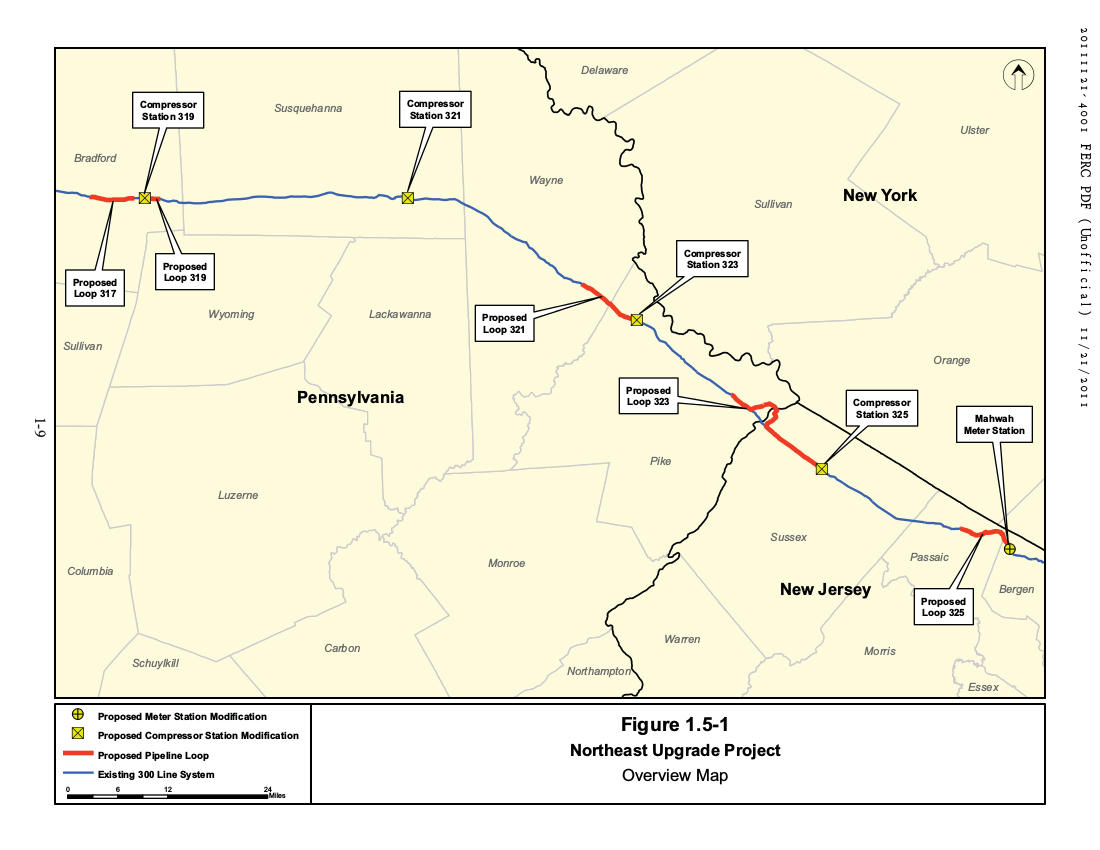 Between June and October 2013, Kinder Morgan, the largest energy infrastructure company in North America, paid a local Pennsylvania police department more than $50,000 to patrol a controversial pipeline upgrade. The company requested that the officers, though officially off-duty, be in uniform and marked cars. Kinder Morgan’s aim, according to documents obtained by Earth Island Journal, was to use law enforcement to “deter protests” in order to avoid “costly delays.”

It’s unclear if the police department instructed its officers to explicitly “deter protests” but, if officers carried out Kinder Morgan’s request, their conduct would clearly violate the First Amendment rights of protesters.

“It is politically and socially entirely inappropriate for a private company to be able to hire a police department and use its officers to try to intimidate protesters of one stripe or another,” says David Rudovsky, a civil rights lawyer in Philadelphia and a Senior Fellow at the University of Pennsylvania Law School.

In a letter to the Eastern Pike Regional Police Department (EPRPD) dated May 1 2013, Duane Jones, Kinder Morgan’s corporate security manager, acknowledged the “controversial nature” of the pipeline project and requested that the local police “provide a visible presence to create a deterrent effect.” The officers began conducting patrols in June 2013 and were paid $54.80 an hour for their off-duty services. The patrols were terminated in October of that year.

The off duty officers were employed in addition to a 24/7 roving private security patrol.

Two weeks after Kinder Morgan sent the letter (described as a “letter of engagement for police services”), the Eastern Pike Regional Police Commission voted to accept Kinder Morgan’s proposal to contract with the department. In an email from the EPRPD to Off Duty Services, a Texas based private security company that administered the contract, the department said that its attorney would “cc you a copy of the contract.” In response to several public records requests, however, EPRPD has said that no contract exists.

“If they are actually being instructed to deter protest that’s not okay,” says Mary Catherine Roper, deputy legal director of the ACLU in Philadelphia, who reviewed Kinder Morgan’s letter. “That’s just flat out unconstitutional.” If law enforcement, or any other government agency, set out to deter protest it would be in violation of the First Amendment’s protection of freedom of speech.

In an emailed statement, Kinder Morgan disputed that characterization. Richard Wheatley, a spokesperson for Kinder Morgan, said the request was made after the company obtained an injunction against protesters who had staged several acts of civil disobedience to block construction of the pipeline.

“The EPRPD was engaged specifically for the purposes of enforcing the law and the terms of the injunction,” he wrote. “Kinder Morgan has no interest in limiting constitutionally protected free speech rights and legitimate, lawful protest activity.”

During the contract period, however, several local residents and activists reported being followed by the police for doing little more than monitoring pipeline construction activity. One volunteer monitor was charged with trespassing and disorderly conduct after taking photographs of sediment drainage near Cummin’s Creek.

Kinder Morgan, which was spun off from the energy giant Enron in the mid 1990s, has recently become embroiled in several pipeline conflicts. In British Columbia they’ve had to delay their Trans Mountain pipeline project, which would carry tar sands oil from Alberta to the Pacific Coast, after encountering fierce opposition from First Nation’s groups, environmental activists, and local officials. In Massachusetts the company was forced to reroute a section of pipeline because of intense local opposition.

The Tennessee Gas Pipeline upgrade (sometimes called the Northeast Upgrade) greatly expanded Kinder Morgan’s capacity to transport natural gas to markets throughout the northeast by adding sections of pipeline in Pennsylvania and New Jersey. However, because it cuts through large portions of state forest, sensitive wetlands, and the Delaware River watershed, the project has encountered resistance from local landowners and environmental groups.

Kinder Morgan subsidiary Tennessee Gas Pipeline Co. received Federal Energy Regulatory Commission (FERC) approval in late 2012 to build the 127-mile pipeline extension. The ruling was quickly challenged by several environmental groups, including Delaware Riverkeeper Network and the Sierra Club, which argued that FERC had violated the National Environmental Policy Act by reviewing the various extensions as separate projects rather than cumulatively. In June 2014 a federal appellate court ruled in favor of the environmental groups declaring that, “FERC impermissibly segmented the environmental review in violation of NEPA.”

But by that time the construction of the pipeline, which began in February 2013, was already completed.

Soon after Kinder Morgan began felling trees and clearing large right of ways through state forests and public land, Delaware Riverkeeper Network recruited volunteers to monitor the company’s construction activity. Volunteers were asked to take photographs and document any violations especially in sensitive areas like wetlands or stream crossings. Reports on these violations were then uploaded to the FERC website.

“The goal was to watchdog the construction activity,” says Faith Zerbe, monitoring director for Delaware Riverkeeper.

In late February 2013 two local activists, Alex Lotorto and Allison Petryk, helped organize a campaign of civil disobedience, including a two-week tree sit, in an attempt to block or slow construction of the pipeline. A few weeks later Tennessee Gas Pipeline Co. filed a preliminary injunction against the protesters and up to 100 anonymous “Jane Does” and “John Does.” The judge ruled in the company’s favor and granted a special injunction for the duration of the pipeline upgrade.

Kinder Morgan says that its contract with the EPRPD was intended to enforce this injunction. The company also alleges that the letter was written after “months of coordinated, documented, illegal attempts to interfere with pipeline construction activities.”

During the court hearing, Duane Jones, Kinder Morgan’s head of Corporate Security, said that he was a “firm believer in First Amendment rights,” and that he had no problem with protesters as long as their actions were “within the legal limits of the law.”

However, Jones’s May 1 2013 letter to the EPRPD seems to contradict this statement and suggests that Kinder Morgan was interested in curbing all forms of protest that would potentially delay the pipeline project.

“In an effort to deter protests and prevent delays,” he wrote, “Kinder Morgan desires to employ officers from East Pike Regional Police in an off duty capacity to provide a visible presence in our construction areas…. The objective is for a uniformed officer to be seen frequently making spot checks of our construction areas and be available to respond should protestors attempt to block access to those sites.

In April 2013 Kinder Morgan served Delaware Riverkeeper with notice of the court order and accused one of its volunteer monitors, Joe Zenes, of trespassing. A local resident with a background in environmental science, Zenes had been an active volunteer monitor since 2012. On August 14, 2013, following a major rainstorm, Zenes went out in a vest and hardhat to take photos of the company’s construction work near Cummin’s Creek. In just over 10 minutes he took 39 photos documenting sediment drainage into the waterway. Eight days later he received a summons from the EPRPD and was charged with trespassing and disorderly conduct for allegedly yelling obscenities at the pipeline workers. The officer who filed the charges, Matt McCormack, was employed that day as on off-duty officer conducting patrols for Kinder Morgan.

“They did exactly what they wanted the patrols and lawsuit to do,” says Faith Zerbe. “They deterred us.”

Although Kinder Morgan has terminated its contract with the EPRPD, it continues to pump money into local institutions. The company has given more than $70,000 to the local school district in the form of technology grants and foundation support. In 2013 Kinder Morgan put up more than $40,000 to keep a local beach open in Milford Township. "This is a great example of good citizenship being demonstrated by a corporation that intends to be a good neighbor for many decades to come," national park service superintendent John Donahue said in a press release.

And in mid-April the neighboring township of Milford announced that its police department had received a $10,000 grant from Kinder Morgan for “needed upgrades and equipment.”

The Northeast Upgrade represents a tiny fraction of Kinder Morgan’s roughly 84,000 miles of existing pipeline in North America. Yet resistance to relatively small-scale projects like this is becoming increasingly common. With more than $18 billion currently invested in expanding its pipeline and infrastructure network, Kinder Morgan’s engagement with local communities and law enforcement will be closely watched.

Adam Federman is a contributing editor at Earth Island Journal. He is the recipient of a Polk Grant for Investigative Reporting, a Middlebury Fellowship in Environmental Journalism, and a Russia Fulbright Fellowship. You can find more of his work at adamfederman.com.