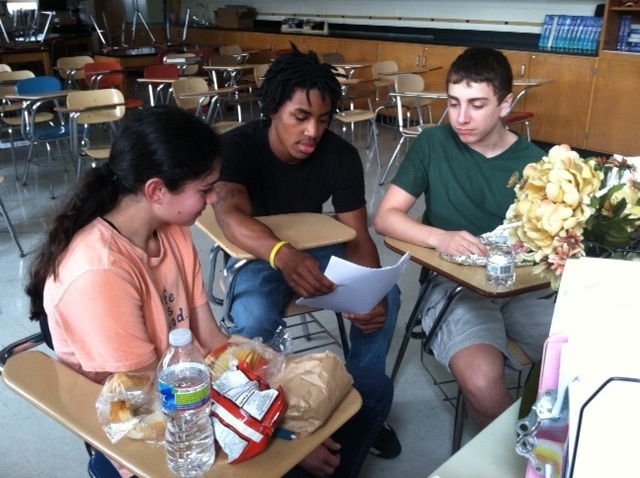 As a freshman, Garrett Walsh’s path to the Promise looked muddled. He was initially in the  danger zone at Pittsburgh's Allderdice High School, which could put him out of reach of up to $40,000 in scholarship money available to Pittsburgh Public Schools students through The Pittsburgh Promise.

To get more students like Walsh Promise-ready, the district rolled out the Promise-Readiness Corps (PRC) program during the 2010-11 school year. Piloted at eight high schools and implemented full-time at Allderdice, Brashear, Carrick, Langley and Oliver, the program pairs the best teachers, student mentors and counselors with some of the district’s most vulnerable ninth-and-tenth-grade students.

Pittsburgh Public Schools estimates that 35 percent of ninth-graders in the district do not graduate from high school. Forty-five percent pursue higher education, but just 15 percent graduate from college.

One aspect of the PRC – student mentors – put Walsh on a better path. Senior students meet with small groups of underclassmen once a week and supervise freshman lunch.

“When I first came here, I didn’t know anyone because I came from a different school district,” Walsh said. “Knowing a senior when I got here helped a lot. I have a problem getting my homework done. So when they bring it up at lunch, it’s a lot easier to get it done with someone helping than it is at my house.”

The first full year of the PRC shows better grades and attendance for freshmen. But for the program to continue and expand, the cash-strapped district -- facing yearly budget deficits in the tens of millions and dipping into a reserve fund soon to run dry -- must find long-term financing for the expensive program.

Will Graham, who had a rough start himself as a freshman and now has a scholarship to Slippery Rock University, thinks he can help current underclassmen  as a student mentor.

“I think [current ninth-grade students] have a benefit that we didn’t have,” Graham said during a round table discussion among students, PRC teachers and administrators at Allderdice that was arranged by the school system for PublicSource. “We felt when we came to high school that the seniors were on top and didn’t care about us. But we’re letting freshman know that we care about you and we want you to succeed."

‘A failing grade is not a heads-up’

The Promise-Readiness Corps is part of the larger Empowering Effective Teachers plan, crafted by the district and the Pittsburgh Federation of Teachers and using a $40 million grant from the Bill and Melinda Gates Foundation. The goal of the teachers plan is to have more than 80 percent of students meet a 2.5 Grade Point Average and a 90 percent attendance rate required for a Promise scholarship and then complete a college degree.

Sixty teachers were chosen for the Promise-Readiness Corps program. The teachers add an extra 45-minute period to their day to discuss student needs or meet with kids individually or in small groups.

Those meetings allow teachers to stay on top of student performance, attendance and behavior and establish relationships with kids, said Michele Papalia, a Social Studies teacher at Allderdice.

“We have conversations about, ‘What’s going on? Why are you struggling? Do you need tutoring? Can we help you get organized?’” Papalia said. “In the past, a certain percentage of kids would have fallen through the cracks if they didn’t get that individual attention.”

Students get colored slips reporting on their academic progress every two weeks. Green means they’re Promise-ready, yellow is a warning that they’re behind or slacking off, and red means the path to the Promise needs to be adjusted.

India West, an Allderdice ninth-grade student, said:  “I had a D in biology, and they let me know how serious it was. Then I met with the biology teacher and I brought it up to a B.”

“It’s really helpful when a teacher gives you a heads-up – and a failing grade is not a heads-up,” Lane said during an interview at her Oakland office.

Paying for the PRC

Getting more students Promise-ready isn’t cheap. Promise-Readiness Corps teachers are paid an additional $9,300 per year. The teachers are also eligible for a bonus of up to $20,000 each if they exceed expected results in student academic achievement, attendance and course credits over the two-year looping period.

Part of the TIF grant is being used to cover the $558,000 in additional teacher compensation in 2011-12 and the potential $1.2 million in bonuses after the next school year for the PRC, said Pittsburgh Public Schools spokeswoman Ebony Pugh. The district also won a three-year, $14 million federal School Improvement Grant.

The grants won’t last forever, however. As a directive of the TIF grant, the district must find support or resources to sustain the Promise-Readiness Corps, Pugh said. Those resources must be found as Pittsburgh Public Schools faces serious long-term economic challenges.

“The question is, ‘How can you lay off some staff while giving bonuses to other staff?’” Lane said. “I think [the Promise-Readiness Corps] is an investment in getting more of our students through high school and ultimately to and through college or training.

“We have to address our fiscal issues and probably do some things we’d rather not do,” Lane said, “but we still want to have a district that does well by its students. Being financially successful but academically unsuccessful – what’s that worth?”

Promise-Readiness Corps teachers instruct the same group of students in both ninth and tenth grade in a process called ‘looping.’

Success in ninth grade is crucial. More students nationwide fail ninth grade than any other grade, and many students who repeat ninth grade eventually drop out, according to the National High School Center.

“You’ve got kids that didn’t get well served by the schools in the past that need to get caught up now, and the only way to do that is to build stronger personal ties and a stronger level of trust, ” said Dr. Alan Lesgold, professor and dean of the School of Education at the University of Pittsburgh. “Looping preserves relationships formed for that second year.”

The program also helps the mentors, who solidify their learning by teaching and being examples.

“When you’re an upperclassman, you carry yourself a lot better because you know what you do affects what the younger kids do,” Graham said.

Between middle school and high school, scores on the Pennsylvania System of School Assessment test plummet. According to Pittsburgh Public Schools data, 67 percent of eighth-grade students scored proficient or advanced in reading in 2008, but that figure fell to 56 percent when those students were tested again in 11th grade in 2011. Fifty-seven percent of eighth-graders scored proficient or advanced in math in 2008, but just 45 percent as 11th graders in 2011. (Ninth graders are not tested.)

Parker thinks a lack of college-ready habits like studying daily, taking notes and planning out long-term assignments is a major cause, and one that the PRC looks to fix.

“Organization is a huge academic issue that our kids face,” Parker said. “Kids have their lives organized for them in middle school. In high school, it’s dramatically different.”

The small discussion groups of students, teachers and mentors also help to cultivate the critical thinking skills necessary for college and beyond, Lane said.

The number of ninth-grade students at Allderdice, Brashear, Carrick, Langley and Oliver meeting the minimum GPA and attendance requirements for a Pittsburgh Promise scholarship has increased significantly at all schools compared to last year.

During the pilot year of the PRC in 2010-’11, 39 percent of ninth-graders at those schools were eligible for the Promise, according to Pugh. Through the first semester of 2011-’12, 54 percent of them were eligible for as much as $40,000 over four years at any accredited public or private post-secondary school in Pennsylvania.

“It gives us some evidence that the PRC is making a difference,” Lane said. "Fifty-four isn’t high enough – we know that. We’re on the right track, but clearly we’re not finished.”

At Allderdice, the percentage of Promise-eligible ninth-graders increased from 51 during the pilot year to 66 so far in 2011-’12. Parker and others keep pushing students who are close to being Promise-ready.

“So many of our kids are in that bubble range,” Parker said. “I have a student who had like a 2.375 and a C in gym, and he plays a sport. The message to him is clear: If you get a B or an A in gym, you’re talking about $5,000 per semester. It’s a constant conversation.”

Lesgold thinks the Promise Readiness Corps is proving worth the investment.

Students in PRC schools “were quite a ways behind,” Lesgold said. “If you simply say, ‘We’re going to keep cutting the budget,’ that says that the mistakes of the past … are simply going to be the excuse to screw a lot of kids.”

The Foreword, the student newspaper of Allderdice High School, has posted two recent articles about changes affecting the school:

Flurry of activity as district feels the financial squeeze

The Pittsburgh Foundation and the Heinz Endowments, which are funders of PublicSource, are major supporters of The Pittsburgh Promise.